Film review: A planet of hope 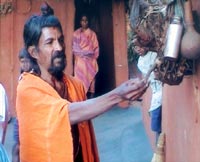 Kalahandi district in Orissa often hits the news, but for all the wrong reasons; hunger, poverty and mass migration to other states chief among them. To rescue the villagers from penury and provide them a dignified life, the Indian National Trust for the Welfare of Tribals (intwot) has initiated an integrated programme for the self-sufficiency of the tribals. The documentary depicts this effort in detail.

Simply providing food packets to the thousands of starving people in the district is not a satisfactory solution. Instead, intwot trains the tribals in systema-tic cultivation of herbs and enhances their income through small and micro-enterprise development. The film emphasises the need to organise the rural community by following the joint forest management approach.

This method not only gives them a reliable source of income but also conserves folk health practices, folk knowledge and local forests. The tribals are schooled to document their traditional knowledge. A nursery of about 10,000 different medicinal plants has been developed in the district. The villagers have offered 12 acres of land to take this project from kitchen gardens to the market. A serious marketing effort complements the development of entrepreneurial skills among the tribals. Traditional health practitioners too are involved in the project in a big way. The sustainable harvesting of medicinal herbs has already triggered development in the region.

Interviews with poachers bring to light how these brigands have been taking the tribals for a ride. One poacher (face not shown) claimed that cultivation of medicinal herbs was not feasible as there was no demand, belying his own profession. The poacher also said he was doing the tribals a big 'favour' by buying herbs from them.

The documentary is directed by Amarendra Kishore, executive director of intwot. It is enlivened by melodious tribal folk songs. A traditional dance adds to the charm with participants skipping around in a circle.