Fish in the net 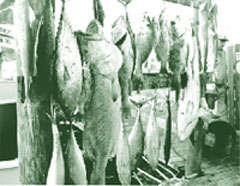 a global network of marine reserves should be established to halt the alarming decrease in fish stocks, say leading marine scientists. In a 'scientific consensus statement', they have urged for a fishing ban in 20 per cent of global seas by creating specially protected marine parks in these areas.

The statement issued by 150 marine scientists at the annual meeting of the American Association for the Advancement of Science, is based on a four-year study of existing reserves that cover 0.01 per cent of the world's oceans. According to the scientists, the stocks of several species have decreased on a large-scale. These include several tuna species and cod, the population of which have declined by 90 per cent.

Conservation groups in the us say that in 2000 the number of endangered fish species has increased from 98 to a record high 107. It includes popular commercial and sport fish like the red snapper, summer flounder and Atlantic swordfish.