Brahmaputra and five other rivers flow above danger mark; low lying areas of Kaziranga and Pobitora wildlife sanctuary under water 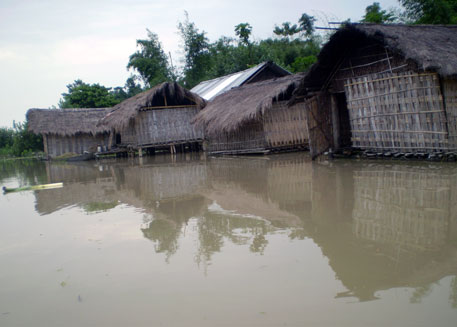 The flood situation in Assam has turned critical with 14 out of the 27 districts facing inundation.  Government officials said that four persons have died in the floods so far and over 343,000 people in the state are either stranded or have been displaced.

The districts affected by floods are: Barpeta, Bongaigaon, Dhemaji, Jorhat, Lakhimpur, Sivasagar, Nalbari, Sonitpur, Morigaon, Kokrajhar, Dibrugarh, Kamrup, Golaghat and Dhubri.
The floods follow incessant rainfall over the past few days, which has led to sharp increase in the level of water in rivers.

According to reports from the Assam State Disaster Management Authority (ASDMA), the rivers Brahmaputra, Dhansiri, Jia-Bharali, Kopili, Puthimari and Beki are flowing above their respective danger mark.

“Till date, the flood has affected 41 revenue circles, and has affected as many as 684 villages in the 14 affected districts,” said Nandita Hazarika, deputy secretary, ASDMA.
ASDMA further states that the government has opened 27 relief camps in six districts, where over 34,000 people have taken shelter.

Deforestation in Arunachal silting up rivers

The water resources minister also blamed the poor condition of the embankments in the state for the severe flood.

“Most of the embankments have outlived their life-span of 25-30 years, and these requires urgent repairs. Besides this, of the 4,447-km network of embankments in the state, stretches of 1,000 km and 2,400 km are extremely vulnerable,” said the minister.

The flood has also taken a toll on the agricultural fields in the state, and according to reports from the ASDMA, crop area of over 23,938 hectares has been affected.

Speaking to Down to Earth, Assam agriculture minister, Nilomoni Sen Deka, said that the damage to the cropland is severe, and said that farmers will be adequately compensated.

“The agriculture department will ask the deputy commissioners of all the flood-affected districts to provide a report on the extent of damage to the agricultural land in their districts, and based on the reports the department will take steps to suitably compensate the affected farmers,” said Deka.

Deka, however, added that the process of estimation of the actual losses to agriculture will begin only after the flood recedes, as more damage might occur in the coming days.

The agriculture minister also added that his department is mooting the idea of providing hybrid seeds in the coming season so that they will be able to make up their damage to some extent.

The affected farmers, however, say that the government is doing too little, too late.

“We are eager for a permanent or a long term solution, as otherwise we will soon be forced to take to the streets,” said Bubai Bora, a farmer from the Mauli sub division in the Jorhat district in the state.

He said that every year the same thing happens—flood occurs, farmers are severely affected and after that the government tries to take some steps like providing some relief and seeds for the next farming season.

“This is something purely temporary, and it doesn’t help us in uplifting our economic condition,” said Bora. 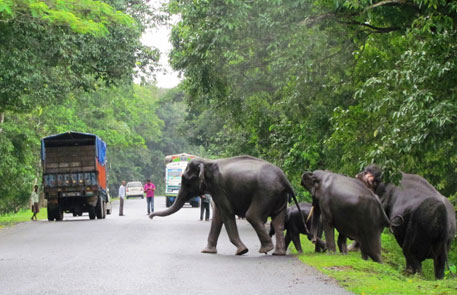 "Large portions of the park are still under water, but the water level is stable," said S K Seal Sarma, a forest official posted at Kaziranga.

Forest officials said animals from the park have already started moving out of the park to reack elevated land in the adjoining Karbi Anglong district in the southern part of Kaziranga. To reach Karbi Anglong, the animals have to cross National Highway-37, a highly risky proposition.

In an effort to regulate traffic on the highway and protect the animals, the forest department has introduced time cards. Assam environment and forest minister, Rakibul Hussain, said that nine checkposts would be in place along the 52km stretch of the park for compliance with the time card rule next year. 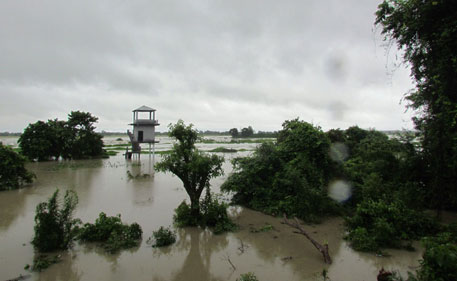 “Vehicles will have to travel at 40km per hour from today (Monday). We will first set up two checkposts (Kohora and Bagori range), which will be manned by the transport department from next year. Subsequently, we will set up seven more. Those violating traffic regulations will be either fined or their licence cancelled,” said Hussain.

Hussain also added that more forces will be sent to Kaziranga as poachers might see it as an opportunity to poach animals which may come out of the park to highlands.

Incessant rains over the past couple of days have triggered floods and landslides in several districts of Arunachal Pradesh. This has severely disrupted road communication in several areas in the state.

In the capital town of Itanagar, two children of a family were killed and another was injured when a wall fell on their home because of a landslide.

“There was heavy rain on August 15, and this had triggered landslides and had also washed away roads and culverts at several locations,” said Hage Appa, PWD (highway) chief engineer of Arunachal Pradesh. Appa added that in several areas in the state, supply of drinking water has been affected. “In Itanagar and Naharlagun, including Nirjuli, water supply has been disrupted as a result of damage to water supply pipes because of landslides,” he said.

Minister in charge of PWD, Gajen Gadi, said the government is taking steps to restore the road communication on a war footing. “I have instructed a team of engineers from the department to look into the matter, and I have been told by my officials that communications will be restored soon,” said Gadi.

Gadi assured that the minor repairing works related to restoration of communication will start immediately, while the major works will start after the end of the monsoon.  Lohit district is among the worst affected areas in the state. Floods have inundated agricultural land and habitation in the district.

According to a report from the district administration, the water level of Lohit and Digaru rivers is above the danger mark. Ferry services have been suspended. Report from the district administration of the Lower Dibang Valley states that over 200 families have been displaced because of flooding in the Dotung river, inundating a village in Paglam circle.

Tayeng said the affected families are staying in makeshift shelters on PWD roads.

Meanwhile, taking note of the severity of the flood situation in the district, deputy commissioner of the Lower Dibang Valley district, Shiv Kumar, has constituted a team to visit the flood affected areas to ascertain the damage.