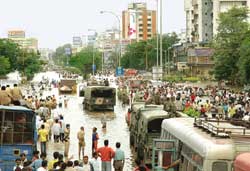 india is facing the worst kind of floods in some of its most dammed states. Maharashtra, Madhya Pradesh, Gujarat and Andhra Pradesh top the list of states with the maximum number of dams. Chhattisgarh and Orissa have also been affected. Releases from dams are leading to floods, as is happening in the case of Ukai and the Sardar Sarovar Project in Gujarat, Jayakawadi and Koyna in Maharashtra, Narayanpur in Karnataka and Srisailam and Nagarjunasagar in Andhra Pradesh.

Gujarat
Surat district in Gujarat has been rated the worst affected. According to latest media reports, water levels have receded in many parts of Surat but certain areas of the district have been completely cut off from the rest of the state. Power and water supply remain disrupted in about 60 per cent of the city but train services between Mumbai and Surat have been restored.

Floods started from south Gujarat when Surat was completely inundated for three days beginning August 7. Over 90 per cent of the city was marooned by the waters of river Tapi when around 9 lakh cusec water was released from Ukai dam, 120 km from Surat. Due to incessant rains in the catchment areas of Tapi in Maharashtra, the dam received more water than what the authorities anticipated. 250 human casualties aside, According to the state government estimate, the total loss of the city is close to Rs 25,000 crore.

Andhra Pradesh
In Andhra Pradesh, flash floods caused by the overflowing of the Krishna river has led to local authorities evacuating more than 50,000 people in the Krishna district. The rising vegetable, petrol and kerosene prices have added to the burden. The key causes of these flash floods have been heavy rains and unplanned releases of water from dams.

Maharashtra
Seven districts have been affected -- Nanded, Chandrapur, Vashim, Kolhapur, Sholapur, Thane and Aurangabad. Two incidents of boats capsizing, because of overloading, have occurred. None of the occupants survived. The challenge remains on the movement of a large volume of people shifting temporarily to higher ground.

Chhattisgarh
The tribal people's problems have been compounded by the devastation caused by the floods in the Bastar district and as a result of this, they are presently living on the highway.

Orissa
Two districts have been affected by floods and according to latest reports from the Meteorological Department, heavy rains are predicted in Jharkhand, Chhattisgarh, Telangana and north coastal Andhra Pradesh. Orissa is on alert. Rumours of cyclones led to people being evacuated but no cyclone has occurred yet.