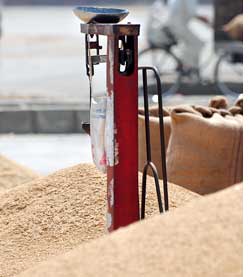 in the first week of April, thousands of people stormed the presidential palace in Haiti, throwing stones and demanding the resignation of President Rene Preval over soaring food prices. In reasonably prosperous Malaysia, the ruling coalition was nearly ousted by voters who cited food and fuel price increases as their main concerns. The us and Japan have begun rationing and the un secretary general Ban Ki Moon has termed the jump in food prices as a "threat to global security". A World Bank report blamed food price rise as the main reason for skyrocketing inflation all over the world. In India too, the United Progressive Alliance government felt the heat from its allies and opposition over rising food prices that spiked inflation to a three year high of 7.41 per cent in the last week of March.

Food inflation stood at 5.4 per cent in the week ending March 29.The government has banned the export of wheat, rice, pulses and oilseeds. But then food prices are not the only reason for inflation in the country some of it is also driven by rising steel and metal prices (see box Steel wears thin). The government is contemplating a ban on export of these commodities.

Export bans, however, have produced only a marginal effect--inflation came down from 7.4 per cent in the last week of March to around 7.14 per cent--and the government has most often found itself short of answers while having to explain the rise in food prices. The agriculture minister blamed it on food shortage caused by changing eating habits. More south Indians were eating wheat, he said. Commerce minister Kamal Nath reasoned that more Indians were getting two square meals a day, hence the shortfall in food.

Experts have more tangible reasons. "The government procurement was below target in 2007 despite record production," said Abhijit Sen, economist and the head of a four-member committee examining the impact of futures trading on agricultural prices. Others blamed the shortfall on hoarding by private players and said that the government must strengthen the public distribution system. Anand Kumar, a social scientist at the Centre of Studies for Social Systems, Jawaharlal Nehru University (jnu), recommended that the Essential Commodities Act be imposed on all large private traders. He was speaking at a meeting called by the United National Progressive Alliance, a coalition of opposition parties, and the left parties on April 19.

Futures trading in agricultural commodities came in for a lot of criticism at the meeting. Such trading has been a contentious issue for some time. In May last year, the government banned futures trading in rice, wheat, urad and tur (lentil varieties), and constituted the four-member Sen committee.

Sen told Down To Earth that the committee's report, likely to be submitted by April end could not find conclusive evidence to blame future trading for price rise. However, he refused to support futures trading. Media reports suggest dissension in the Sen committee. Other experts are also against futures trading. "This is not the right time to expose foodgrains to future trading. The move will lead to more speculation and further increase food prices," said Jayati Ghosh, chairperson of the Centre for Economic Studies and Planning, jnu.


The government has taken some action to improve procurement. In mid-April, railway minister Lalu Prasad Yadav announced that the railways will carry foodgrains procured either by the Food Corporation of India (fci) or by state government agencies, and not private players. The announcement was crucial because it came at a time when the government was making its wheat procurements for 2008.

Raising the minimum support price (msp) of wheat from Rs 750 per 100 kg to Rs 1,000 per 100 has also helped. The government has so far procured nearly nine million tonnes of the 15 million tonnes of wheat it intends to procure for the public distribution system--it fell way short of this target last year. Latest comparative figures aren't available. But if March figures are anything to go by, procurement has been better this year. fci had procured 7.6 million tonnes of wheat by March 22 this year compared to the 5.6 million tonnes it had procured by this time last year. "Stocks are likely to be in better condition this year," Sen said. But he also said that there have been cases of farmers holding back their produce in Punjab. "This could be either because they anticipate a further rise in msp or simply because the wheat is too wet from spring showers," he said.


International developments, however, suggest little cause for optimism. A World Bank report Rising food prices Policy options and World Bank Response anticipates a constant increase in food prices till 2015. Surging inflation has intensified the North-South rift over use of biofuels. At a meeting in Singapore, India's finance minister P Chidambaram blamed the us policy of diverting food grains such as corn for producing bio-fuels for the spurt in global food grain prices. According to the un's Food and Agriculture Organization, 20 per cent of the corn produced in the us was diverted for biofuel in 2007.

German chancellor Angela Merkel has come out in support of biofuel and has held changing food habits of Indians and Chinese responsible for the global price rise. "If a third of one billion of Indians eat more than once a day, it adds up to 300 million people. That's a large part of the European Union," Merkel said. Germany is Europe's largest biofuel producer.

But biofuels have their critics in the West. Lester Brown, president of the Washington-based Earth Policy Institute, for example, says that countries are diverting increasing amount of arable land for biofuel, fuelling a price hike.


Some economists ascribe the inflation to skyrocketing fuel prices (us $115 per barrel on April 15). Others have expressed concern at the weakening us dollar. This has pushed the prices of American imports and has transmitted inflation to the dozens of economies that link their currencies to the us dollar. "Reducing taxes is the only way out but if international prices are on a surge, a domestic monetary policy will not work," explained Surjit Bhalla, managing director, Oxus Research and Investments.

Both globally and in India, stress is being laid on increasing agricultural production. Agriculture scientist and parliamentarian M S Swaminathan suggests that India must increase its food production to tide over high prices. "Farmers must be trained in multiple cropping and empowered to utilize schemes like Rashtryia Kisan Vikas Yojana, National Horticulture Mission," he said.

Swaminathan stressed that if each of the four crore farmers in India was trained to increase foodgrain production by 500 kg, the total production would increase by 20 million tonnes. That could avoid India help control the rising food price, he said.