Seventy-five-year-old Puttamma is angry at her daughter-in-law. “She’s seven months pregnant and look how weak she is. I advise her to eat anagone soppu [Alternanthera sessilis] but she doesn’t listen,” complains Puttamma.

Her daughter-in-law has to take iron supplements every day because she is severely anaemic. “Anagone soppu was a regular part of our diet and we never faced such problems. It is rich in nutrients and medicinal properties. We even worked in fields during pregnancy,” Puttamma recollects.

Puttamma belongs to Karnataka’s Soliga community and lives in Gorasane village of Chamarajnagar district. The village is close to the Male Mahadeshwara Hills of the Western Ghats, where this aquatic plant is found in abundance from November to April. People in her village use the leaves of the plant to fight anaemia, jaundice, night blindness, piles, infertility, strengthen the nervous system and to boost hair growth. It is also recommended for lactating mothers as it is said to enhance the production of breast milk. In rural areas of South India, it is quite common for people to gift its leaves to neighbours and to pregnant women.

The Soligas have been living in forested villages for ages and are known for their traditional knowledge and food culture. Though the government runs special nutritive food schemes for Soliga households and provides them grains under the public distribution system, the Soligas still suffer from malnutrition. Puttamma has her own theory behind the health problems of her tribe.

Puttamma says she has seen a significant change in the lifestyle and food system of the younger generation. “When we were young, we consumed at least 50 varieties of greens, over 40 varieties of wild fruits and over 30 vegetables and crops in the forest and on our farmland. My parents and I would collect 15-odd varieties of mixed green leaves and cook them with salt, chilly, tamarind and garlic in the evening.

The dish was eaten with ragi (finger millet) ball at least thrice a week. We rarely had rice or apples and oranges,” says she. But people in the village today are not likely to collect wild greens, fruits, tubers and vegetables from the forest or even from their backyards anymore. They consume rice and rice-based foods, black tea and packed snacks,” she says. Puttamma recommends that hard working people should eat lots of green leaves. “These are god’s gift,” she says. Research shows that the Soligas suffer from sickle cell anaemia and it seems that in anagone soppu and other wild foods, they have found the best way to overcome their genetic deficiencies. But changing dietary patterns made them malnourished. 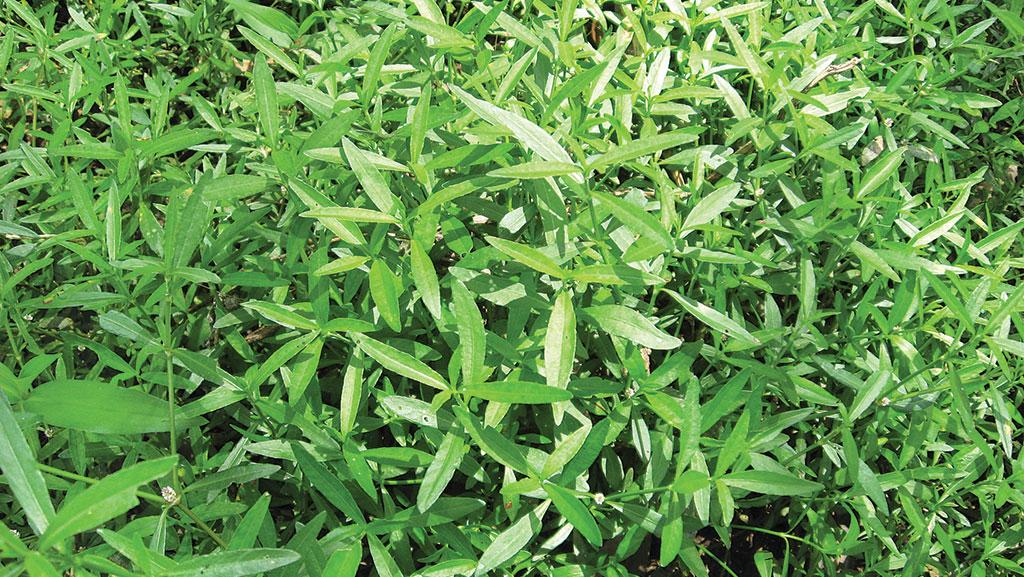 The use of anagone soppu is quite common in traditional medicines. In the Siddha medicine system, this plant is called food medicine and eating its leaves fried in ghee is said to be beneficial for the eyes.

Recent studies too have corroborated the health benefits of the plant. A study published in the International Journal of Pharmacognosy and Phytochemical in 2014 states that the leaves have anti-microbial properties and help in healing wounds and ulcers. The entire plant has anti-oxidant properties, the study says. The National Institute of Nutrition, Hyderabad, recommends its use during pregnancy to overcome anaemia because it is rich in iron, calcium, phosphorus and vitamins C and B complex.

Though the consumption of the plant has gone down, in rural areas of South India, anagone soppu dishes are still eaten at least twice a month. In urban households, people eat it, on an average, once a month. In the rainy season, when it is in abundance, the leaves sell for Rs 20 per kg and the price increases to Rs 40 in summers. In big cities like Bengaluru and Mysore, vegetable vendors sell it for Rs 30-60 per kg and sell 15-20 kg a day, earning Rs 600-1,000. People who collect the leaves , however, get only Rs 10 per kg.

In a country like ours, where malnourishment and anaemia is widespread, anagone soppu can be a good source of nutrition, especially for pregnant women. It is time we encouraged its use.

The author is Program Associate at the Ashoka Trust for Research in Ecology and the Environment, Bengaluru

This article was first published in Down To Earth's print edition (dated June 1-15, 2018)