Bitter bounty: Why karela leaves can be a good harvest off your kitchen garden

Bitter gourd leaves not only have medicinal and nutritive properties, they can be added to tasty recipes as well 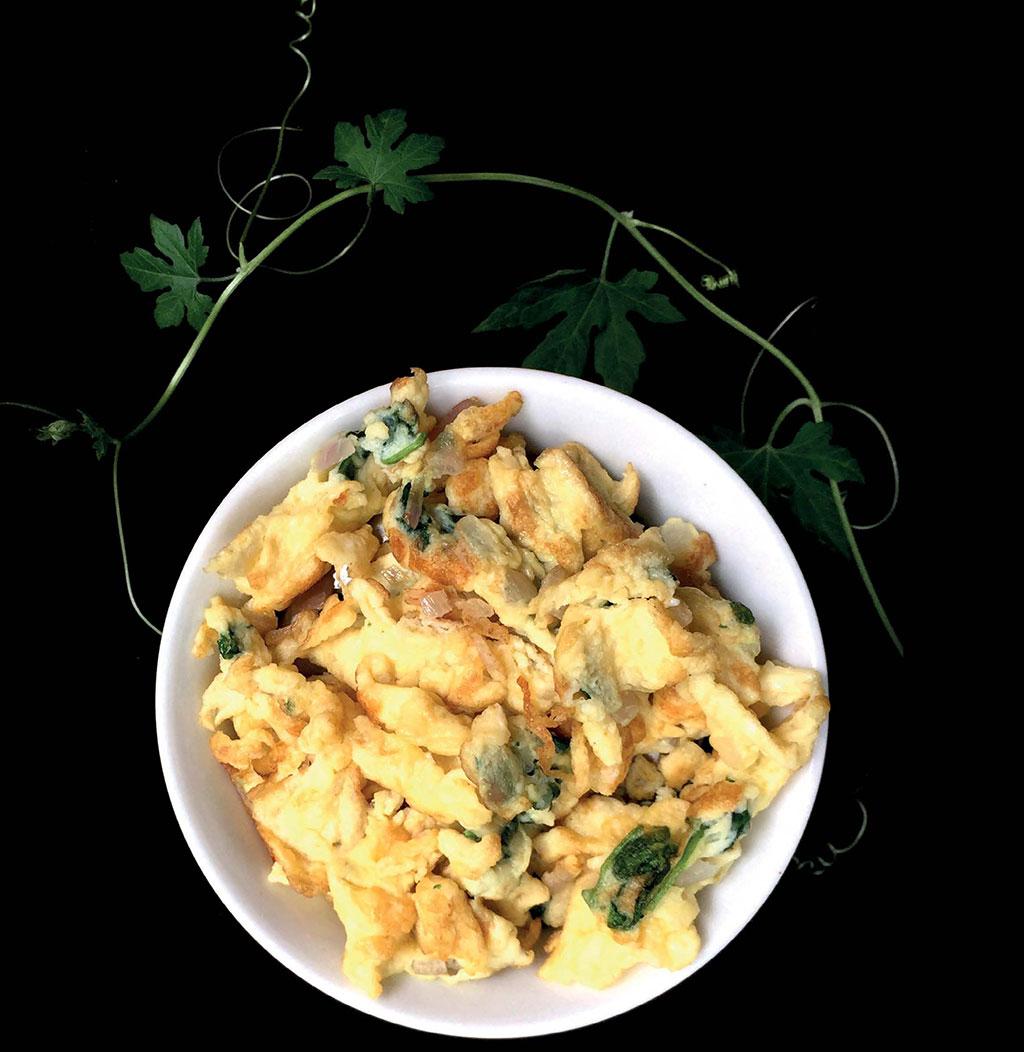 Bitter gourd leaves can be prepared in a number of ways. Here, it has been included in scrambled eggs (Photograph: Vibha Varshney)

It was a clear case of home gardening gone wrong. I had planted bitter gourd seeds in a flower pot hoping to get gourds, but as there’s not enough sunlight in my home in Delhi, all I got was a profuse harvest of leaves. The only consolation was that the plant is pretty — the slender climber has lobed leaves and delicate tendrils and works well as an ornamental. A friend suggested that I make pakodas from the leaves. I made a batch dipping the whole leaf in a rice and chickpea flour batter. They were tasty enough for me to plant more seeds next year for a fresh harvest.

Bitter gourd or Momordica charantia is part of the diet regime suggested to diabetics as it can lower blood sugar levels. Usually, the juice of the raw gourd is used for the purpose. However, the gourd could counteract with diabetes medication and reduce blood sugar levels to dangerously low levels. Pregnant women, too, are advised to avoid it as it can lead to abortions.

While most Indians love the bitter taste of this vegetable, some cannot understand why it should be consumed. They use recipes to reduce the bitterness. They boil the gourd and squeeze out the bitterness. Or they peel the gourds and apply salt on them so that it releases the water which can be then squeezed out. It is then prepared whole or stuffed with a mixture of spices.

Usually, raw mangoes and dried mango powder are used liberally in these recipes. Chips prepared by frying thin slices of bitter gourd with a sprinkle of chaat masala are very popular. These methods manage to reduce the bitterness a bit, but it cannot be removed completely. It is better to just embrace the bitterness and enjoy it. These gourds flood the market during summer season. This is the time to consume them as the seeds are soft and don’t have to be removed before cooking.

Other than the gourd itself, the leaves too are bitter and useful to control blood sugar levels. As the leaves are not as bitter as the gourd, this may be more palatable to people who do not like the taste of the vegetable. Tea prepared from both fresh and dry leaves are quite popular among diabetics.

Its medicinal properties do not take away the fact that the leaves are a versatile ingredient for perking up the plate. In Odisha, the leaves are added to sautéed onions and then cooked rice is added to it. The mild bitterness works well with starchy rice.

In West Bengal, the leaves are added to the traditional shukto dish when the vegetable is not available. Similarly, there are recipes where the leaves are used along with potatoes. The leaves can also be used as stuffing for a paratha. They complement chicken and fish recipes too, and can be used raw in salads or added to boiled dal. I like them with eggs too (see recipe).

The leaves are nutritious and rich in minerals like potassium, sodium, calcium, zinc, magnesium, iron, manganese and copper, and vitamins like carotene, tocopherol, folic acid, cyanocobalamin and ascorbic acid along with some traces of vitamins B3, B6, D and K.

Bitter gourd belongs to the cucurbitaceae family, which includes cucumber, melon and pumpkin. Although the exact origin of Momordica genus is unclear, most experts agree that the centre of domestication was in eastern Asia, possibly eastern India or southern China. Many species of Momordica are endemic to different parts of the country but Momordica charantia is distributed across India, except in the northeast region.

Despite the fact that the bitter gourd has been extensively described in Ayurvedic texts, the health benefits have attracted many biopirates who have patented products prepared from this vegetable from our backyards.

In 1999, a case of a company run by non-resident Indians patenting the extracts of the gourd for its anti-diabetic properties strengthened the government’s resolve to document the medicinal properties of indigenous plants and share with patent offices around the world. Before this, the US patent office had also given a patent on the wound-healing properties of turmeric, which too is prior knowledge as this has been used in India for centuries for this purpose.