When Shruti Bai Parmar was elected sarpanch of Saad village last year, she had an unusual ally to thank: black chickens called Kadaknath. She says she could bear the election expense because of the profit from selling the almost extinct poultry breed endemic to Jhabua district of Madhya Pradesh. A few years earlier, Parmar had been struggling to sustain her family of five. With little irrigation and frequent droughts, crop losses had made survival harder for the majority in Jahbua, one of the poorest districts in the state.

In the same village, Ditu Devi has had to borrow money at high interest rates for basic needs such as her daughter’s education fee and medicines. Today, both Parmar and Ditu Devi are better off thanks to Ka-daknath, or kali mans. One bird can fetch them Rs 800.

The idea of rearing and selling Kadaknath as a livelihood, Parmar says, emerged from a meeting organised by Krishi Vigyan Kendra (KVK), Jhabua. A Central government initiative to improve the lives of farmers, KVK, Jhabua, is playing a pivotal role by supplying 5,000 chicks every month to local farmers and poultry farm owners outside the state. 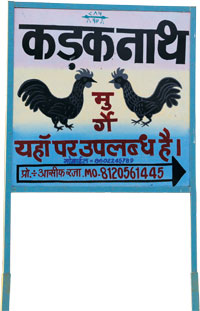 Reared by tribal communities of Bhil and Bhilala, Kadaknath, a black chicken with black flesh and bone, was on the verge of extinction. In 1998, Down To Earth reported that due to over-consumption and a very low reproduction rate, the breed (see ‘The unique bird’) could disappear (‘Ro-oster calls no more’, DTE, 15 May 1998).

Today, there are more than 300 poultry sheds in Jhabua, and farmers are trai-ned in rearing and setting up their own infrastructure. Under the National Agriculture In-novation Project, the KVK offers help in constructing low cost poultry sheds; training on advanced technologies of pou-ltry production; optimum feed and balanced diet; vaccination and exploring markets.

Last year, Parmar earned Rs 1.8 lakh from selling Kadaknath. She purchased 400 chicks for Rs 60 each and sold 350 chickens at Rs 800 each within five months.

In 1983, the Madhya Pradesh government had set up a Kadaknath breeding farm in Jhabua to save Kadaknath but had failed. In 2009, the KVK conducted a study and established slow growth on natural feeding and more than 50 per cent mortality rate as the reasons for the crisis. The KVK then engaged 10 farmers and proved that mortality could be reduced with optimum feed and balanced diet along with proper vaccination. When two experts from the Indian Council of Agricultural Research saw the results, they were impressed. They sanctioned Rs 50 lakh for setting up a hatching facility in Jhabua.

Other than selling Kadaknath, other livelihoods have also emerged since the revival of Kadaknath. In Saad, there are more than 335 families in the poultry business. Ditu Devi, president of Gram Sangathan Samiti of Saad, says she earns around Rs 4,000-5,000 from guiding farmers on how to take care of poultry and vaccinating chicks, not just Kadaknath. 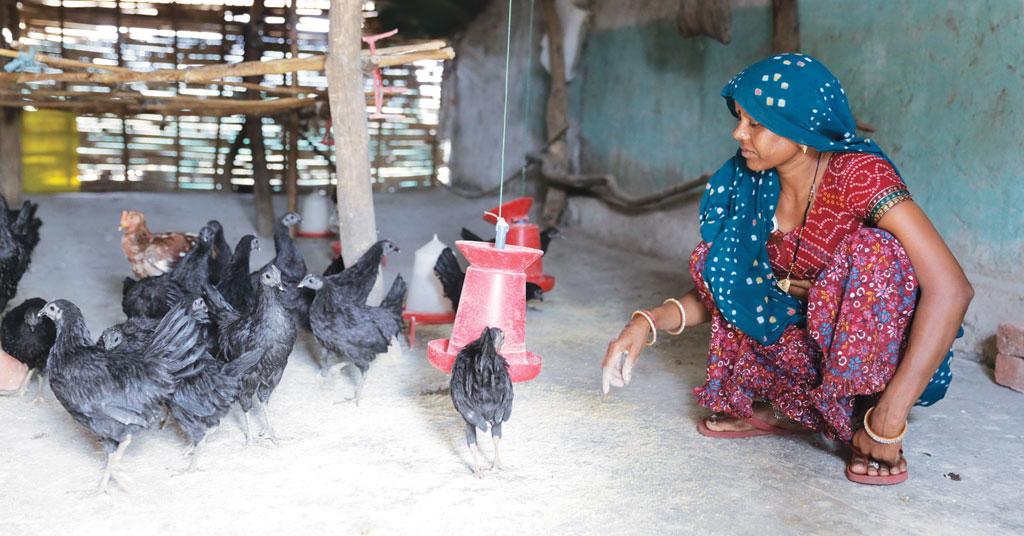 Many like Ditu Devi who supplement their income by providing veterinary services are called murgi sakhi and pashu mitra in their villages. Nilesh Desai from Sampark, a local non-profit says there is one or more murgi sakhis for each village and 140 mitras who vaccinate at least 0.1 million chickens in a month.

Trained by Sampark, the mitras or guides are responsible for providing vaccinations, deworming, and motivating other poultry rearers to adopt improved practices. This community intervention is supported by South Asia Pro-Poor Livestock Policy programme for strengthening indigenous poultry-based livelihoods in a selected village cluster in Rama block of Jhabua.

About 22 km from Saad, in Padalghati, farmer’s response to the business of Kadak-nath is changing. Moonsingh Sehlot, a farmer who got a shed from KVK says that on a yearly investment of around Rs 45,000, he earns more than Rs 1,00,000.

Sehlot has been in the business for three years and leased 4 hectares of land from the money he earned from selling Kadaknath. Seeing Sehlot’s success, many farmers are planning to venture into the business.

Who would have thought that the revival of an indigenous poultry breed would be mirrored in a district’s economy?