Food scientists are now trying to give this neglected ancient crop a makeover, given its high nutrition content 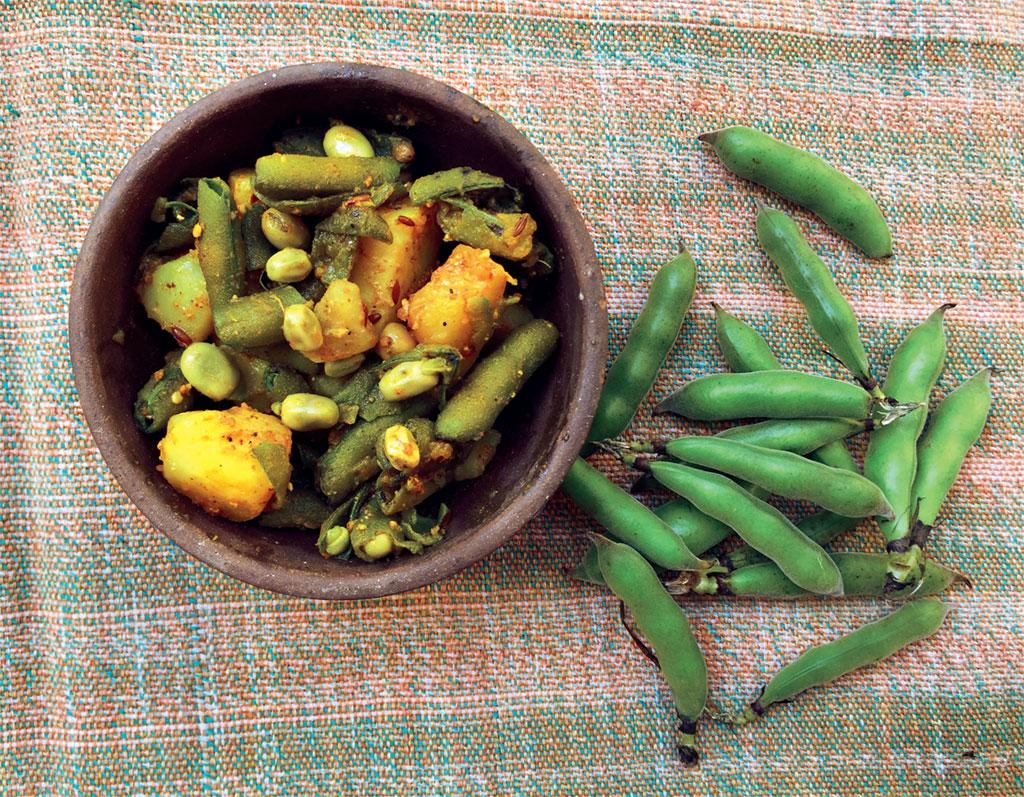 Faba bean can be prepared and eaten as a green vegetable or as a pulse (Photograph: Vibha Varshney)

As the days grow longer and the air loses its chill, vegetable vendors in Delhi are seen pressing regular customers to buy a green bean that they call bakla phali. “Bahut kam aata hai bazaar mein (It rarely appears in the market),” they insist.

The vegetable, also called faba bean, fava bean or simply broad bean, is one of the earliest crops to be domesticated. French and Israel scientists have found records of a wild variety of the bean that was grown in the northwestern region of Israel some 14,000 years ago.

They published their findings in Scientific Reports in 2016. For centuries, the crop, also known as Vicia faba in scientific lexicon, was widely cultivated as a staple food in Mediterranean countries, India, China and Pakistan.

Its demand and consumption have, however, seen a perceptible decline in recent decades. The use of faba bean is now limited to largely feed livestock or to preparing traditional dishes such as medamis (stewed beans), falafel (deep fried cotyledon paste with vegetables and spices), bissara (a soup or dip made with the seeds) and nabet soup (boiled germinated beans).

In India, V faba is grown in an unorganised manner in colder regions such as Uttarakhand. Preparation varies with state; in Uttar Pradesh, soft green pods are cooked with potatoes, while in Uttarakhand the beans are de-stringed, boiled and fried.

The dry seeds are treated like pulses and cooked mixed with those of other legumes. People in Bihar even boil and fry green seeds with onions and tomatoes, to eat with flattened rice. Roasted and salted seeds of the bean is also consumed as a snack in northern Europe and the United States, though in limited quantities.

Food scientists are now trying to give this neglected ancient crop a makeover, given its high nutrition content. For instance, the bean is a good source of the amino acid levodopa or l-dopa, a precursor to dopamine, the “happy hormone” that plays a crucial role in a person’s ability to think and plan.

A 2015 article in the journal Neurologia says 100 gm of fresh faba beans can contain 50-100 mg of l-dopa and can be recommended for the treatment of Parkinson's disease. Faba bean also comes loaded with protein, which accounts for 25-35 per cent of its seeds.

Scientists are thus developing recipes and food products from the bean that can be used as a vegan substitute for meat and milk. Several companies are making pasta from faba beans, which they sell as a gluten-free alternative to pasta made from wheat.

“It is a promising crop as it can be consumed as a green vegetable and as a pulse,” says Bhatt, who has co-authored the book Faba Bean (Vicia faba L.): A Potential Leguminous Crop of India.

The crop is also beneficial for farmers. It not only grows well in harsh cold climates, its root nodules house microbes that fix atmospheric nitrogen in soil and thereby improve soil fertility.

Go easy on the bean

One should however exercise caution while consuming faba beans as they also contain chemical substances like tannins and phytates. While the former can cause stomach irritation and liver damage, the latter hinders absorption of nutrients.

The beans also contain the chemical compounds vicine and convicine, which can cause a severe reaction called favism in those who are deficient in an enzyme, glucose-6-phosphate dehydrogenase. The reaction could be life-threatening in children.

As vicine and convicine destroy red blood cells, a person suffering from favism shows telltale symptoms like dark urine and jaundice. A 2021 Nature Plants study says some four per cent of the world’s population is susceptible to favism.

These anti-nutritional compounds also affect the performance of non-ruminant animals feeding on faba beans, by interfering with the utilisation of ingested nutrients.

Traditionally, people consume the seeds after roasting, boiling, soaking in water, germinating or fermenting so that the harmful compounds area easily removed.

Now, most faba bean breeding programmes aim to eliminate the compounds in the crop itself. In 1988, researchers in France reported finding one variety with lower amounts of the molecules. Since then, this trait has been introduced in several modern cultivars.

In 2015, ICAR’s Research Complex for Eastern Region, Patna, released two varieties of faba beans with low tannins and phytates. The first, Swarna Suraksha, is suited to rain-fed areas and has 40 per cent higher productivity.

The other, Swarna Gaurav, has been developed for regions with assured irrigation — Bhatt says irrigation increases the productivity of faba beans by 1-1.5 times — and where intercropping is practised.

It has recorded a 36 per cent advantage over the test variety and is also rich in minerals like iron, manganese and zinc. Greater promotion of such varieties can increase the appeal of faba beans.

This article was first published in the 16-30 April, 2022 edition of Down To Earth