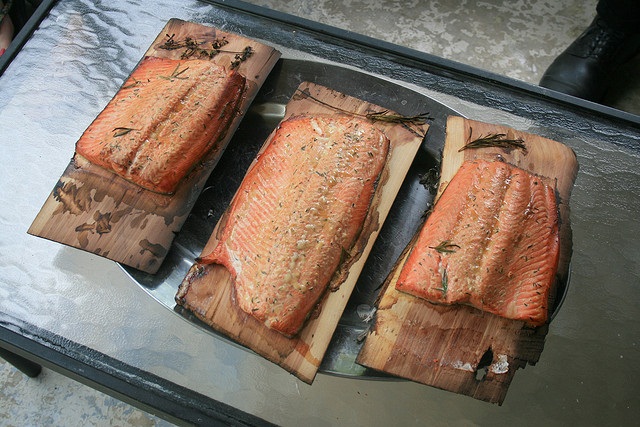 It’s out in the open and maybe ready to feature on your dinner plate soon. A genetically-engineered AquAdvantage salmon has been approved as fit for consumption, media reports say. It is the first genetically-altered animal to reach the American supermarkets.

This particular salmon is an Atlantic one modified to grow fast with the help of genetic sequences from a Pacific Chinook Salmon and the eel-like ocean pout.

The result we have got is a genetically-engineered fish that grows at twice the rate of an Atlantic salmon, reaching a harvestable size in about 18 months instead of three years.

The fish are stored in land-based tanks in Canada and Panama and are reproductively sterile. The eggs are fertilised in Canada and transported to Panama where they are grown in inland tanks, news reports say. However, this is a risky business. If the fish were able to escape during the journey, they could interbreed with wild fish.

Despite the foreign breeding, the fish are supervised and regulated by the US Food and Drug Administration, media reports add.

The engineered recombinant DNA that causes the salmon to grow more quickly than farm-raised salmon meets the definition of a drug, and hence, the regulation.

Reactions are pouring in as usual, but at present there is something of a deadlock. However, under the present laws, the salmon won’t be labelled as genetically modified.

The media is trying to raise awareness about the fish. The salmon’s approval has inspired The New York Times to say in an editorial that the fish should be labelled, reversing a 2013 position that genetically modified foods do not need mandatory labels. “Consumers deserve to know what they are eating,” the editorial board wrote, with regard to the AquAdvantage salmon.

The company behind the making of the fish, AquaBounty, says that escapes are impossible during transportation. There are concerns associated with genetically-engineered salmon escaping into the wild. Chances are slim that the genetically-engineered fish that are made sterile could breed in the wild, particularly in the warm Caribbean waters.

This can be devastating for wild salmon populations and ocean ecosystems as whole.