Food is an important part of culture, and religion too has not been able to escape from its richness. This has resulted in special foods for gods, rituals and ceremonies. These diets often depend on what grows in the area and what is available at home. Foods for religious ceremonies too have been adapted to the local environment. When one studies the foods that are linked to religion, one thing becomes clear: gods eat what is available 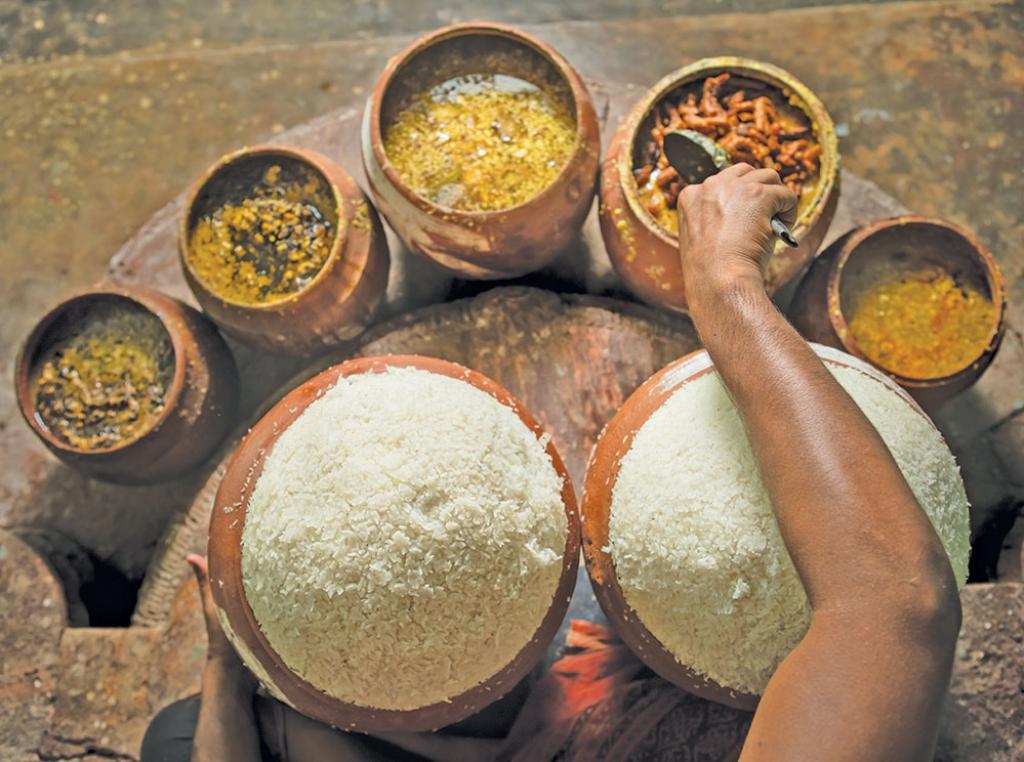 GODS TOO eat! And like us, their foods reflect their ecological niche. The connect between food and faith overflows with diversity—it is not just offerings to gods, but foods that are part of rituals and ceremonies and the folklore associated with the foods. For instance, chhappan bhog or 56 dishes prepared in the temples of Odisha, where tomatoes, potatoes or chillies are not used as these have come from foreign lands. Garlic and onion too are considered non-vegetarian and are excluded; Zoroastrians who prepare food for the souls of the departed, which is reminiscent of Iranian cuisine; Buddhist monks who consume meat due to scarcity of food; and, the Karbi tribe, where rice beer is an integral part of rituals. Non-vegetarian food too is part of rituals and religious ceremonies. 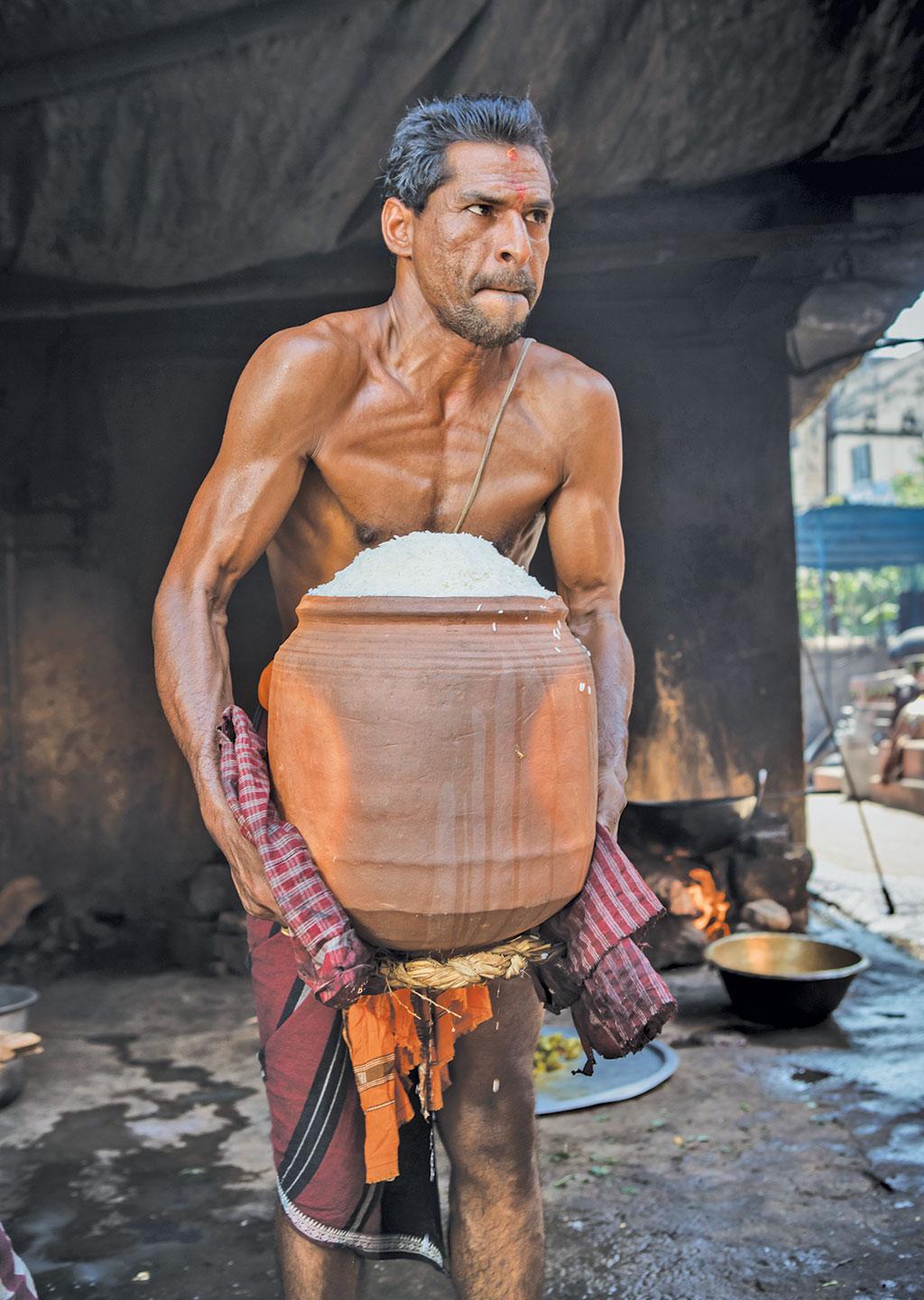 It may seem inappropriate to crack jokes about food, especially one that is linked to religion. However, Varud Gupta, a confused atheist, and Devang Singh, a procrastinating agnostic, have put together a tongue-in-cheek narrative about foods that are linked to religion in their book Bhagwan ke Pakwan. Some of these delicacies are offered to gods as bhog (offering), while others are part of the rituals. The authors say they have looked at “how faith can inform the food of a community and surprisingly enough, how food can in turn influence faith”.

While food for gods may have been a strange subject for the duo, we all know that the food we eat is entwined with religion. For example, during periods of fasting—when consumption of grain is prohibited—we have alternatives like amaranth, makhana and kuttu readily available to fill our stomachs. But the authors have under-taken a fascinating journey across the country and provide a glimpse of the various foods and the little known culture of the people who consume it. 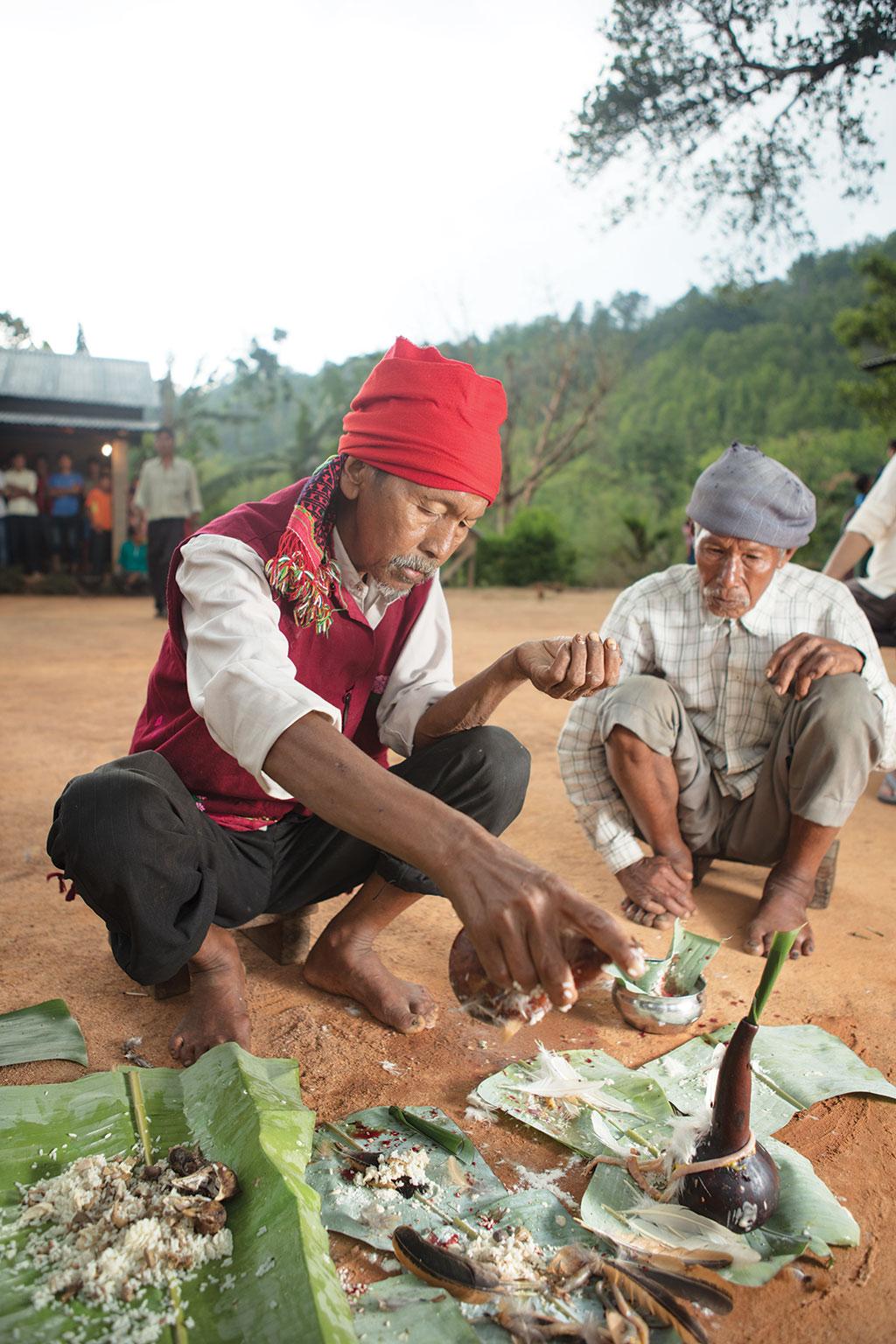 The authors’ narrative shows that in Rongmesek, Meghalaya, the religious rituals of the Karbi tribe seem to revolve around rice beer. There is also a description of a chicken that was sacrificed before them (as they consumed the rice beer) to get the blessing of the deities and to ensure a successful beginning to the sowing cycle.

They pull out the entrails of the chicken to mysteriously predict the yield. This chicken was then cooked and offered to the deities. The rice beer is part of the ceremony and is sprinkled on the deities. In any case, the purpose of the rice beer is only to make people lively, and not drunk, and we can trust the authors to have reported the event correctly. 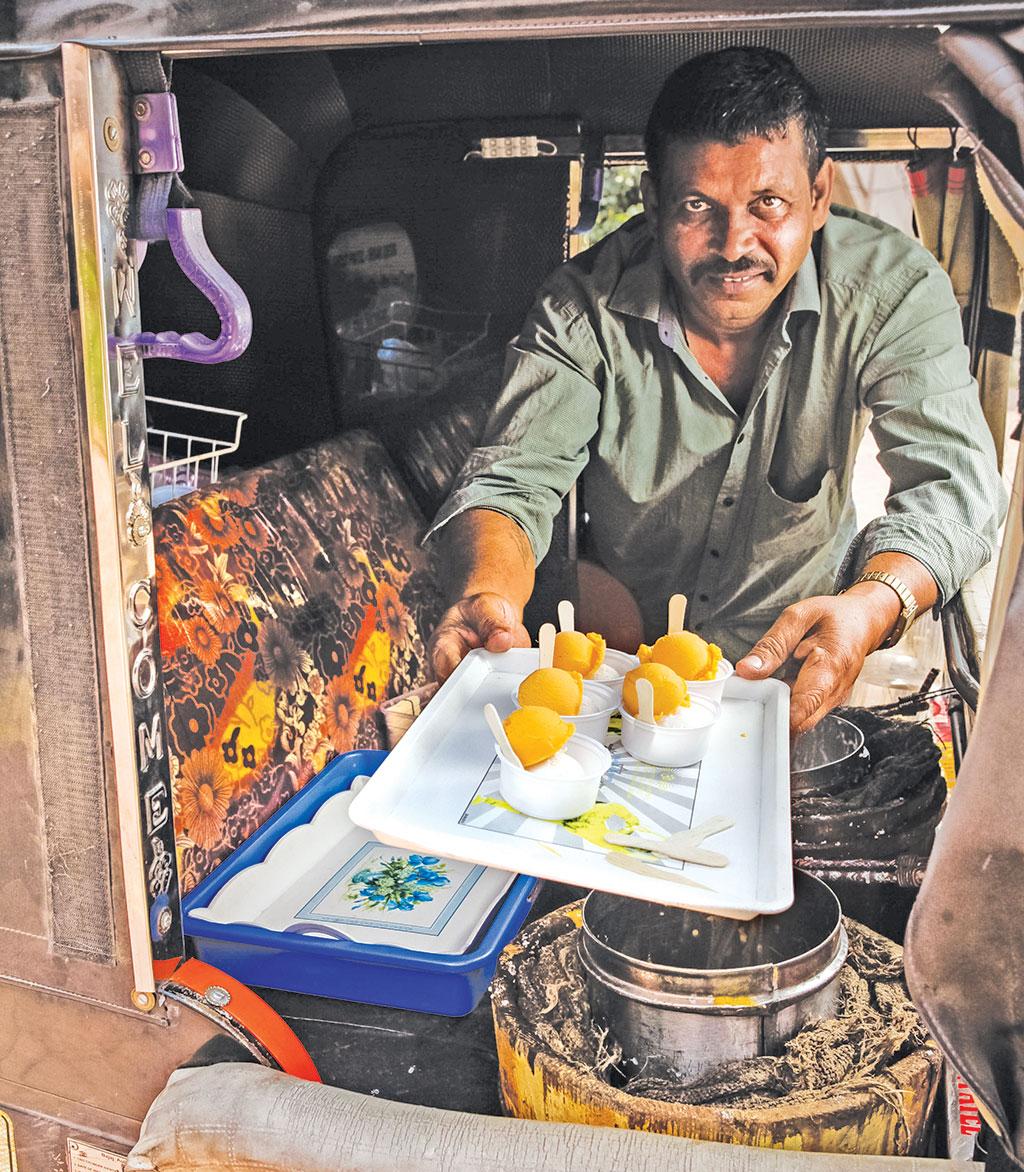 While Gujarat boasts of Dwarka, one of the four go-to-spots for Hindus, the book does not delve into the food that is offered there. Instead, it talks about the Parsis in Udvada, Gujarat. The Parsis, who follow the Zoroastrian faith, pray to fire. Fire not only physically purifies food, releases nutrition and transfers energy, it also purifies the mind and spirit, according to the religion. The authors describe a local made ice cream made from custard apples and mangoes which seem to be a part of the Navjote ceremony. This is a Zoroastrian coming of age ceremony. 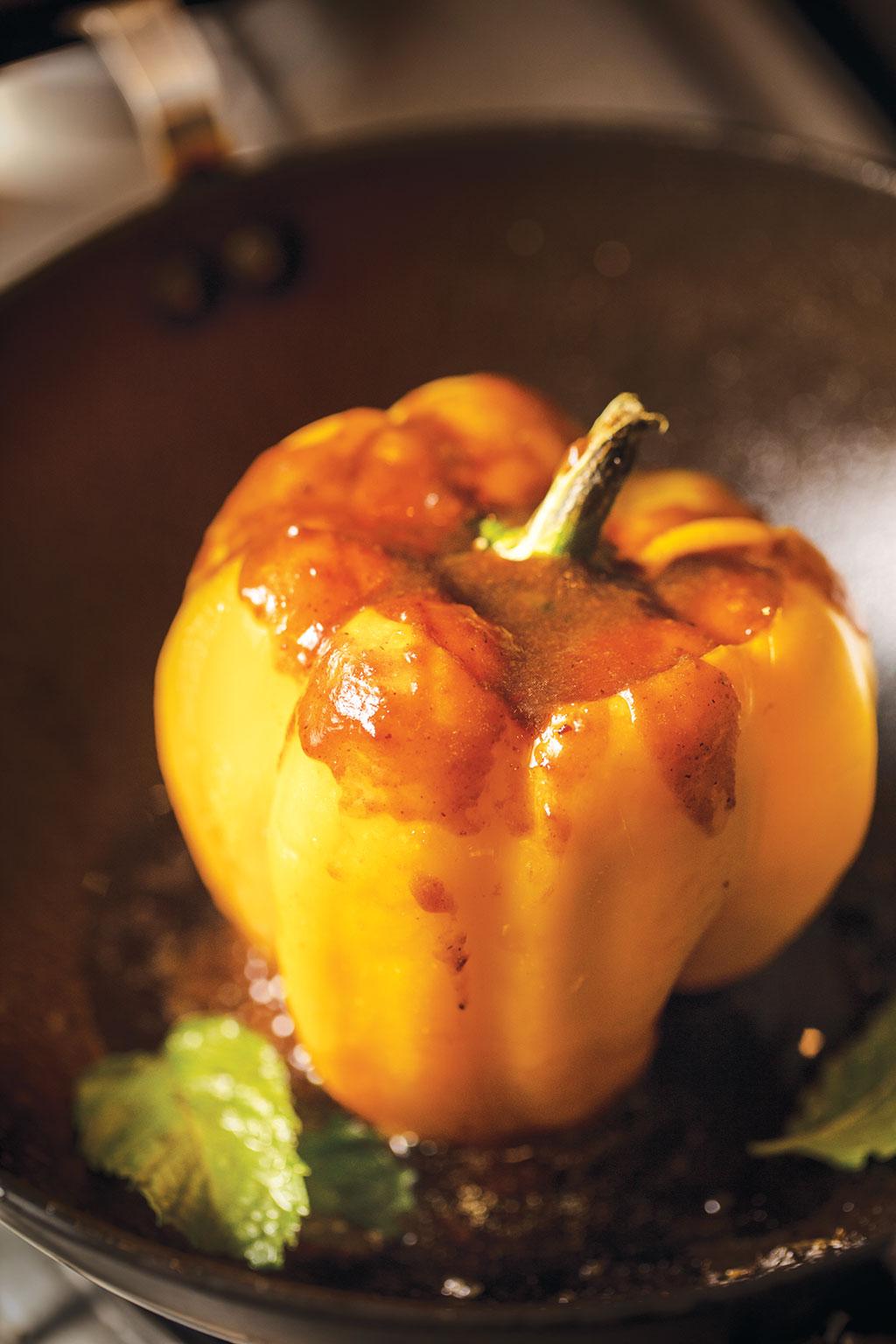 In West Bengal, they disregard the multitude of Bengalis and talk about the foods of the Jews. Only 20 Jews remain in the city. Their food is primarily fish, as it is considered kosher. The story of their food revolves around Shabbat—the day for rest and reflection. Shabbat falls on Saturdays and cooking is not allowed on this day. So Friday is the day to feast.

The chappan bhog or mahaprasd of the Shree Jagannath Temple, Puri, is described in detail. The cooking process is elaborate; it involves 752 stoves that burn through the day. About 1,000 cooks toil daily to prepare the bhog which has pepper, ghee and jaggery. The kitchen serves 10,000 plus people daily. The mahaprasad is shared with everyone regardless of caste, race or wealth. 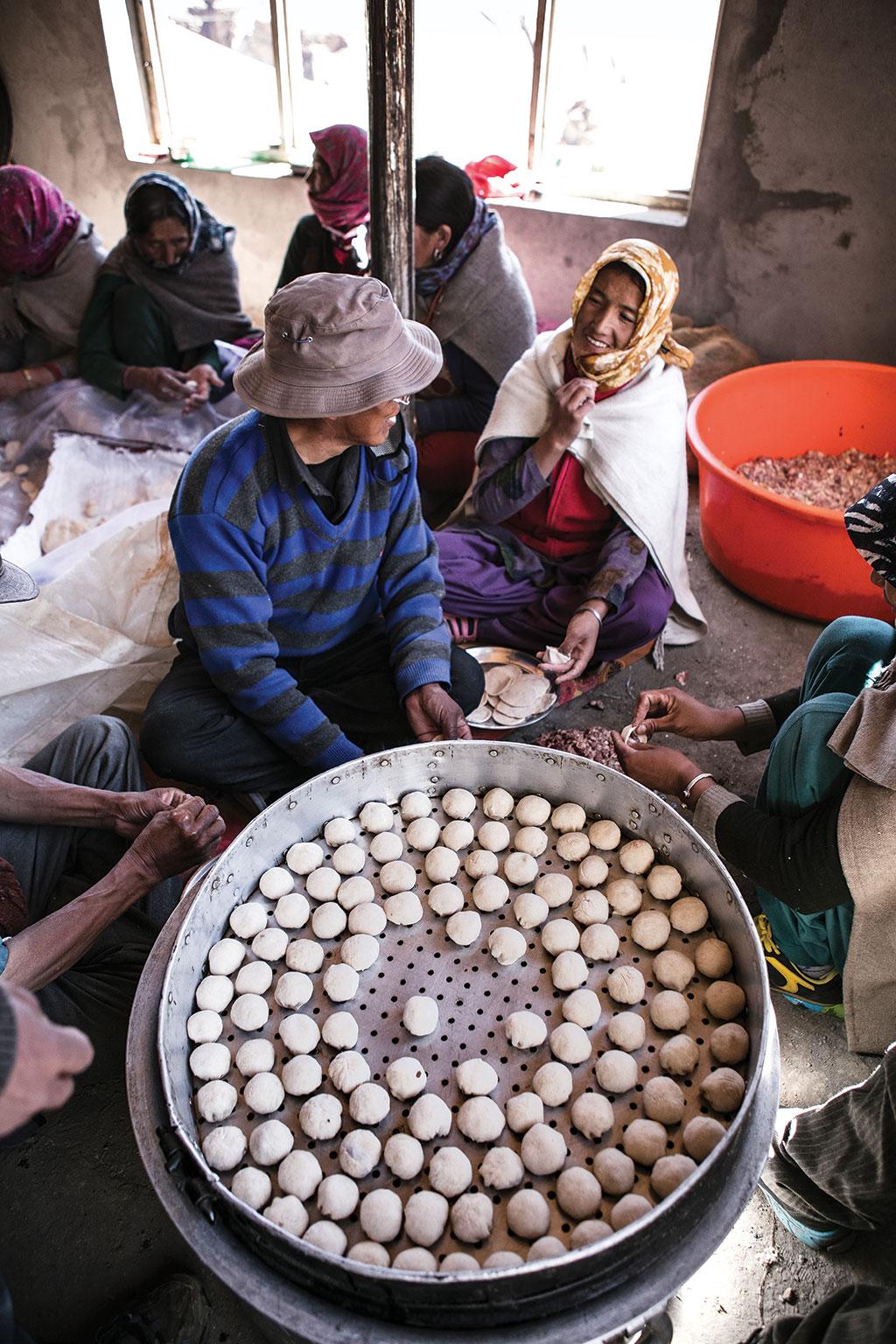 In Spiti, Himachal Pradesh, the Buddhists at the Kye Gompa Tibetan monastery thrive on gur gur cha, or butter tea and puk, which is sattu mixed with tea. While non-vegetarian food was allowed in the monastery till two years ago, it was discontinued to promote “healthy food”.

The monks are free to consume meat outside the premises of the monastery and can partake the mutton momos in the nearby Chichum village. Meat consumption does not seem to be taboo for Buddhists who practice non-violence, but in the cold desert climate of Himachal, there are few resources and people have to look for nutrition wherever they can. The meat provides the much-needed protein to help them survive winter.