Green is the new orange: Why carrot leaves shouldn’t be thrown away

There is more to carrots than their colourful roots 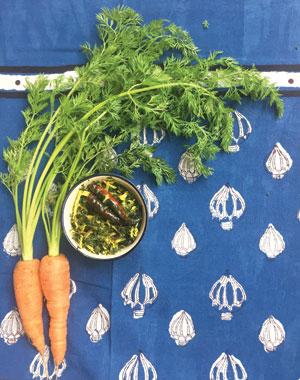 The call to reduce food waste has grown louder in the time of climate change. One of the obvious yet overlooked examples of wasted food potential is the carrot (Daucus carota).

When we think about carrots, we only remember the colourful roots of its various varieties. The red ones are grated and cooked in milk to prepare a halwa or gajrela, while purple carrots are used to make a tangy fermented drink called kanji in Uttar Pradesh.

But roots do not capture the full magic of the carrot. The lacy green leaves make up nearly half of the weight of the vegetable but rarely reach the markets or our plates.

They are often discarded after harvest to improve the shelf life of the roots, and merely used as animal and poultry feed. But they have potential to increase food diversity for human beings, not to mention their huge nutritional value.

Carrot leaves, just like the roots, are rich in vitamin A. Carbohydrates and protein account for 60 per cent and 20 per cent respectively of the leaves’ dry weight, as per a study published in the Journal of Food and Dairy Sciences in April 2011. The leaves have potassium that lowers blood pressure, supports metabolism and prevents osteoporosis.

They also contain calcium, phosphorus, iron and zinc. Given that they are rich in natural antioxidants, carrot-green extracts are often added to commercial food products. No wonder health food enthusiasts and foragers use them in herbal teas, soups and salads.

Carrot seeds too have medicinal value: they contain estrogen and were used in some cultures as an effective method of contraception. Lebanese folklore mentions the use of carrot seed oil from wild plants in cancer treatment — modern research proves this. The oil also has anti-ageing properties and features in skin-care products.

Scientists believe carrots were domesticated 1,000 years ago. Russian botanist Nikolai Vavilov, who traced carrots’ origin to be near Afghanistan in Central Asia, postulated sometime in the 1920s that the domesticated variety of the vegetable can be divided into Eastern and Western groups (depending on the side of Afghanistan they grew).

Perhaps this familiarity of taste is why, despite not being commonly sold in markets, the leaves are used as a common green in several cuisines. In Japan, for instance, the leaves are stir-fried with soya sauce. In several European countries, they are part of salads and soups.

Even in India, they are used in traditional recipes like the kadhi of Rajasthan, which is made with chickpea or pearl millet flour. In Tamil Nadu, carrot greens are stir-fried to make poriyal (see recipes). Staple dishes like paranthas or dal can also get a nutritious kick with carrot leaves.

Carrot leaves should be eaten in moderation, as they contain alkaloids, just like other green leafy vegetables. Alkaloids are a part of the plant’s defence mechanism against insects and microbial attacks, but they taste bitter. Consuming too much might trigger an allergic reaction, nausea or food poisoning. It might be judicious not to eat them too often in a season.

We should also ensure that the plants used are grown organically as farmers tend to use pesticides and fertilisers in heavy doses to make the roots plumper. But in the quest for better carrot roots, we cannot sacrifice the equally crucial leaves.

Cut the leaves finely. Place a wok on flame and heat water enough to boil the leaves. Cook till the leaves are soft and not much water remains. Take buttermilk, pearl millet, chilli powder, turmeric and salt in a bowl and mix well. Add this mix to the boiled leaves slowly while mixing continuously. In a pan, heat the oil and fry the cumin seeds and chopped garlic. Add to the kadhi and boil cook for another 10 minutes. Serve with bajra rotis.