Grounded in wisdom: The forgotten chakki should regain its place

Traditional mini flour mills may no longer be in vogue in our homes, but they help prepare nutritious food 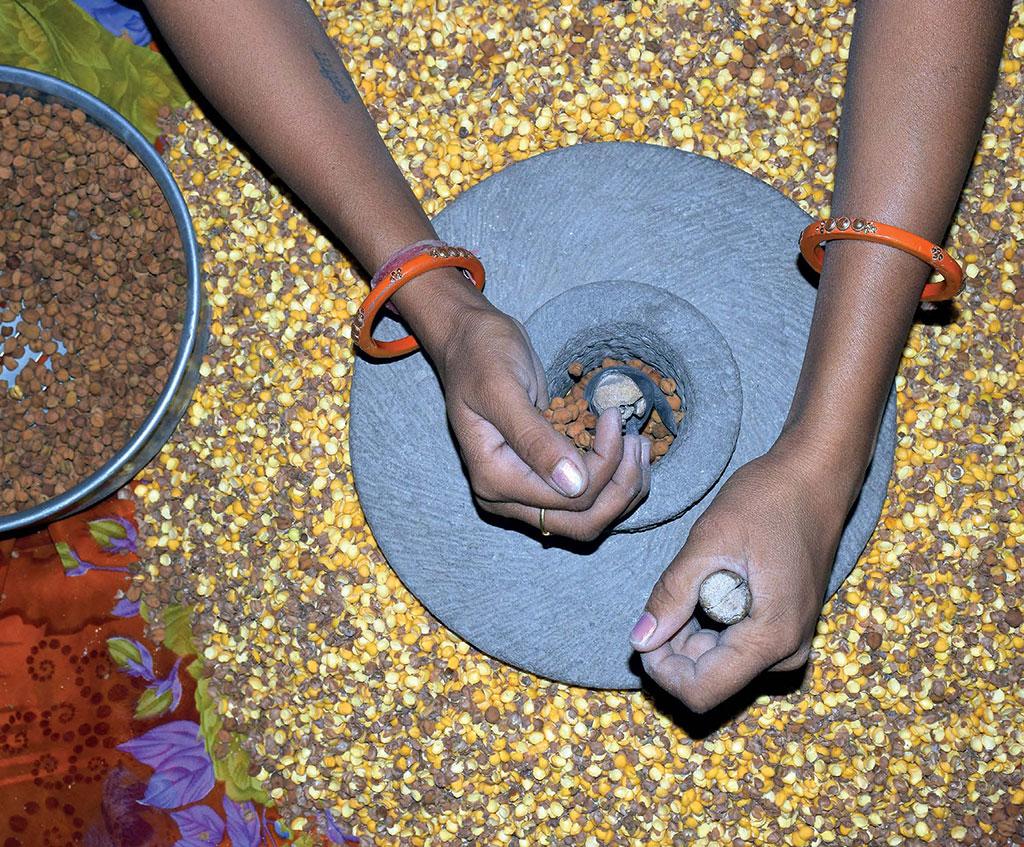 Working the chakki improves spine health, helps reduce fat and is a good alternative to going to the gym

This is a story from the times when almost every house in several parts of India had an atta chakki, or a flour mill. Grains like wheat, maize and pearl millet would be ground fresh each day and all women in the family would take part in this daily ritual to ensure that healthy rotis could be served to everyone.

While there are various types of traditional mills in different parts of the country, the chakki in my maternal grandmother’s house in a village near Aligarh, Uttar Pradesh, was made up of two flat, round grinding stones placed one on top of the other. This was fixed on a slightly raised platform in an airy but windowless room at the back of the house.

The top stone had a rectangular piece of wood (galua) fixed at the centre in which a metal rod (attached to the stone at the bottom) was adjusted to provide the pivot for stones to move over each other. Grains would be poured from the top and a fancy wood-carved handle — placed on the top — was used to turn the top stone clockwise to make flour.

The bigger the stone, the faster would be the process and finer the flour. But the fact that it has to be turned by hand is a limiting factor. Usually the diametre of the stone is less than the length of a person’s arm. Two persons can sit facing each other and move the chakki handle together to ease the work. The processed atta falls off the lower stone into the bhir — a circular receptacle below the chakki, which is made of mud and coated with multani mitti (Fuller’s earth).

The flour prepared through this method is healthier, unlike machine ground flour and it does not heat up during the grinding process. The texture of the flour can also be adjusted to personal preferences. This choice is a big plus in this world of ultra-processed food.

My grandmother also had a smaller version of the chakki, which could be moved around the house. It’s called chakula and used to prepare daliya from a variety of grains and for splitting whole pulse to dal. The smaller diametre of the stones ensured the grain was only broken, not turned to flour. It was religiously washed before the fasting season to grind kuttu (buckwheat) and sendha namak (Himalayan pink salt).

These semi-processed products are part of Uttar Pradesh’s cuisine. While wheat daliya is quite common, daliya can also be prepared from makki (maize), bajra (pearl millet) and jowar (sorghum).

Daliya is healthy and often the go-to food when people want to eat something light yet filling. It is faster to cook than whole grain and is digested more slowly than products made from flour. It is also versatile — you can prepare its sweet or savoury versions.

Daliya needs to be roasted first and then boiled to soften, but as the pieces are small, this does not take much time. To prepare the sweet version, milk and sugar are added; and to prepare the savoury, khichri, vegetables and spices of choice can be added. A dry version can also be prepared, just like poha. Hand-processed daliya is rarely available in the market now as consumers find grains cuts with blades more uniformly sized and attractive.

The chakula can be adjusted to process pulses so that each grain breaks into two pieces, but the manual process is crude and sometimes the seed shatters into many pieces, and sometimes, it passes through unharmed. It all depends on the expertise of the person who adjusts the chakula and it is not good to get too much of either.

The shattered pieces are called chuni and have pieces of the seed coats which add to the nutrition. Chuni is soaked in water and then wheat flour is added to make it into a dough from which nutritious rotis or crisp parathas can be prepared (see recipe). Just like split pulses, chuni can be stored to be used later.

The home-processed dals are unpolished and though unpolished dals are easily available in the market now at a premium price, these are processed by machines only.

Daliya and chuni provide healthy choices along with some wholesome exercise. Working the chakki is often prescribed to pregnant women to ease childbirth. Chakki chalanasana is part of yoga with improves spine health and reduces backache. It also helps reduce belly fat and is a good alternative to going to the gym.

Unfortunately, chakki has now become synonymous with serving a jail term as prisoners are mandated to make flour. But time has come to bring chakki back to its rightful place in homes. Nowadays, a much-carved version of the appliance is available as a decorative item in high-end markets of Delhi. People who install this at home would get both nutritious food as well as exercise.