How 'Bhut Jolokia' lost its heat

One of the hottest chillies, it went through a dip in its intense spiciness and price when its production spread and cross-pollination began on a large scale 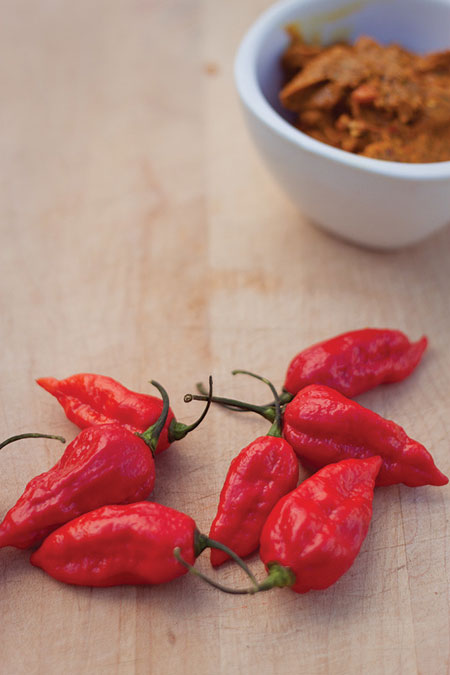 CALL IT bhut jolokia, raja mirchi or king chilli, just one bite of this excruciatingly hot chilli can turn anyone into its colour — red. It, therefore, came as no surprise when in 2007 the Guinness World Records recognised it as the hottest chilli. It, howoever, lost the status in 2011.

Bhut jolokia is delicate and must be harvested at the first sign of ripening. The chilli has a crop cycle of six months, in which it fruits for about three months. Bipul Gogoi, a grower in Sibsagar district of Assam, says, 1,500 to 1,600 seedlings can be planted per bigha (around 0.13 hectare). One plant yields an average three kg in every crop cycle, which Gogoi estimates fetches a profit of Rs 15,000 to Rs 20,000 per bigha.

Buyers assess the chilli by its spiciness and colour. Fresh chillis can be bought in wholesale markets such as Machkhowa in Guwahati. Hiren Baruah, wholesale dealer here, says his average sale every day is between 50 kg and 100 kg. In season — between March and July — prices range from Rs 150 to Rs 300 per kg. A bulk of the chillis bought here are traditionally dried under the sun, or in machines before being sold again or turned into paste.

Bhupen Barman, a vegetable vendor in a local market in Guwahati’s Ganeshguri locality, buys bhut jolokia at Rs 600 a kg and sells it at Rs 800 a kg in off season. Rasween Das, who runs Giskaa, an online portal dealing with ethnic products from the northeast, says it is a niche market. Giskaa sells products such as pickles and pastes made from bhut jolokia. A 50 g pack of its flakes sells for Rs 294, while pickle is priced at Rs 290 per 150 g (see recipe).

Babadhan Chutia from Tinsukia district owns GreenF Hygiene Food Private Limited, a start-up founded in 2015-16. He buys 25 tonnes of fresh bhut jolokia every year to make pickles. Chutia says it has an enormous domestic market as Indians love the chilli’s flavour. He sells products across the northeast and plans to reach markets across the country by 2020. Chutia buys fresh chillies from about 40 farmers in Panitola, Kakopathar and other areas adjoining Tinsukia at Rs 150 per kg; this price can rise to Rs 400 per kg in off-season. His average annual profit was Rs 8 lakh in 2017-18. He sells the finished product at Rs 350 for every 200 g.

SOME SELLERS, HOWEVER, are not convinced with the chilli’s profit potential. M Krishna Saikia, CEO of Greencover Overseas, a major spice export agency in Guwahati, says his company has almost stopped dealing in bhut jolokia. Between 2007 and 2011, Saikia was selling the chillis for over Rs 2,000 per kg and could not keep up with the demand. But a drastic dip in demand followed, because of the fall in the chilli’s heat quotient from 1-0.8 million Scoville Heat Units (SHUS) to just around 0.3 million SHUS. Chiranjeet Baruah, proprietor of Croma Hydroponic Nurseries in Dibrugarh explains: “As the demand went up, farmers started cultivating it in large quantities. This increased cross-pollination, bringing down its heat.”

Usually, the plant yields a crop for four to five years, but its size and intensity wanes with time. Baruah advises that farmers should use a plant producing chillis of the hottest quality from areas such as Golaghat district in Assam which traditionally cultivated bhut jolokia. “Cloning from this plant will give us our mother plant. Tissue culture from the mother plant will give us over 1,000 plants. Direct germination from seeds lowers its quality and heat intensity,” he says. Serious farmers, therefore, prefer to plant a fresh crop every year.

Leena Saikia, a bhut jolokia grower, is known across Assam to be the first to cultivate it professionally. She founded Frontal Agritech Private Limited in Jorhat along with her husband. Production began in 2004, at a time when there was no market for the crop; in fact, the company was the first to introduce it to the international market. Now, the company exports its produce to 22 countries, and was selected by the Spices Board as the top exporter of spices from the northeast for 2015-16 and 2016-17. In India, Spices Board gives certification for the goodness of spices. Its export price depends on this certificate. With the increase in demand, production began in different parts of India as well as in countries such as Mexico.

Now, the current export price is an average Rs 1,800 per kg. Frontal Agritech exports 20 to 25 tonnes per annum of oven-dried or smoke-dried bhut jolokia. Its biggest buyer is the US.

While almost 90 per cent of the current production is being used for edible purposes, Saikia says it is also used in products such as pepper sprays and tear gases.

Because of bhut jolokia’s spiciness, Defence Research and Development Organisation (DRDO) studied its properties and in 2009, announced to use it in hand grenades as a non-lethal weapon. During research, DRDO cultivated it under controlled conditions—the result was a crop of the hottest chillis, thus showing the way for bhut jolokia to attain its lost status back.