How your Christmas turkey arrives already stuffed – with antibiotics 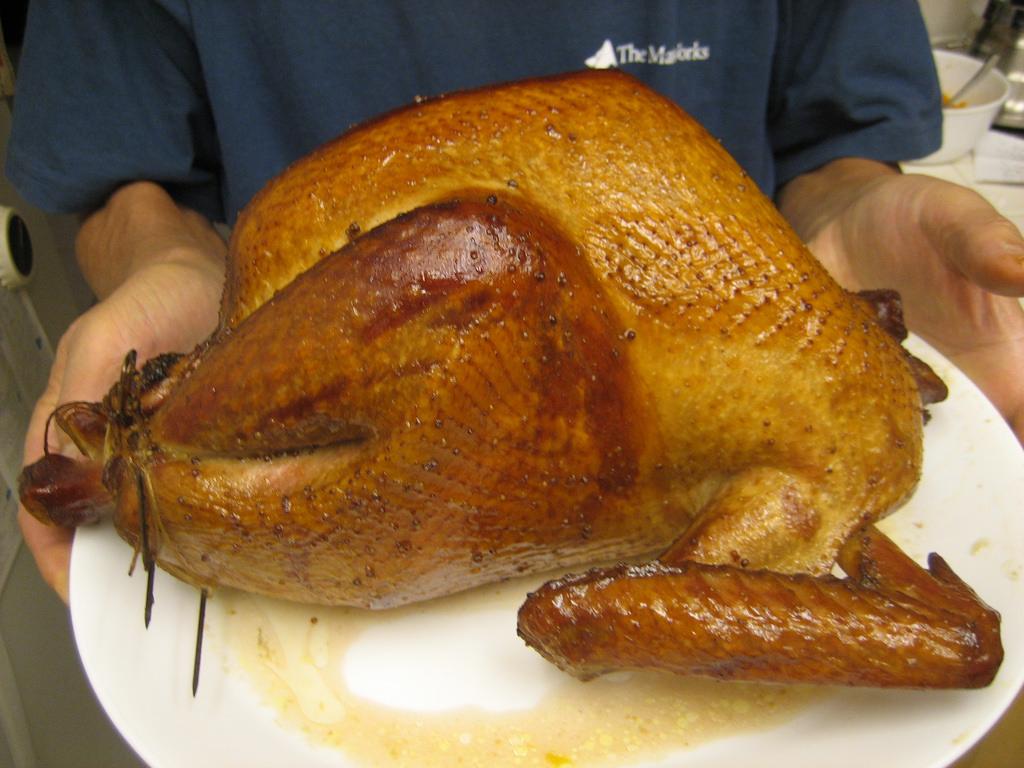 The average turkey now weighs in at more than 10 kg, a much bigger animal than its wild ancestor. Credit: Eugene Kim / Flicker

You may consider the turkey to be a traditional part of your Christmas celebrations. But however you cook it, something about this festive bird is changing – it’s getting fatter.

The average turkey now weighs in at more than 10kg, a much bigger animal than its wild ancestor. And, while this has partly been achieved by more sophisticated genetics and husbandry, the use of antibiotics has also played a key role. Stopping the spread of disease in animal production is an important way of delivering welfare – and a healthy turkey gains weight more quickly.

The trouble is that antibiotics are often the first line of attack in both preventing and treating animal diseases. And just as it does in humans, over use of antibiotics has resulted in the emergence of more antimicrobial resistance in the organisms which cause bacterial and fungal diseases.

Many of the antibiotics used in farming are also used in treating human diseases – and the transfer of resistant bacteria through our food supply chain does occur. Staphylococcus aureus and E. coli, are organisms which can be harmless in both animal and human environments – but it is their antibiotic resistant variants that are of major concern to us. Staphylococcus aureus can cause blood poisoning and its methicillin-resistant form (MRSA) is known as the “superbug”. Antibiotic resistant forms of E.coli such as E.coli o157 cause severe sickness.

Antimicrobial resistance in livestock farming will reduce the impact of the suite of pharmaceuticals we rely on for fighting human diseases. It is a threat which has been highlighted by revelations that MRSA variants have been found in pork sold in UK supermarkets.

We urgently need a greater awareness of the risks associated with administering antimicrobial treatments on livestock farms and a better understanding of what products are being used. For while the antibiotic-resistant superbugs plaguing hospital wards have been well documented in the media, the similar epidemic in livestock farming has been much less well publicised.

How we choose to source meat is an important factor dealing with this risk – and it is not just turkey production that has changed significantly in recent years. Pigs represent the greatest amount of livestock produced globally – China produces 54m tonnes of pork each year. This is 17% of global meat production and represents a huge pressure point for the use of antimicrobial treatments.

In November 2015, Chinese scientists declared they were on the cusp of the “post-antibiotic era” after bacteria resistant to the antibiotic used when all others have failed, colistin, were found on livestock farms. This caused the global community to sit up and take note – before everyone went back to business as usual, with demand and production of meat continuing to rise.

The problem is that we do not know how often – or how many – antimicrobial treatments are used in global farming. There are big gaps in our data and understanding. What we do know is that a considerable amount of antibiotic material is used in rearing healthy animals to be free of infection. An independent study reported the amount of antimicrobials used in food production in the UK is at least the same as that in humans. The requirement for antibiotics is not in doubt here – and, when they are properly used for treating infections, the outcomes are positive. But other countries have shown that the need for using antimicrobials can be reduced by detecting diseases more effectively and by considering different management practices.

In the Netherlands and Denmark changes have been introduced since 1995 which focus on producers working with public health agencies. This stronger relationship identified where greater surveillance and the application of resistance detection would be most likely to succeed. This has led to 50% reductions in antimicrobial use in pork meat and ten-fold reductions in their use in poultry production. Improvements in animal housing, disease detection and resistance detection that have been initiated by these programmes have also enhanced trust across the food supply chain.

The role of livestock farming in tackling antimicrobial resistance must be linked to animal welfare. If production practices can reduce the misuse of antimicrobial treatments, then strong government policy must help to make this happen. This year the UK government halted plans to devolve responsibility for the codes of practice in livestock farming because of this type of issue. At a time when a coordinated approach to tackling antimicrobial resistance is most needed, it is critical for farmers and policymakers to work together and fully understand the issues at stake.

Animal welfare is important – and antibiotics help to provide it. But it would be catastrophic if they were to lose their effectiveness through overuse. Then the post-antibiotic era really would have arrived – when minor infections become lethal.