Sohphie, a sweet-and-sour fruit, marks the arrival of spring in Meghalaya. It is relished raw as well as in pickles 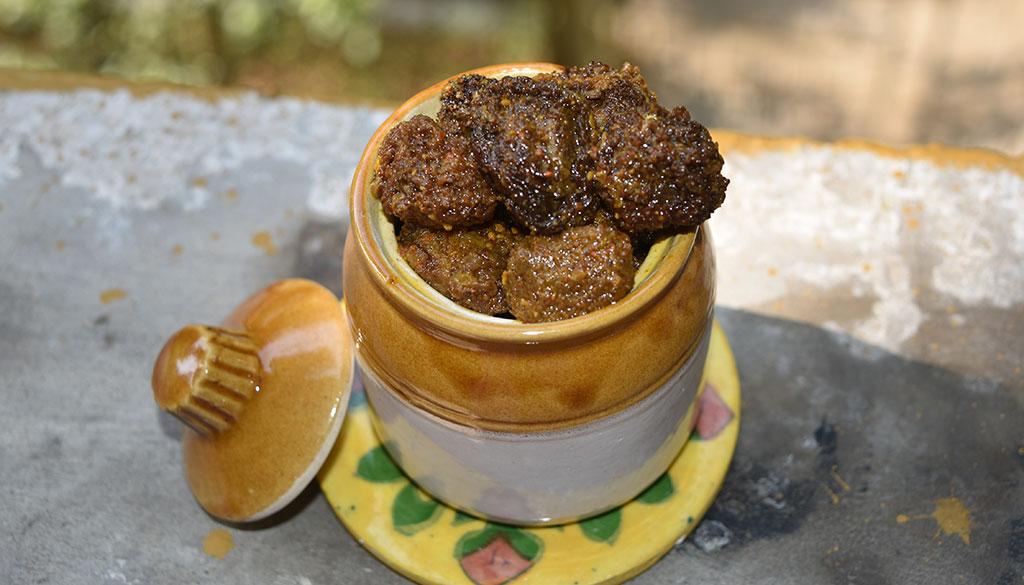 As sohphie perishes within two to three days, many people make pickles, jams and jellies out of the fruit (Photographs: Shalini Dhyani)

Summer was at its peak across the country when I was travelling through Meghalaya on a research project. Fatigue remained at bay in this abode of clouds, as the name of the state literally means. At one point, the weather and the vegetation suddenly started changing and we were greeted by an overcast sky and a short drizzle. The driver declared that we were at Duwan Sing Syiem, a tiny hamlet that marks the entrance to Cherrapunjee, still famous for being the wettest place on Earth.

The town, locally referred to as Sohra, sits on a plateau that rises more than 600 metres above the surrounding valleys. Its gorges remain covered with lush green forests and waterfalls. While admiring the picturesque view, my sight fell on baskets neatly arranged with tennis-ball-sized fruits. They were of different hues, from greenish-red to dark red and even purple. The women selling the fruit referred to them as sohphie.

I bent down to take a closer look at the fruit when Bansara Khunkynthei, one of the sellers, warned me that the greenish-red ones taste sour. “Choose the ripe ones, which are dark red or purple,” she said. “These are sweet. If you still want to taste the green ones, temper them with salt and red chilli powder first.”

Trune Ngakhai Pao, a researcher from the North-Eastern Hill University, Shillong, explained the multiple emotions the juicy tangy fruit evokes the moment one bites into it: “The eyes squeeze, the tongue goes numb and the teeth start chattering.”

I later came to know that sohphie, which belongs to the Myricaceae family, grows throughout the Indian Himalayan region at an altitude of 1,300-2,000 metres. Its variants are called keifang in Mizo, nagatenga in Assamese and kaphal in Hindi.

Sohphie, known as Myrica esculenta in scientific lexicon, is common in Dikhow Valley of Assam and Khasi and Jaintia hills in Meghalaya. Though also found in Uttarakhand, the fruit is much smaller here and has a different taste altogether.

In Meghalaya, sohphie marks the arrival of spring. Till the end of summer, it is enjoyed by tourists and locals for its crunchiness and juiciness. But the fruit perishes fast and must be consumed within two to three days.

So people store it as pickles, jams and jellies. On my way to Shillong and then to Guwahati, I observed many shops selling sohphie pickles, along with the usual ones made from bamboo shoots and bhut jolokia, the world’s hottest chilli pepper.

Apart from its great taste, the fruit is rich in medicinal values. “Locals use the refreshing fruit juice to cure stomach problems like dysentery,” says Baishali Thapa, a woman in her mid-40s. It contains phytochemicals, which fight pathogens.

It is also rich in anti-allergic, anti-diabetic, anti-oxidant and anti-inflammatory properties, says a 2018 research paper by P Sood and R Shri, A Review on Ethnomedicinal, Phytochemical and Pharmacological Aspects of Myrica esculenta, published in the Indian Journal of Pharmaceutical Sciences. The study also says that the bark of the tree is used to cure asthma, fever, chronic bronchitis, lung infections and toothache while the leaf, root and bark are used to treat worms and jaundice. Sohphie offers alternative livelihood opportunities to the rural poor due to its many uses. Even though economically important and sold across Meghalaya in May and June for Rs 10-20 per 100 grams, its trade remains unorganised.

At present, it is sent to the other northeastern states in small quantities because supplies are irregular and mostly depend on village women, who traverse through the hilly terrain to pluck the fruit, says Thial Papiah, a resident of Khlerihat in the East Jaintia Hills.

Due to less time on hands and to simplify their work, collectors often lop off entire branches instead of hand-picking the fruit. To counter this trend, Papiah feels there is an urgent need to follow only partial lopping. But people here own the trees, and they often cut entire branches for firewood.

A 2011 study published by the university points out that this kind of unsustainable harvesting threatens the regeneration of sohphie trees and leads to their gradual extinction from natural forests.

“To prevent this, there is a need to expand the market of the non-timber forest produce. Another option is horticulture, which not only reduces the pressure on natural forests, but also enhances the yield to provide better economic returns to locals,” explains Pao.

Besides unsustainable harvesting, rat hole mining under which forest patches are cleared is also responsible for the fewer number of sohphie trees. Temperature rise and less rainfall as a result of climate change are also leading to the degradation of forest-rich biodiverse areas. In this way, forest diversity of the state is diminishing and the presence of wild edibles is at threat.

(The author is a scientist with CSIR-National Environmental Engineering Research Institute, Nagpur. Views expressed are personal)

This package was first published in Down to Earth's print edition (dated 1-15 July, 2019)