The material was tested on potato, tomato, green chili, strawberry, Khasi Mandarin, apple, pineapple and kiwifruit and was found to keep these vegetables fresh for nearly two months 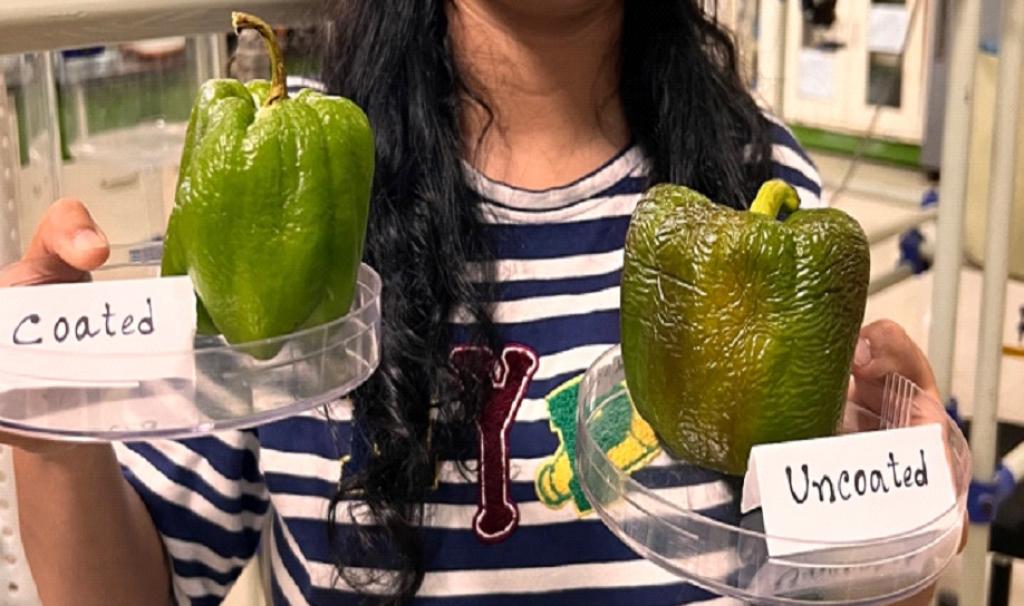 A team of researchers at the Indian Institute of Technology (IIT) — Guwahati has developed an edible material that, coated on vegetables and fruits, substantially extended their shelf-life.

The material was tested on potato, tomato, green chili, strawberry, Khasi Mandarin, apple, pineapple and kiwifruit and was found to keep these vegetables fresh for nearly two months.

The team used a mix of an extract of a marine microalga called Dunaliella tertiolecta and polysaccharides to produce it. The microalga is known for its antioxidant properties and has various bioactive compounds such as carotenoids and proteins.

It is also used to produce algal oil, a non-animal source of omega-3 fatty acid and is considered a good source of biofuel. After the oil is extracted, the residue is usually discarded.

The researchers used extracts from this residue in formulating their film, in combination with chitosan, which is a carbohydrate. It also has antimicrobial and antifungal properties and can be made into an edible film.

The researchers said, “The films were made with varying algal extract contents and their properties were analysed and compared with controls. They displayed superior antioxidant activity, thermal stability, mechanical strength, total phenolic content and water vapour barrier property. They also had excellent UV-Vis light-blocking properties”.

The researchers also tested the biosafety of these coatings. They tried them on what is called the BHK21 cell line. It is a laboratory standard for the study of various biological processes. The tests showed that the new coating materials were nontoxic and could be safely used as edible food packaging materials.

The research team consisted of Vimal Katiyar and Vaibhav V Goud of the Department of Chemical Engineering and the Center for Excellence in Sustainable Polymers (CoE-SusPol) at the Institute along with their research scholars Kona Mondal, Tabli Ghosh, Mandavi Goswami, Shikha Sharma and Sonu Kumar.

The study results have been published in several scientific journals, including the Royal Society of Chemistry Advances and the American Chemical Society’s Food Science and Technology.

Highlighting the importance of their work, Vimal Katiyar, who led the team, noted, “According to the Indian Council of Agricultural Research, between 4.6 and 15.9 per cent of fruits and vegetables go waste post-harvest, partly due to poor storage conditions. In fact, post-harvest loss in certain produce items like potato, onion, and tomato could even be as high as 19%, which results in high prices for this highly consumed commodity.”

The new coatings, he said, can be mass-produced. They are very stable to light, heat, and temperature up to 40oC, edible, and can be safely eaten as part of the product formulation and do not add unfavorable properties to it. They retain texture, colour, appearance, flavour and nutritional value.

The material can be either directly coated on the vegetables and fruits or made into a vegetable storage pouch. In both cases, the shelf-life of the vegetables can be extended. It is a simple dip coating technique with no significant cost added to the post-harvest processing, he added. (India Science Wire)