Burden of malnutrition unacceptably high despite world being better equipped to fight it. Credit: Getty Images

India’s standing vis-a-vis United Nations-mandated goals has improved marginally, but the country has slipped in key areas, related to food security, livelihood and standard of living.

The country’s overall score of 60, according to the Sustainable Development Goals Index 2019-20 released by NITI Aayog, was three points above its 2018 standing. This was primarily due to better performance related to water and sanitation; affordable and clean energy as well as industry, innovation and infrastructure.

But the country was worse off in several goals (SDGs):

India’s worst performance was towards SDG 2: Ending hunger by 2030, where its score has fallen to 38 in the current year from 48 in the previous year.

This was also highlighted by Global Hunger Index 2019 released in October 2019, which places India 102nd among 117 qualifying countries.

As many as 25 states and Union territories failed to address “hunger and malnutrition”, according to the NITI Ayog index. Jharkhand led from the bottom, scoring 22 off 100, followed by Madhya Pradesh (24) and Bihar (26). 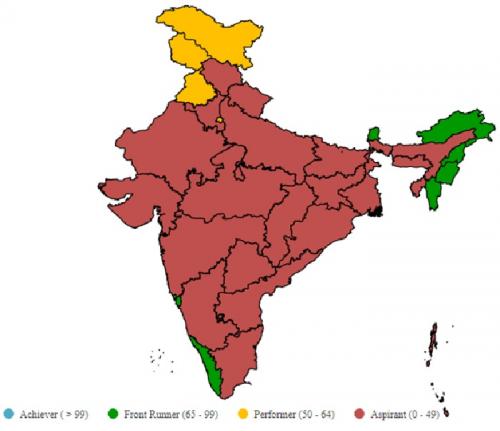 Gujarat, Maharashtra, Chhattisgarh, Odisha, Rajasthan, Meghalaya and Uttar Pradesh were among the states that lagged.

Those apart, there were four existing indicators:

The index recognised climate change as a challenge to ensuring food security in India as it turned food production highly vulnerable.

It stressed on climate-smart sustainable agriculture and called for widening climate-adaptive farming practices, new technology and plans that involve land owned by small farmers, who constitute more than 82 per cent of India’s farmers.

India slipped four points to 50 vis-a-vis ending poverty, with 22 states unable to reduce poverty. The situation was dismal for gender parity too.

Goa ranked last there, with its score plummeting 31 points to 19.

The index, in its second year, ranked the states and UTs based on 100 indicators for 54 targets across 16 goals.