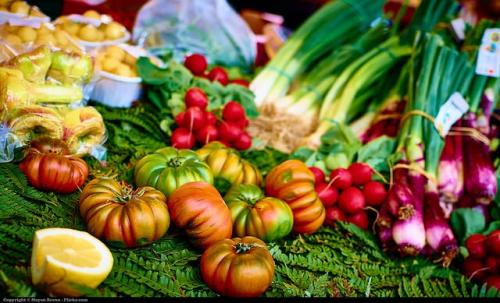 A global report draws attention to the fact that humans increasingly need to shift towards diet patterns that are healthy, and at the same time, respect environmental limits.

The report, Plates, pyramids, planet, says that dietary habits having low environmental impacts can ensure good health and that diversity is the key to such healthy diets.

Tara Garnett of the Food Climate Research Network, University of Oxford, told Down to Earth that the report outlined the patterns that could be considered to offer win-wins (diets low in environmental impacts but promising good health). Garnett is also the report’s co-author.

The present food production system is destroying the environment. It contributes to 20–30 per cent of greenhouse gas emissions, promotes deforestation, gives rise to land use changes, leads to biodiversity loss, accounts for 70 per cent of all human water use and is a major source of water pollution, the report says.

The main objective of agriculture is to produce enough food to feed our growing population. But though enough food is produced for over 7 billion people, not all get adequate and affordable nutrition.

“Win-win situations arise when eating for health and for the environment coincide to achieve better results. …focus (is) on building sustainable food systems to provide food that will improve the health of people (on) Earth and for future generations. Healthy diets have certain principles (diversity, adequate nutrition and balance) which can be applied anywhere in the world,” Ana Islas Ramos, nutrition officer at the Food and Agriculture Organization, said.

The report urges governments across the world to develop food-based dietary guidelines (FBDGs) for ensuring sustainability.

Food guidelines are a useful tool that can be implemented at all levels to move towards healthier and, if sustainability is considered, more sustainable diets.

Currently only 83 countries have FBDGs out of a possible total of 215. The absence of such guidelines is generally prevalent in low-income countries. The report says that only five countries in Africa have such guidelines. As far as sustainability is concerned, only four countries have included it in their FBDGs. These are Brazil, Sweden, Qatar and Germany.

Guidelines are definitely country-specific, Ramos added. “Each country designs its guidelines for their population …it is also their call as to whether or not to include environmental or other sustainability considerations,” she said.

When it comes to issuing food guidelines, developing and implementing such measures are not easy as the process needs political will and financial investment.

Fish is presented as the main area where health-environment trade-offs arise, but the advice is nevertheless given to continue to consume it in quantities consistent with health recommendations, the report says.

Greenhouse gas emissions, water use (especially use of irrigation water), land use, biodiversity and adaptation to climatic change should be kept in mind while preparing national food guidelines, Garnett added.

Recent evidence suggests that climate change, biodiversity loss and other pressures have reached such rates of change that threaten the capacity of the Earth’s ecosystems.

The question is not how can sustainable food production help us achieve zero hunger, but rather how can we prevent more hunger resulting from ecosystem degradation.

“Feeding a growing global population while nurturing the planet will be a monumental challenge, but it can be achieved by transforming food systems and agriculture, embracing sustainable living and working practices, improving governance and securing the political will to act,” Ramos told Down To Earth.

Classification of the countries with and without dietary guidelines, according to their income level (following the classification by the World Bank).

“Involving the agriculture sector in the revision of dietary guidelines can help better align agricultural production with the nutrition needs of the population,” Ramos added.

Good eating habits promote good nutrition, health and well-being of the people practising them. In the long-term, healthy eating practices have to go hand in hand with sustainability as it is the well-being of future generations that is at play.

“Eating behavior is multifactorial and extremely complex. “The factors at play range from the individual, for instance preference of certain foods to the inter-personal, what people choose to eat, the social, what society in general dictates, and the environmental and institutional spheres, for example laws, regulations, trade and advertisements,” Ramos said.

Meat can be a good source of animal protein and bio-available micronutrients and may be eaten in moderation, the FAO nutrition officer said.

Some people benefit from including some animal source food in their diets. However, excess meat consumption has both negative health and environmental consequences, Ramos warned.

The size of its footprint also depends on how livestock is raised, the efficiency of production and transportation chain and how waste is treated.

There is a need to take into consideration aspects such as sustainability, both economic and social, since raising livestock can mean a lot for the livelihoods of small producers.

“The main problem is that the distribution of meat consumption worldwide is very much skewed with some people having too much and others having too little,” Ramos added.

Both the charts taken from the report published by FAO and FCRN.