Slay those symptoms: How some giloy can help amid COVID-19 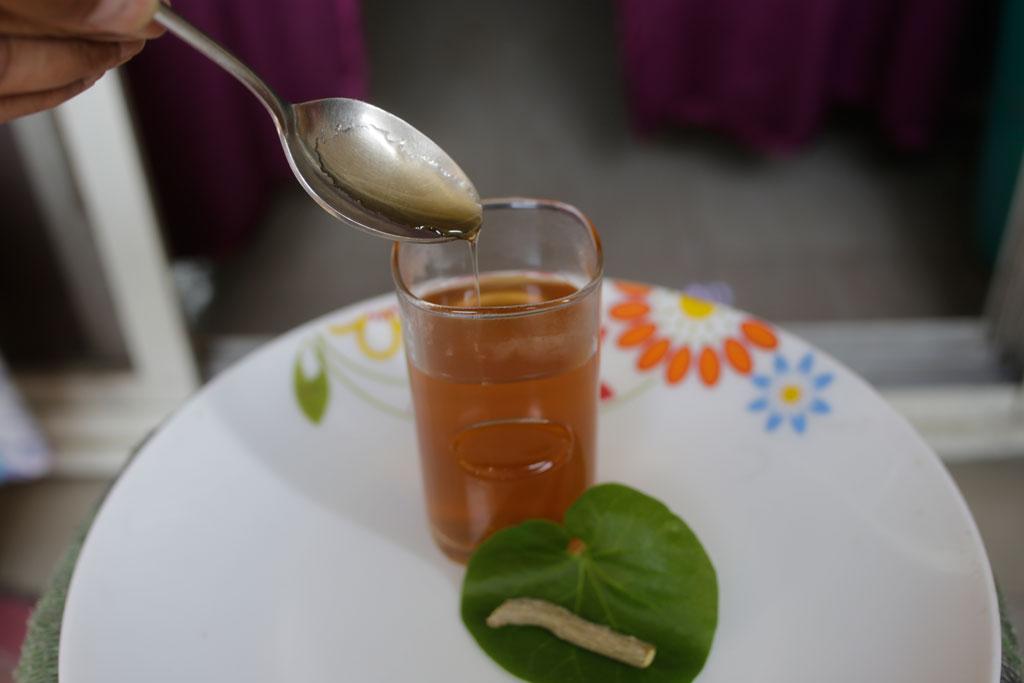 Large, heart-shaped leaves of giloy (heart-leaved moonseed, Tinospora cordifolia) peeped out from behind a pillar in front of my house as I recuperated from the novel coronavirus disease (COVID-19).

It was just one of the many giloy creepers the residents had planted after chikungunya ravaged the south Delhi neighbourhood in 2010. Since then, people in the locality have used stems of these creepers to prepare herbal tea during all kinds of viral fevers.

It is slightly bitter but easy to make (see recipe). This time as COVID-19 swept across the national capital, I could see many in my neighbourhood relying on giloy’s woody vines to alleviate their symptoms.

Soon after the outbreak of the SARS-CoV-2 virus in the country, the Union Ministry of Ayush had released an advisory, National Clinical Management Protocol based on Ayurveda and Yoga for management of COVID-19, which prescribes giloy as one of the prophylactic care measures against COVID-19.

People who are at high risk of the infection or are regularly exposed to the virus should take 500 mg extract or 1-3 g powder twice every day with warm water for 15 days or one month, it says. While undergoing conventional treatment for the disease or recovering from it, the ministry advises taking giloy in combination with amla (Indian gooseberry, Emblica officinalis) and gokshura (Tribulus terrestris) in prescribed doses to manage symptoms like fever, sore throat, headache and tiredness.

The plant has a long tradition of use for its therapeutic properties. Ayurveda refers to it as guduchi, which means “protector from diseases”, or as amrita or nectar which has the property to make the user immortal. Several Ayurveda texts mention giloy as a patra shaka (leafy vegetable), suggesting that the plant was used as a vegetable.

Studies have established that giloy leaves are rich in vitamin C and minerals, while the starch from the stem (called guduchi satva) is full of calcium and iron. The stem extract helps control diabetes and arthritis, strengthens immune response and aids in digestion.

In recent years, studies are trying to explore its antiviral properties. The herb is effective in controlling hepatitis A virus, according to a study published in the International Journal of Scientific Research in Biological Sciences in June 2018. Ethanolic extract of the whole plant was found effective against the virus in a dose-dependent manner in laboratory studies, with efficacy being maximum at 50 μg/ml concentration, says the study.

Another paper, published in the Indian Journal of Pharmacology in 2008, says 60 per cent of hiv patients who received treatment with extract of giloy reported a decrease in the incidence of symptoms associated with this autoimmune disease. Compared to this, 20 per cent people on placebo reported improvement in symptoms of hiv.

Based on the findings, the researchers from the Government Medical College and the Government Ayurvedic College and Hospital, both in Nagpur, Maharashtra, suggest T cordifolia could be used as an adjunct (additional treatment to increase the efficacy of primary treatment) in hiv/aids management.

As more and more people attempt to adopt a healthier lifestyle following the pandemic, there is an increased demand for the beneficial stem of giloy from across the country. Since most giloy available in the market is collected from the wild, state governments have also increased the minimum support price (MSP) for it to promote collection.

Chhattisgarh, for example, increased the MSP to Rs 40 per kg in May 2020 from Rs 21. In Maharashtra’s Thane district, 300 people of the Katkari community — one of India’s 75 particularly vulnerable tribal groups — have come together to form the Adivasi Eakatmik Samajik Sanstha to collect and sell giloy from forests.

Since its formation, the self-help group has earned Rs 18.5 lakh from selling giloy powder and dry giloy stems, according to a government press release dated April 8, 2021. The Union Ministry of Tribal Affairs has also set up a central processing facility in the district where the dried stems brought in by the group are powdered, packaged and sold to Ayurvedic companies like Dabur, Baidyanath and Himalaya.

Giloy is said to have originated in the Indian subcontinent and is found across India, Myanmar, Sri Lanka and China. Though India is home to three of its 40 species — T cordifolia, T sinensis and T crispa — they can be easily grown as a rain-fed crop.

The National Medicinal Plants Board, Delhi, has recently brought out guidelines for its cultivation, which say the vine grows best as an inter-crop with native trees like neem (Azadirachta indica). It is said that when grown with neem, giloy takes up its medicinal properties. Fresh twigs are also said to be more efficient than dried stems. Since it can grow profusely in pots, all one needs to do is plant a small piece of the stem.

Crush the ingredients and boil in 300 ml water using a pan with a thick base. Boil till the water reduces to 200 ml. Strain the concoction in a cup and add honey. It is said to be more effective when consumed on an empty stomach.