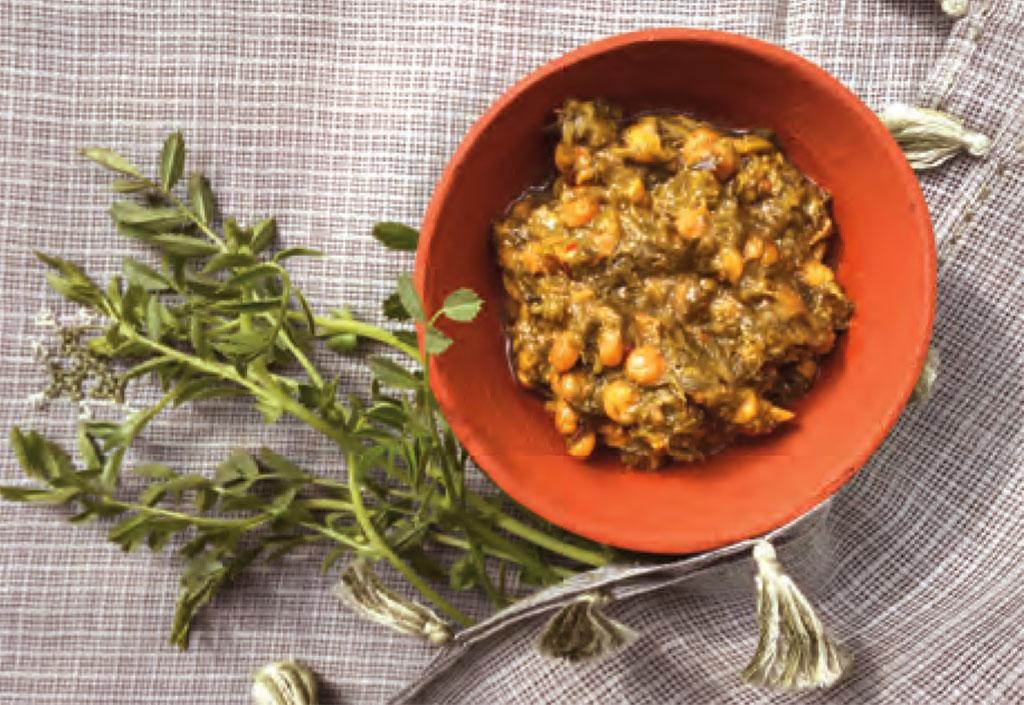 During winters, carts loaded with leafy green vegetables are a common sight in Delhi. Vendors ferry around a variety of greens such as mustard, spinach and fenugreek. Once in a while, but not often, they get chickpea greens or chane ka saag. Chickpea (Cicer arietinum) — the second-most commonly grown legume in the world — is cultivated for its protein-rich seeds and not for the green leaves, which is why finding them in the market is a rarity.

To improve the yield of chickpea, these tender leaves are nipped off young plants — this makes the plant bushy as it promotes the growth of lateral branches which help produce more seeds. The leaves are slightly sour in taste due to the presence of oxalic and malic acids. In villages, it was common to see children snacking on them. The farmers would not mind as long as the children plucked only the young leaves at the top. The sour taste is lost if the leaves are washed.

The saag is rarely available in the market, but you don’t have to lose heart if you do not find the leaves with the vendor. You can grow them at home, taking a lesson from the microgreens fad. Instead of harvesting the plants immediately after the first two leaves are formed, let the plants grow for a longer period till the shoots bear more leaves. The appropriate number of leaves would be available in about 10 days.

The desi variety — that has small and brown seeds — is better for the purpose of growing microgreens. Soak the seeds in water for a day and then plant them, covered with a thin layer of soil. Let them grow in sunlight and water the plants regularly. They grow quickly, which is why in schools, children are taught about seed germination using chickpea.

Studies have shown that chickpea leaves are nutritious. They are a good source of both macronutrient minerals (calcium, magnesium, potassium, phosphorus) and micronutrient minerals (iron, zinc, manganese, copper and boron), and the levels of most of these minerals significantly exceed those reported for spinach and cabbage, according to a study published in the Journal of the Science of Food and Agriculture in 2003.

Researchers from the Punjab Agricultural University, Ludhiana, estimate that 100 gramme dried leaves provide as much as 93 milligramme iron; thye recommend that the leaf powder should be incorporated in traditional foods such as chappati and poori (roasted and fried wheat breads) to meet nutritional requirements.

Traditionally, the saag is a part of the cuisine only in states where chickpea is cultivated. These include Uttar Pradesh, Maharashtra, Rajasthan, Madhya Pradesh, Andhra Pradesh, Telangana, Gujarat, Tamil Nadu, Jharkhand and Bihar. Though the leaves can be dried and stored, formal markets have not been created for them so far, unlike those for moringa leaves.

This is unfortunate, as India is a leader in chickpea production and accounts for 65 per cent of the global production of the legume. In Uttar Pradesh, the leaves are cooked with split chickpea and the preparation is simple. Very few spices are used, to ensure that the sour taste of the leaves can be savoured (see recipe).

In the last few years, it has been found that this legume is under threat. Chickpea was domesticated in the Fertile Crescent — an area extending from western Iran to south-east Turkey — and studies show that during the domestication process, spanning over more than 10,000 years, about 80 per cent of the genetic diversity was lost.

This has made the plant susceptible to diseases, drought and increased warming. In a paper published in Nature Genetics in April 2019, the International Crops Research Institute for the Semi-Arid Tropics (ICRISAT), Hyderabad, estimates that global warming can lead up to 70 per cent loss of yield. This is a paradox, considering that chickpeas fix nitrogen, a potent greenhouse gas.

ICRISAT is trying to find ways to develop heat- and drought- tolerant varieties of chickpea which will ensure that this protein-rich legume is able to survive climate change. The institute has identified genes which can help the crop tolerate temperatures of up to 38 degree Celsius.

The crop is important for nutritional security in developing countries in South Asia and Sub-Saharan Africa, as the seeds are 23 per cent protein. Efforts such as those by ICRISAT are important to protect this versatile and nutritious crop.

Remove the hard stems and old leaves, and wash the green chickpea leaves. Chop the leaves finely. Put the leaves and the daal in a pressure cooker along with turmeric powder, salt, ghee (one teaspoon) and 2 cups of water. Allow it to pressure cook for 10 minutes (five whistles).

Open the cooker and add chilli, coriander powder and garam masala. Add ginger chilli paste and return to flame (do not close the lid). Mix corn flour with one cup of water and mix well. Add this slowly to the daal while mixing until it thickens. Place a pan on flame and put ghee along with cumin and asafoetida, and let the spices sputter. Add to the daal and cover. Mix well and serve with rotis made of corn (makke) or pearl millet (bajra) flour.

This was first published in Down To Earth’s print edition (dated 1-15 February, 2021)