Supercharged water: Why Kerala likes its Dahasamni infused with herbs

Herbs can turn an average glass of water into a fragrant, healthy beverage 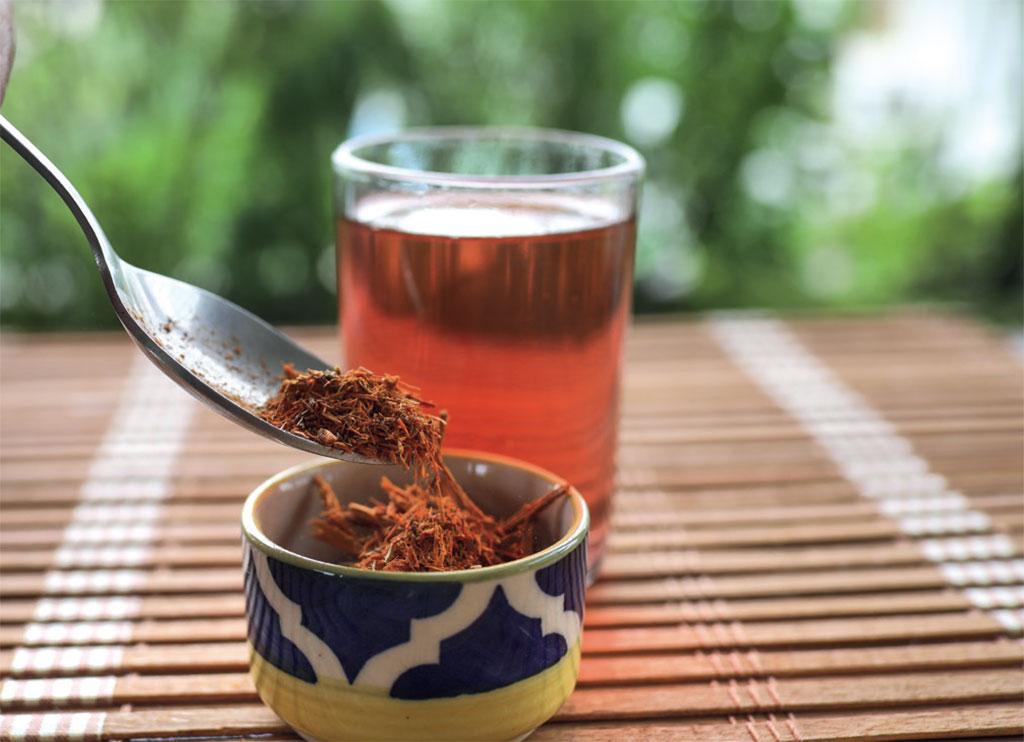 We are WE ARE what we eat, and what we drink. One of the few places where you can find these simple tenets of Ayurveda put into practice, is Kerala—the land with a rich heritage of the traditional medicine. I had a first hand experience of this during one of my reporting assignments to the coastal state. I was travelling across villages to cover a major outbreak of chikungunya. In the villages that I visited, I was greeted with a glass of pink water. The practice is so common that even restaurants serve the coloured water. I later learned that it comes loaded with antioxidants and is meant to ensure one’s wellness. Even Ayurvedic spas use it to aid in the process of detoxification.

Since most households in Kerala villages depend on well water, they traditionally consume it after boiling to ward off water-borne illnesses. Many a time what they do is throw a few herbs into the water and let it boil. They call it dahasamani or herb-infused water. Usually, it is consumed warm. Since one consumes two to three litres of water a day, dahasamani’s therapeutic effect is an added advantage.

But there is no standard recipe or name for it. People in Kerala choose from a variety of herbs and condiments like dry ginger, cardamom, cloves, coriander seeds, cumin seeds, basil vetiver and sandalwood to prepare the water. When cumin seeds are added, they call it jeeraka vella; malli vella when infused with coriander seeds. The pink water is prepared using a concoction of herbs, that include the wood of pathimukham or Himalayan cherry tree, and are available as ready-mixes sold in Ayurvedic shops.

The tree, Prunus cerasoides in scientific lexicon, belongs to the Rosacease family and is closely related to apples. It has a range of applications in traditional medicine and is used in proprietary products, such as dashmoolarista, draksadi kvatha churna, kumkumadi taila and chandanadi taila. Several research suggests that its wood, which imparts pink colour when added to water, has medicinal value. One study by researchers from South Korea, China and the US shows that the tree parts contain relatively high levels of flavones and isoflavones which can work as potential sources of phytoestrogens and help alleviate postmenopausal symptom. The paper has been published in the June 2020 issue of journal Phytotherapy Research.

Another study by the Department of Microbiology at Guru Nanak Dev University, Amritsar, underscores the tree’s ability to purify water. The researchers looked at its constituents responsible for antimicrobial activity and found that its active ingredients could kill microbes like Klebsiella pneumoniae and Staphylococcus aureus. Herbal alternatives are being explored against the two microbes that have shown resistance to multiple antibiotics in recent years. Ethyl acetate is the best organic solution to extract the active ingredients from the stem bark of Himalayan cherry, which can then be used to develop broad-spectrum drugs against the microbes, say the researchers in the journal Applied Biochemistry and Biotechnology in August 2019.

In Mizoram, the bark of P cerasoides is traditionally used to treat skin infections like eczema, swelling and wounds. Researchers from the Mizoram University in Aizawl write in the September 2014 issue of the Asian Pacific Journal of Tropical Medicine that the plant’s efficacy is due to the presence of trace elements like iron, zinc, copper, manganese, cobalt and vanadium. Research also shows its wood extracts in small quantities can stimulate respiration, improve digestion and promote a sense of well-being. However, there are indications that its young shoots and seeds contain cyanogenic glycosides, which if consumed in large quantities can be poisonous.

But there is no internal distribution of this tree in Kerala, says P Sujanapal, senior scientist at the Kerala Forest Research Institute, Thrissur. Getting it all the way from the Himalayas makes it expensive. So, many dahasamani mixes use the bark of sappan wood (Caesalpinia sappan) for the pink colour. This small tree is native to Indo-Malaysian region, grows easily in the climatic conditions of Kerala and is sometimes promoted as a live fence around forest areas to protect wild animals, says Sujanapal. A red pigment, called brazilin, can be obtained from the wood which is then used as a natural dye on fabrics like cotton, silk and wool and for making red paints and inks.

Some researchers in Tamil Nadu have found that the dye can be used as a food colour and that its chemicals are not toxic to humans even when consumed in high doses. A decoction of the heartwood in fact helps regulate menstrual flow. It is also used to cure tuberculosis, diarrhoea and dysentery and is reported as having hypoglycaemic properties. Unlike sparkling water, herbal teas and fruit infused water which, driven by strategic advertisements, have become the rage among the health conscious, the healing water of Kerala seems to have kept a low profile. So, this wet season when the risk of infection through food and water is high, why don’t you give it a try?