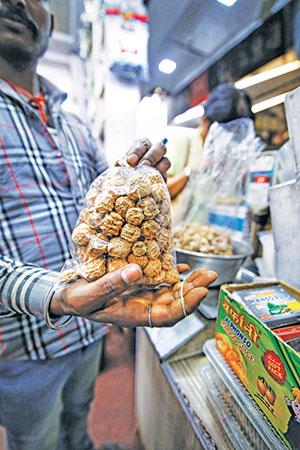 It's the quintessential multiutility food. On the surface, the small brown, green and yellow melon with striations resembles a fruit. But people mostly use kachri as a vegetable or convert it into a traditional spice that adds tanginess to Rajasthani cuisine.

Strolling through farmlands in the state, one can easily find the vines of kachri or Cucumis callosus snaking along roadsides or amid crops.

Being a drought-tolerant crop that is capable of thriving in hot and water-stressed regions, the tiny melon often grows on its own and farmers find it nothing short of pure gold.

In Jhadeli village of Nagaur district, Sahi Ram is an organic farmer who has been growing kachri for close to 20 years, along with jowar (sorghum), bajra (pearl millet) and guar (cluster bean) on 2 hectares.

Growing the crop does not involve much effort or resources. Farmers usually dry and store the seeds to be sown the following year. This practice keeps the production cost low, he says.

Ram earns Rs 1.5-2 lakh in a year from his farm. “About one-fourth of the profit comes from kachri,” he says, adding that farmers carefully harvest the tiny melon. Kachri bears fruits between October and December.

“We stack the freshly plucked fruits into three categories. One stack is stored for household consumption, while the other is sold in the local vegetable market or to a trader. The third stack is peeled and sun-dried to be sold at a premium in the off season,” explains Ram.

During the peak season, fresh kachri is sold for Rs 20-30 per kilogram. The price of dried kachri goes up to Rs 100-140 per kg as soon as the season ends.

In Pithrasar village of Bikaner district, Mangilal Jhakad and his wife say kachri is an integral part of every household in the state. The protein-rich fruit comes loaded with medicinal properties and is mainly consumed for curing cold or aiding digestion.

But kachri also ensures livelihood to many during its journey from farm to the market and beyond, offering a profit margin of Rs 40-50 per kg, says the couple which has been processing and selling the fruit for years now.

There are about 150 kachri farmers in Pithrasar. On an average, they harvest 120-150 kg of the fruit every season, of which they sell 100-120 kg after stocking some for their own consumption.

The farmers usually sell dried kachri to local spice vendors at Rs 125 per kg, who grind and package it as traditional masala. At places, self-help groups buy the fruit, make pickles out of it or use mechanised driers to make powdered spice.

Kanha Ram, a spice vendor in Nagaur city, says, “It is not just kachri powder that has captured the market, other value-added products derived from this fruit, such as pickles, chutneys and meat tenderisers, are also much in demand.”

In busy markets like those in Bikaner or Jodhpur, traders sell 500-1,000 kg of dried kachri to vendors everyday. Even in villages, shopkeepers manage to sell about 10 kg a month despite the fact that the plant grows profusely in rural areas.

The demand for dried kachri is growing beyond Rajasthan. It moves quickly off the shelves of leading e-commerce platforms, such as Amazon. It’s just a matter of time before the crop is grown as a cash crop and benefit farmers of Rajasthan.

Aakriti Srivastava is a media and communication professional. She is associated with Bikaner-based Desert Resource Centre