An old man and his baton: Meet Damodar Kashyap

Kashyap has ensured food, and livelihood in Bastar villages by offering them thriving forests 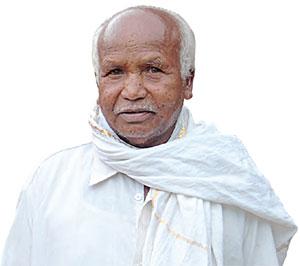 It's not always that an individual’s initiative finds place in academic curiculum. But the Chhattisgarh government has included the life saga of Damodar Kashyap in the social sciences syllabus of class 9. This septuagenarian belongs to the Bhatra community of Sandhkarmari, a village in the state’s tribal-dominated Bastar region, where he has nurtured a sprawling forest over 240 hectares. Today, the forest ensures that people in the village are self-sufficient, have adequate groundwater and a robust community-led governance system.

“The forest was always there. It also had a sacred grove. But in the 1970s, when I returned from Jabdalpur after completing studies, all I could see was tree stumps. I started making people aware about the multitude of benefits a forest provides and encouraged them to plant trees. I particularly mobilised the ones who had felled trees,” says Kashyap.

In 1976, communities elected him as the head of village panchayat. Immediately after this, he initiated a communityled system to regenerate the denuded patches of forests and to protect the village’s intact forests. As part of this, he organised plantation drives from time to time. But to ensure community ownership over the campaign, he introduced the thengapalli system of protection. Under the system, forest protection is the responsibility of the entire village. Families take turns to patrol the forest from loggers. Every morning, they venture to the forest wielding the symbolic thenga (baton), with a flag attached to it.

Upon their return in the evening, they would place the thenga in front of a household, which has to take the charge next day along with representatives of two neighbouring households. There is strict rule on how to use the forest produce. Residents can collect dry and dead branches to use in construction or as firewood. But anyone caught felling a tree is slapped with a fine of Rs 500. Cattle grazing in the forest has also been restricted. Over time, thengapalli has become a symbolic activity only as the village no more reports illegal felling or violation of community rules on forest uses. Initially, 10 to 12 people were assigned the patrolling duty.

Now only three stay on guard. The village boasts of several kinds of trees, herbs and climbers. The major species include sal, tendu, mahua, chironji and mango. People in the village not only collect fruits and mushrooms from the forests for household consumption, they also sell to earn. Small wonder, for close to 35 years Kashyap has remained the unopposed head of the village panchayat.

His ability to conserve the forest and ensure sustainable livelihoods by deploying traditional knowledge and instilling community ownership has earned him several accolades. The message in that metaphorical baton is spreading to neighbouring villages, where communities depend on forests. Kashyap now advises them on how to regenerate a forest and insure livelihoods.