Claims under FRA being wrongfully rejected in Bengal

After the February 13 order of the Supreme Court in the FRA case, MoTA had held a consultation with all states on March 6. It was held to discuss issues related to FRA implementation.

In that consultation, the minutes of which were accessed by Down to Earth, MoTA observed: "The rate of rejection in West Bengal is 65 per cent, which consists of 52 per cent Schedule Tribe (ST) and 98 per cent OTFD claims. The state out rightly rejected all CFR (Community Forest Rights) claims for OTFD and 88 per cent claims for ST."

The reason cited by West Bengal for the high level of rejection of CFR claims of OTFDs — unavailability of evidence and providing evidence of 75 years of occupation — showed 'flawed interpretation' of FRA, the ministry said.

"The reason cited for such high rate of rejection exhibit flawed implementation of the provisions of the act (Forest Rights Act, (FRA) 2006), and necessity of capacity building of concerned officers," the minutes say.

However, the state has seemingly adopted a flawed practice to get the rid of the claims.

Notices are being sent by the Block Development Officers (BDO) in Alipurduar district of the state, informing people that their claims have been rejected.

Under FRA, BDO is one of the members of the Sub-Divisional Level Committee (SDLC) and does not have the authority to single-handedly reject a claim. 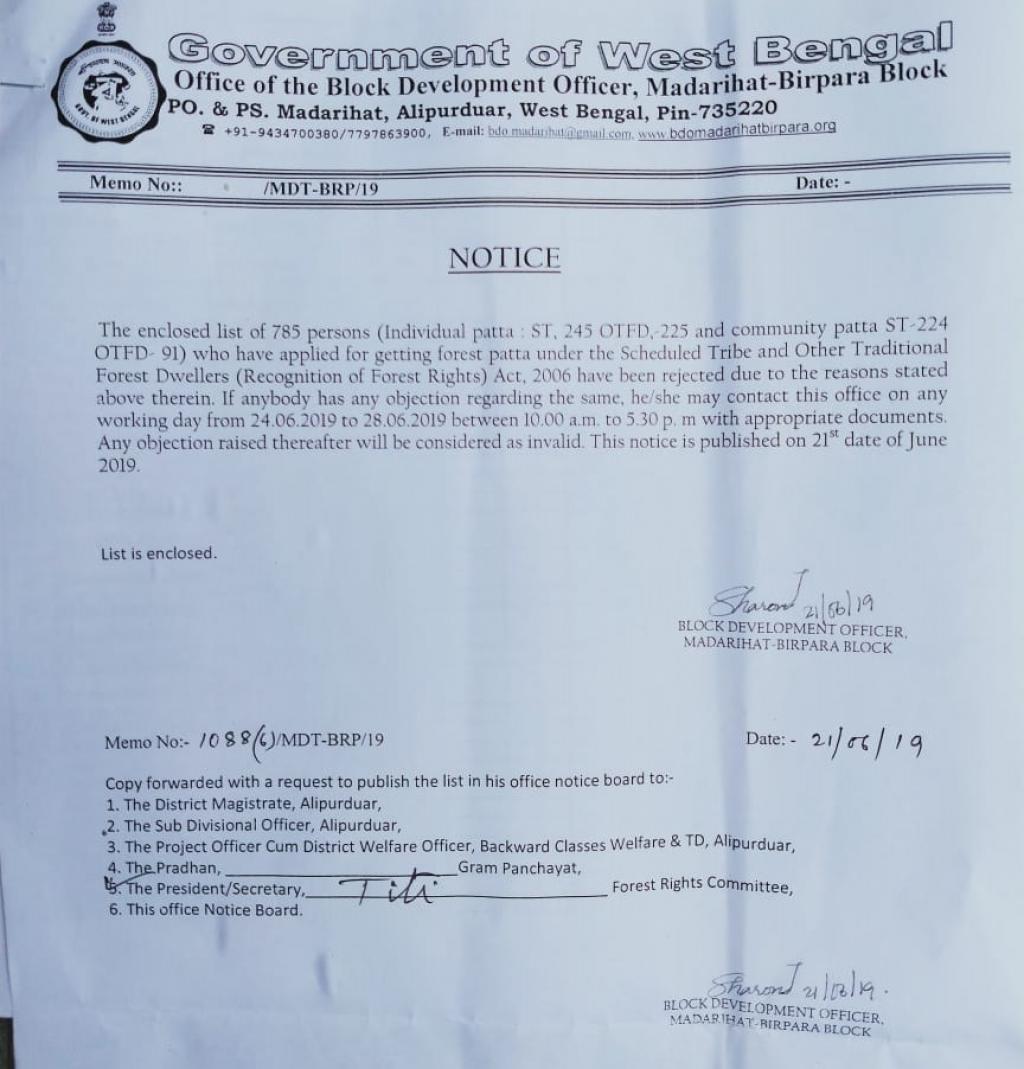 "Most forest dwellers in West Bengal are in Alipurduar. We have also found an instance where a beat guard, a forest department official who is not a part of SDLC or Gram Sabha Level Committee, had rejected claims stating that the claim was over reserved forest and therefore could not be approved," says Souparno Lahiri of All India Forum of Forest Movements, an organisation working with forest dwellers for the implementation of FRA.

Under the provisions of FRA, claims can be sought on any piece of forest land, notwithstanding whether that forest land is Protected, Reserved or a Tiger Reserve. Interestingly, all these rejections were made by the state after its meeting with MoTA.

"As far as the Duars region of West Bengal is concerned, in the forest divisions of Alipurduar, Jalpaiguri and Coochbehar, the concerned officials have never followed FRA.

"Claims have been piling up since 2010. It has now come to our knowledge that such pending claims have been showed as rejected at the instance of the forest department. The documents show clear violation of the act by sub-divisional, block- and district-level officials. According to the act, they should be prosecuted," Lahiri says.