Eucalyptus, acacia and teak, not Sal: Why CAG is critical of Odisha’s afforestation efforts

There was an ‘acute shortfall’ in achieving plantation targets in Odisha due to lack of coordination, working plan, improper selection of plantation sites and plant species 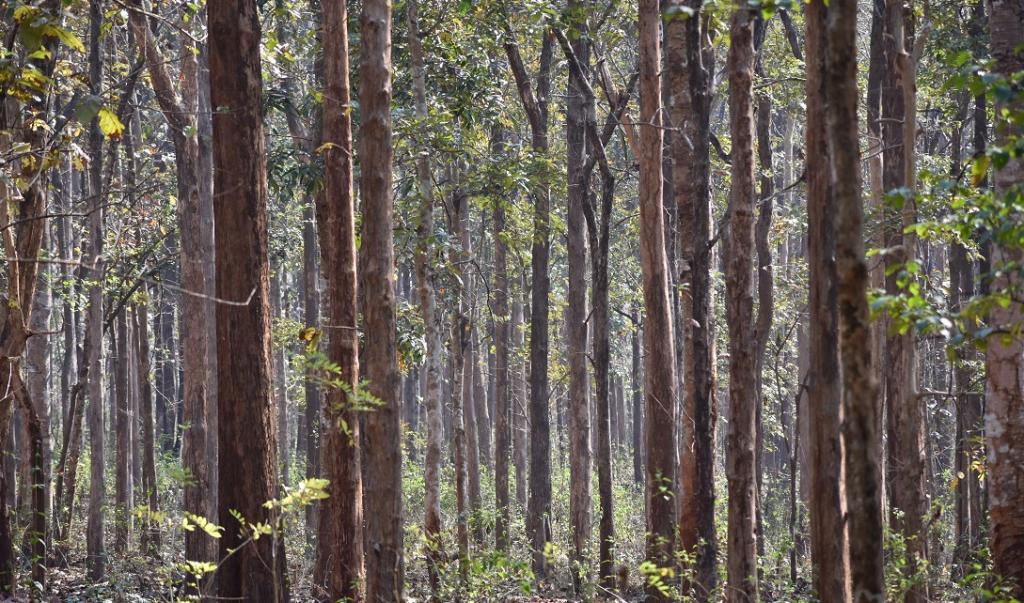 The CAG report criticised the Odisha government for choosing teak, eucalyptus and acacia for afforestation efforts rather than Sal, which is native to the state. Photo: iStock

There was an ‘an acute shortfall’ in the Odisha government’s achieving plantation targets for the period 2013-14 to 2017-18, according to the report of the Comptroller and Auditor General of India (CAG) released August 1, 2022.

The shortfall in achievement of plantation targets by the Forest, Environment and Climate Change Department ranged from 11.98 per cent to 50.89 per cent, it added.

The CAG report cited a number of reasons as being behind the shortfall. This included lack of coordination, working plan, improper selection of plantation sites and plant species.

The performance audit was conducted from May 2019 to February 2021 in 13 of 49 forest divisions of Odisha selected on the basis of random sampling.

Odisha’s forest cover was estimated to be 51,619 square kilometres, 33.15 per cent of the state’s geographical area, according to the India State of Forest Report 2019.

The report stated that all scheme-wise annual targets fixed and achieved, both physical and financial, were not provided for audit in spite of repeated requests to the department.

The audit scrutinised the records of diversion of forest land and implementation of compensatory afforestation (CA). It found that the targets of CA under normal as well as pending plantations (yet to be planted) fixed during 2013-18 were not achieved fully.

“Out of total 1,187 plantation journals selected for audit; 491 journals were scrutinised under the Compensatory Afforestation Fund Act (CAMPA), 2016,” the report read.

It was revealed that three plantations over 820 hectares (ha), with an expenditure of Rs 1.78 crore partially failed as the survival of plants was within 40 to 60 per cent.

The report said the state was supposed to make its own State Forest Policy, in line with the National Forest Policy, by considering local geo-climatic conditions of the region. But failure to do so resulted in ‘inadequate planning in enhancement of green cover in the State’.

The report added that while Sal is the principal indigenous species of Odisha, teak, acacia and eucalyptus were planted as major species, affecting the native vegetation and biodiversity in the state.

The report stated that according to plantation journals, 10,000 plants of five species were planted. But only 1,837 plants survived, according to unmanned ariel vehicle evaluation.

Hence, the survival rate was 18.37 per cent, which can be treated as ‘failed plantation’. Also, 1,329 of the surviving 1,835 teak plants were five feet in height even after five years of plantation, according to their height charts.

“The department incurred unfruitful expenditure worth Rs 13.17 crore as 191 of 485 plantations were not successful. The reasons for failure were improper selection of plantation sites in dense forest and delay in submission of plantation project proposals by divisional forest officers,” the CAG report noted.

It also observed that the forest divisions were working without approved Working Plans or Working Schemes. Lack of coordinated planning among ranges, divisions and forest headquarters prevented long-term planning and fixation of annual targets, the report said.

Ariel surveys revealed that a large number of plantation activities were concentrated in areas like along the pathways, leaving degraded patches in the middle of the forest unplanted, the report said.

Bamboo plantations were executed inside forests having canopy cover of more than 40 per cent, affecting the growth of the clumps due to poor availability of light, it added.

The Department could achieve only 51.74 per cent of the total target of bamboo plantations under the National Bamboo Mission.

“The variation in performance of different plantations was attributed to variation in site quality, species taken and level of management. Selection of wrong sites and poor management had resulted in the failure of plantations in 251 sites, as found in Audit,” the report said.

It added that there was a dearth in maintaining plantation journals and pre- and post-planting data, year- wise expenditure and details of the Range Officer’s quarterly inspections and other necessary formalities.

All these could not be incorporated in the report, making it impossible for it to authenticate execution of plantations. The non-release of funds from the second year onwards for maintenance of plantations executed under the Mahatma Gandhi National Rural Employment Guarantee Scheme also affected their growth.

“Required data relating to various plantation schemes, such as scheme-wise annual target and achievement, allotment and expenditure, survival percentage were neither maintained at government nor at Principal Chief Conservator of Forest level,” the report read.

The target for CA programmes under CAMPA was not achieved within the stipulated period of three years and hence could not compensate the forest cover against the diversion of forest land.