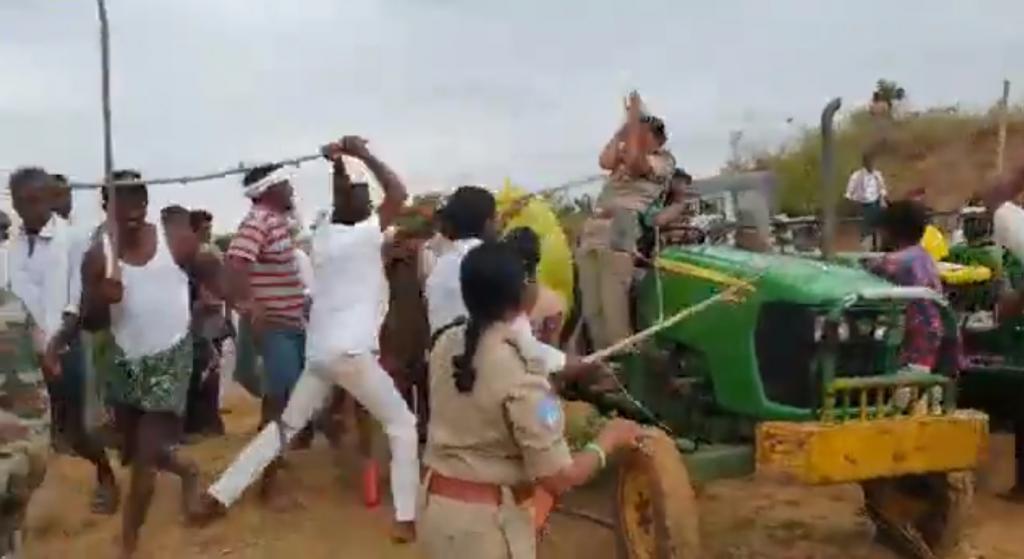 A forest officer was badly beaten and injured on June 30 after being attacked the supporters of the brother of a Telangana Rashtra Samithi (TRS) Member of Legislative Assembly (MLA).

Kagaznagar Forest Range Officer Anitha Chole had gone to Sarasala village near Kagaznagar town in Kumram Bheem Asifabad district on the morning of June 30 with 40 forest personnel and 30 policemen and women. They were to clear a plot of government-owned land in order to prepare it for an afforestation drive, according to media reports.

However, they were surrounded by village residents who claimed the land was theirs. The group, led by Komaram Bheem Asifabad zilla parishad vice-chairman Koneru Krishna, who is also the brother of Sirpur MLA Koneru Konappa, were armed with bamboo sticks.

When Anitha climbed a government tractor in order to pacify the crowd, they started raining blows with the sticks on her. The official was rescued by police and taken to a hospital in Kagaznagar, where she is being treated for a fractured hand.

A world-wide inventory is being prepared for plants

A team of researchers from the Department of Biodiversity, Macroecology and Biogeography at the University of Göttingen, Germany, has made an inventory for plants from all over the world.

The stated aim of the scientists, according to a media report,  is to document “all the information related to the the sheer number of known species and complex multiple facets of biodiversity, such as species richness, functional plant characteristics and relatedness, as human-made habitat destruction and climate change are destroying global biodiversity, including plants”.

For preparing the Global Inventory of Floras and Traits (GIFT), the researchers collected and standardised huge amounts of information from hundreds of published checklists and numerous unpublished regional inventories.

The inventory has collated information about plant species composition in nearly 2,900 regions including islands and protected areas. The data covers about 79 per cent of the global land surface and includes 80 per cent (over 315,000 species) of all plant species known to science.

The database will link plant species to their geographic distribution, structural characteristics and to modern reconstructions of their evolutionary relationships, as well as to geographic, climatic and socio-economic characteristics of the regions.

Union Minister for Environment, Forest and Climate Change, Prakash Javadekar, has told the Lok Sabha that 9,253 people have been arrested for poaching across India between 2012 and 2018, according to a media report.

The minister was responding to a query. The figure is according to available records of the Wildlife Crime Control Board (WCCB).

Javadekar further informed that according to the National Tiger Conservation Authority (NTCA), there have been 141 cases of poaching, while 84 seizures have been made between 2012 and 2018.

Madhya Pradesh has reported the maximum number of poaching and seizure cases, at 31 and 12 incidents, respectively.

Five tigers, including an adult male, two adult females and two cubs have been captured for the first time by night-vision cameras in Madhya Pradesh’s Kheoni Wildlife Sanctuary, 110 kilometres (km) from Dewas, according to a media report. The tigers were seen drinking water, according to a media report. Vigil has been tightened across the sanctuary after the development

The Kheoni sanctuary, located in the Kannod tehsil of Dewas district, was established in 1955 and is spread over 123 square km. It is home to mostly cheetal, sambhar, blue bull, four-horned antelope, wild boar, barking deer and wolves.