Like forests, grasslands are critical wildlife habitats. But their protection is rarely a priority 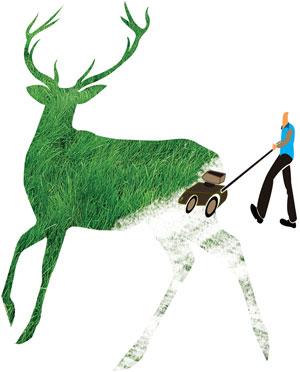 On a recent visit to Pench Tiger Reserve in Madhya Pradesh I could not see a single tiger during four hours of jungle safari. But I was rewarded by frequent sightings of spotted deer and sambar in the mixed dry deciduous forests. I also spotted groups of bison, nilgai and wild boar. Since the reserve supports a high density of ungulates, it is a massive task for the reserve managers to maintain forage for them round the year. Subharanjan Sen, the director of the reserve, says his officials maintain an extensive patch of grassland, spanning 42 hectares, by removing tree saplings. This patch provides fodder for herbivores, which in turn are food for tigers.

It is a praiseworthy effort because across the world, and especially in the Asia-Pacific region, the grassland is one of the most threatened and neglected ecosystems. Grasslands form unique habitats of several wild species. These species are now pushed to the edge of extinction with the shrinking and degradation of grasslands. For instance, grasslands of the arid regions form unique habitats for the blackbuck, a Schedule I species as per the Wildlife Protection Act.

The Wild Ass Sanctuary, spanning 5,000 sq km of the Little Rann of Kutch, and its adjoining areas are the only places where the endangered Indian wild ass still survives. The Great Indian Bustard, one of the heaviest flying birds, has become critically endangered because of the continuous loss and deterioration of arid and semi-arid grasslands. The unique shola grasslands in the high altitude region of the Western Ghats provide habitats for Nilgiri tahr, an endangered mountain ungulate endemic to the Western Ghats. Loss of this habitat is one of the prime causes of its population decline. Monocultures of eucalyptus and black wattle in the mid-1980s aggravated the degradation of these rolling grasslands. “Heavy influx of tourists to the Eravikulam National Park in Kerala and development of infrastructure for such tourism just outside of the park have been mounting pressure on the surrounding shola grassland ecosystem,” points out P V Karunakaran, principal scientist at Salim Ali Centre for Ornithology and Natural History in Coimbatore.

Manipur deer or thamin, Asiatic ibex, Kashmir stag or hangul, Kiang or Tibetan wild ass, Himalayan tahr, Swamp deer or barasingha, Great Indian rhinoceros, hog deer and many more are under stress due to the degradation of grassland ecosystems in different eco-climatic zones, from the coastal regions to the alpine meadows and steppes. Besides wild animals, a large number of birds living in these grasslands are also in peril.

Grasslands are not just important wildlife habitats. They are also reservoirs of crop genes and the backbone of the livelihood of pastoral communities. Historically, grasslands have provided many food grains, including rice, wheat and millets, for human beings. In times of climate change many agricultural crops may not cope with the changes. This gene pool acts as a biodiversity safety net, which can be used for developing more crop varieties.

Unfortunately, large parts of grasslands have been converted into agricultural land or diverted for other purposes. Over the years, changes have crept into the traditional pastoral practices as well. “The pastoral communities have been replacing small herbivores such as sheep and goats by yak in the Khangchendzonga landscape of Sikkim,” says Sandeep Tambe, former special secretary at the Department of Rural Management and Development, Sikkim, and current faculty member at the Indian Institute of Forest Management, who has studied the grasslands of Khangchendzonga for years. Trampling by large herbivores like yak and their slow movement and bigger bite size alter the composition and biomass of the moist grasslands on hill slopes. This subsequently causes soil erosion and degradation of the fragile high altitude hilly ecosystem, he adds.

“Earlier, the Maldharis of the Banni region of Gujarat followed a system of rotational grazing to maintain grasslands. Over time, they have abandoned this practice and shifted from cattle to buffalo rearing,” says Arun Mani Dixit, a senior programme associate at the Centre for Environment and Social Concerns in Ahmedabad. Since the Maldharis have switched over to the sedentary practice of livestock rearing, the continuous grazing in a limited area gives little time for grasslands to recuperate.

Alien invasive plants are another threat. Proliferation of mesquite, a native of arid regions of south-western USA and Mexico, is known to degrade grasslands in western and southern India, including Gujarat and Tamil Nadu. The Blackbuck (Velavadar) National Park, which represents the semi-arid and coastal saline grassland ecosystems in Gujarat, is not untouched by the invasion of mesquite. “The park managers have been trying to remove the seedlings and saplings of mesquite from the grassland areas for years. Blackbucks generally do not prefer tall grass tracts and move out to short grass tracts,” says Niraj Joshi, head of research at the Aga Khan Rural Support Programme in Ahmedabad. The national park is an equally important habitat for the Indian grey wolf, an endangered species. These grasslands are also the largest roosting site of harriers and are visited by the endangered Lesser Florican.

The wet grasslands in the world heritage site in the Northeast, Kaziranga National Park, are under stress due to the spread of Mimosa diplotricha. It outcompetes the existing plants. Being a climber, it rolls around the grasses, hampering the growth of grass as well as animals’ movement, especially the hog deer. A study of the Rain Forest Research Institute at Jorhat on the ecology of Mimosa reports that apart from high production of seeds, long viability and good dispersal mechanism, vehicular movement also facilitates the spread of Mimosa seeds in the park.

Grasslands intermingling with deciduous forests in the highlands of central India, such as the Vindhyas and the Satpuras, form corridors for migration of species between the two well-known biodiversity hot spots in India, the Western Ghats and the Himalayas. Unfortunately, the Himalayan steppes in Tibetan plateaus and the grasslands in arid deserts are casually visualised as wasteland.

Against this backdrop, the attempt made by the Pench Tiger Reserve authorities to maintain grasslands is a welcome step. The practice is followed in a few other areas. About 490 sq km area in the Terai was established as Dudhwa National Park in 1977 to conserve its flora and fauna in the landscape predominated by tall wet grasses. The managers of Melghat Tiger Reserve have selected the evacuated village sites for developing grasslands because such areas had abandoned agricultural lands with negligible tree cover.