Honey, they shrunk our livelihoods!

Honey collectors gamble with their lives to eke out a livelihood in the Sundarbans, but are forced to sell it to the forest department for a pittance 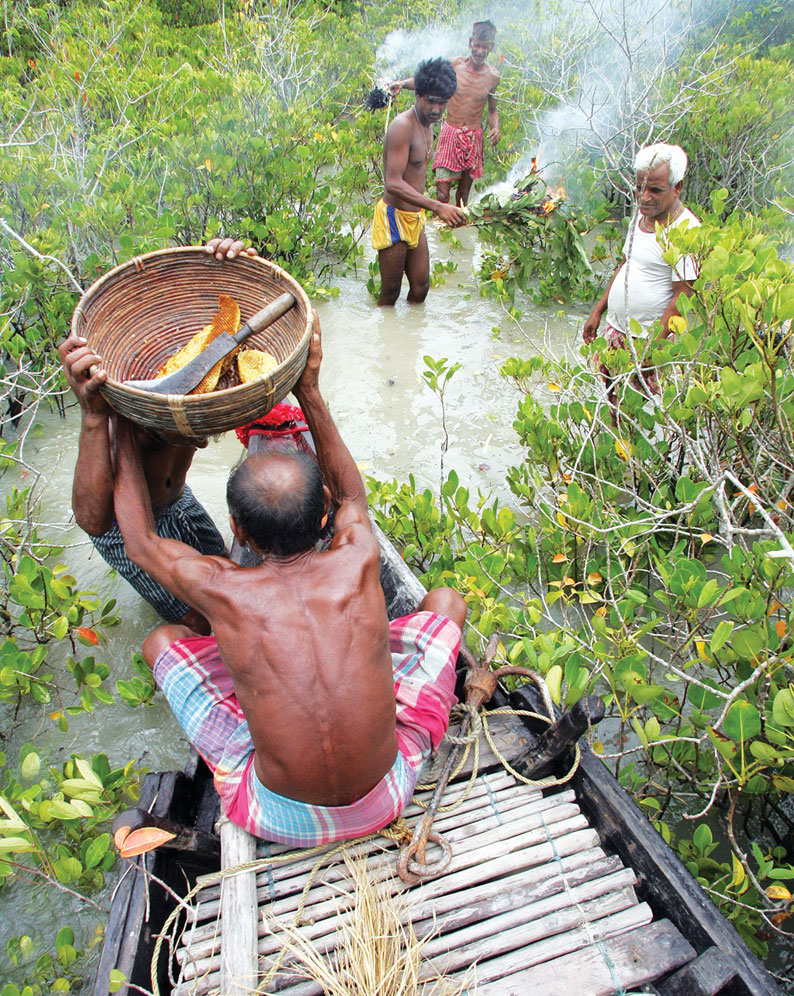 Sitting outside her makeshift structure in Emilibari, a small village in Satjelia Island, which is close to the Sundarban Tiger Reserve in West Bengal, Arati Haldar narrates a frightening incident. Her husband, Sujit, had left the village along with a team of mawaleys, as honey collectors are called in the Sundarbans, deep inside the dense mangrove swamps nine years ago. The group stood below a tree to collect honey, completely oblivious of the fact that they were being stalked by the deadliest predator of the forest. The tiger pounced on Sujit. He struggled with the tiger for a while and cried out for help. But his group members froze in terror and left him alone.

His battle for life soon turned into despair, as the tiger carried him away deep inside the forests. When the villagers went together in the evening to search for the remains of his body, they failed to trace him. Sujit’s family received no compensation from the Forest Department (FD) in spite of assurances. He left behind just two sacks of grain and some grocery for his wife Arati and a physically challenged son. Sujit is one among many honey collectors who risk their lives for a livelihood in the Sundarbans. Honey collectors, in fact, have a popular saying: “Modhu khoja mane bagh khoja” (finding honey equates finding a tiger).

The Sundarban Biosphere Reserve (SBR) is spread over 9,630 sq km. Out of this, the forest cover is 4,263 sq km including the core and the buffer areas. The rest 5,367 sq km of the SBR is the transition zone, divided into 19 inhabited blocks in the North and South 24 Parganas districts. Each block is further divided into islands, which are crisscrossed by a maze of distributed waterways and narrow creeks in these dense forests. Around 4.5 million people inhabit these 19 blocks.

Honey, a prime minor forest produce (MFP) in these villages, is integral to the sustenance of the forest dwellers throughout the year. Honey collectors run the risk of being mauled by tigers since the best honey reserves are located deep inside the mangrove swamps—the tiger lands.

After reaching a forested island, mawaleys step out, leaving one person behind on the boat. Known as bhorel in the local language, he carries a whistle to help the honey collectors trace their boat while returning. He also cooks for the collectors in the boat. While entering the forests, they observe some rituals. They pray to forest goddess Bonbibi, who is believed to protect the poor forest workers against the demons of the forest. Sacrament in the form of hens and sugar drop candies is offered to Bonbibi.

Honey collectors venture out bare bodied with only a towel tied to their waists and hold a stick on their right shoulder. They carry a steel vessel to store the honey and a large knife or dagger to cut the hive.

While treading slowly inside the forests, the buzz of the Asian honeybees (Apis Dorsata) is the only signal that helps them locate a good hive. Once a good hive is discovered, the other members are communicated through a sign language. Huge bundles of grass and leaves of the hental tree are collected to light a fire to blow away the bees from the hive. These giant honeybees are the biggest in the world and are also the most aggressive. Before extracting the honey, the collectors cover their faces with a towel to prevent bee stings. The smoke disbands bees and they instinctively behave as if the forests are on fire.

This is the time when one of the collectors climbs up the tree to break the hive with a dagger, while the others stand below holding the steel vessel in which the honey is collected. The collectors rationally leave behind a considerable part of the hive, to allow the honeybees make a new hive. It takes about 14-15 days for the honeybees to re-build the hive.

After the first chunk of the hive is broken, the collectors offer the first piece as a sacrament to Bonbibi. A mature bee hive can fetch the collectors up to 20 kg of honey. The collectors carry the honey pot to the boat, navigating the torturous journey based on the whistle sounds of the bhorel.

Honey collectors work from seven in the morning till four in the evening. They don’t enter the forests in the afternoon as they believe it is inappropriate to disturb the resting animals. The process of honey collection and the rituals observed by them are not only to treat forests as a consecrated space, but to mediate a mutual understanding between the local rules of forest usage and the principles of sustainable extraction.

However their precarious expeditions earn them little returns. The FD decides the price—R115 per kg, which is much lower than the market price of about Rs 300 per kg. Though the FD in 2016 approved the trade of some amounts of honey without state intervention, honey collectors say that companies like Dabur offer prices as low as Rs 85 per kg, in addition to imposing to several quality tests.

Honey collectors interpret this as a strategy by the FD so that they concede with the state appropriation of MFP. Some non-profits, of late, like the Sundarban Jana Sramajibi Manch are helping forest dwellers to sell honey at Rs 200/kg.

One of the major reasons for the state controlling the honey trade is that the Forest Rights Act, 2006, (FRA) has not been implemented in North and South 24 Parganas districts, which include the Sundarbans. The FRA gives local communities rights over MFPS. Even in the face of large-scale protests, debates and social movements, the FD has been indifferent to the livelihood issue of forest-dependent communities. Records show that in West Bengal, as on August 31, 2016, only 43,799 of the 131,962 individual claims, and just 805 of the 10,119 community claims have been settled.

There is consensus that only the implementation of the FRA will help forest communities such as honey collectors. Experts believe that its non-implementation is largely due to the lack of coordination between Backward Class Welfare Department, the nodal agency responsible for implementing the Act in the region, and the forest department of West Bengal.

Meanwhile, for the forest dwellers who inhabit the mystical World Heritage site of the Sundarbans, any attempt to eke out a livelihood like collecting honey from forests poses several survival challenges. Their future looks grim, not only because of the climate change effects and the ensuing erosion of physical space, but also because of their everyday reality of impoverishment, sponsored by the State.

The author is with the Department of Humanities and Social Sciences, Indian Institute of Technology Bombay