75% without access to healthcare, 51% without PDS, 52% without piped water

A staggering 75 per cent of tribal villages in India lack access to healthcare, around 51 per cent don’t have access to any Public Distribution System (PDS) and 52 per cent are not covered by piped water, according to the Union government.

The data was shared by Union Minister for Tribal Affairs, Arjun Munda, in response to a parliamentary question raised in the Lok Sabha on November 18, 2019 regarding the infrastructural gap in tribal villages. (See Tribal India: A story of withouts).

While there are 1,45,000 tribal villages in the country, the data was available for only 1,17,064 villages, according to the minister’s response. A ‘tribal village’ is one where the Schedule Tribe population is more than 25 per cent.

“Tribal Sub-Plan (TSP) / Scheduled Tribe Component (STC) is dedicated source of funds for tribal development across the country. Earlier, 28 central ministries were obligated to earmark TSP / STC funds in 2010-11, which has increased to 41 ministries / departments catering to various sectors till date,” the reply says.

The 41 central ministries have been mandated to earmark STC in the range of 4.3 per cent to 17.5 per cent of their total scheme allocation every year for tribal development, it adds.

“It is observed that states where the communities are in control over land and its resources, and exercise autonomy in governance at the village, district and/or state, especially the Northeastern states, level have the best human development indicators. Political empowerment and autonomy is the key to better human well-being,” CR Bijoy of Campaign for Survival and Dignity, a national forum for forest dwellers which was active in getting the Forest Rights Act implemented in 2006, said.

“Correspondingly those states where tribal land and resource rights are not recognised or denied, and their livelihood resource base appropriated by state and non-state actors see low well-being along with state collusion in violating protective laws and empowerment laws as Panchayats (Extension to Scheduled Areas) Act 1996 and Forest Rights Act, 2006,” he added.

Bijoy said mere allocation of funds, absence of diversion and their spending did not improve matters significantly. 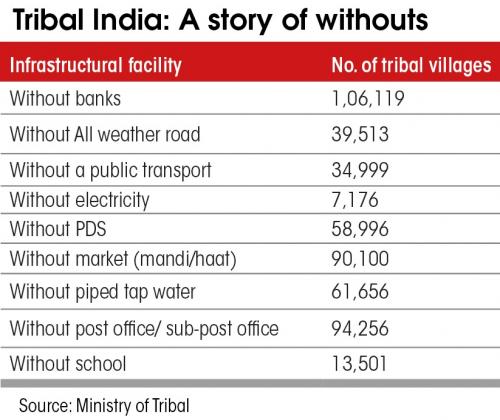