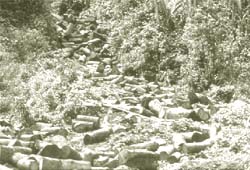 mature forests have more potential for gobbling up carbon dioxide ( co 2 ) than young ones. This was revealed in a study conducted by Ernst-Detlef Schulze, director of the Max Planck Institute for Biogeochemistry in Jena, Germany, along with his colleagues.

Huge amounts of carbon are trapped in tree trunks and branches of old forests as well as in the soil. Says Kevin R Gurney, a research scientist at the Colorado State University, usa , "It can remain trapped for a 1,000 years or more in such way." When a mature forest is logged, the roots of the trees decay and the soil is disrupted. This leads to release of carbon into the atmosphere in the form of co 2 . "It takes centuries for newly planted trees to build up such a carbon reservoir underground," says Gurney. Hence, destruction of old forests contributes in global warming.

Ageing forests were thought to release as much co 2 as they captured. But now, Schulze's study indicates that mature forest soil such as those of the undisturbed tropical rainforests, Siberian woods and some German national parks have trapped enormous amounts of carbon derived from fallen leaves, twigs and buried roots as well.

The study put a big question mark on the theory of planting new forests to combat the effects of global warming. To meet their 1997 Kyoto Protocol targets, usa and other developed countries who are bound by the protocol to reduce their emissions, have started planting trees on a large scale instead of reducing carbon emissions at source. At times, old forests are cut down and new trees are planted on the deforested land elsewhere to get credit for reducing co 2 when actually the matters are not so simple.

"New forests are fine as long as they are planted on land that was previously vacant," says Schulze. "But there has to be a focus on preserving the old growth," he adds. Several climate and forestry experts feel that the study provides a reminder that the main goal should be to reduce co 2 emissions at the source.