This is the second part to Missing: One-third of India’s recorded forests

A total of 25.87 million hectaresa of recorded forest area — forest land under the control of state government’s forest department—is not accounted for in the India State of Forest Report 2021.

It just does not exist anywhere in the report. There is no assessment in terms of its coverage. Does this land exist? Is it encroached upon? Or is it just degraded; so degraded that no forest can be counted here? This is India’s forest area — land classified as forests; land which is out of bounds for all other purposes than to grow trees on. Should this not be elaborated upon?

This is the real story of the state of our forests. And this is what we must understand and fix. Let me explain. 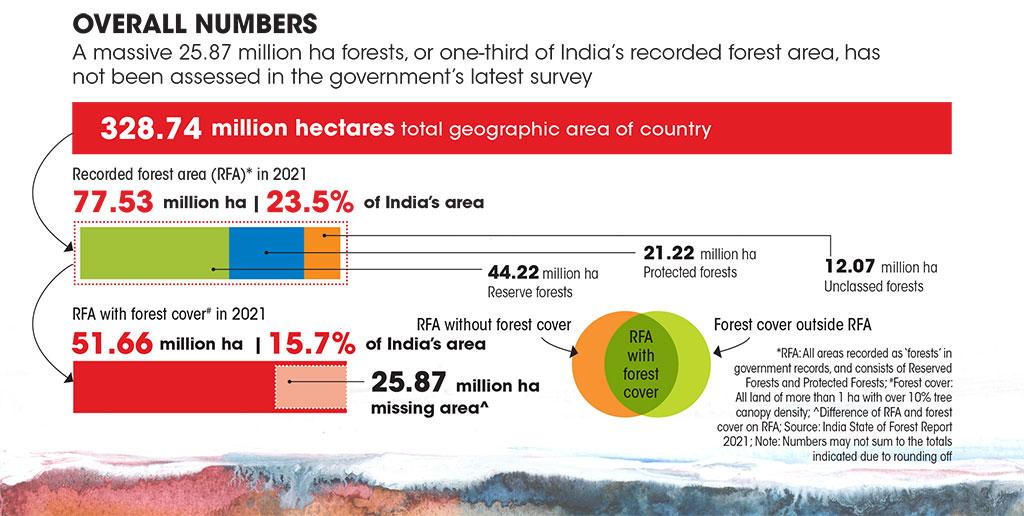 This is a difference of more than 6 million ha — not so significant, one might say. But this is not true. The difference adds up to 25.87 million ha — bigger than the size of Uttar Pradesh. And this is where the story of missing forests begins to unravel.

But forest cover is the actual area where there are forests. This is defined as all land of more than one hectare with over 10 per cent tree canopy density.

This could be very dense forests, moderately dense forests and open forests. In addition, there is “scrub”, which is forest land with canopy density less than 10 per cent and non-forest land that is not included in any of the above classes.

So, you would expect that the total recorded forest area under the forest department — 77.53 million ha — would get accounted in these different categories of forest: Very dense, moderately dense, open or scrub. But it is not so.

Only in one passing reference, almost as if by mistake, does ISFR 2021 mention that this is “recorded forest without forest cover”. This land is not even classified as “scrub”.

ISFR 2021 mentions that roughly 4 million ha is classified as scrub, but it is not clear if this is within the recorded forest area or outside.

In this way, the assessment completely misses out on explaining what is the state of land under the forest department, which is not included in the forest cover.

The size of this missing 25.87 million ha of forest is massive. This then is the scale of forest degradation in the country. So, let’s get real. Let’s get tough on the need for forest regeneration.

Land but no forest?

If you dive deeper to understand where these “missing” forests are, it becomes clear that large swathes of land under the forest department in key forested states are in this list.

Forested Madhya Pradesh is missing 3 million ha — the difference between recorded forest area and forest cover is close to 32 per cent; in Jharkhand the difference is over 50 per cent.

Even if it can be said that this difference is because of uncultivable forest land in the snow covered areas of high Himalayas, it cannot be the case for the bulk of this “missing” and deforested land.

More importantly, if this land was “scrub”, with little or no vegetation, it should have been accounted for as such.

Also, in some cases, mostly in the northeastern states of Arunachal Pradesh, Mizoram, Meghalaya and Nagaland, ISFR 2021 has higher forest cover in the recorded area, as compared to the area under the state forest department.

In these states forests are mostly under community control, and so, technically, the forests are outside the area of recorded forests.

How 25.87 million hectares got lost

There is no explanation provided in ISFR 2021 on this massive discrepancy — and only in passing does it say that this is recorded forest without forest cover. 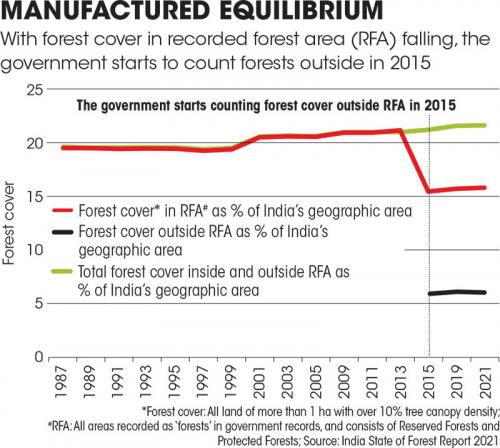 This lack of attention to the state of forests under the forest department is inexplicable. This when, the Forest Survey of India (FSI) has received digital boundaries of recorded forests from 24 states and Union Territories.

Where digital boundaries were not available, it has used the “greenwash” (area shown in green in Survey of India topographical sheets) as a proxy for recorded forest areas.

This would imply that there is a clear identification of this land and that it would be possible to use remote sensing combined with ground-surveys to map out the current state of its affairs.

An analysis of this from the very first State of Forest Report in 1987 shows for last three decades, the area in state forest records has remained constant — 23 per cent of the land. But what has changed is the analysis of how much of the forest cover is inside and outside this recorded forest.

It could therefore be argued that this “missing” forest was always missing. The satellite and ground-truthing assessment could not identify if this area of forest cover was outside or inside the legally defined areas. It has now been corrected. 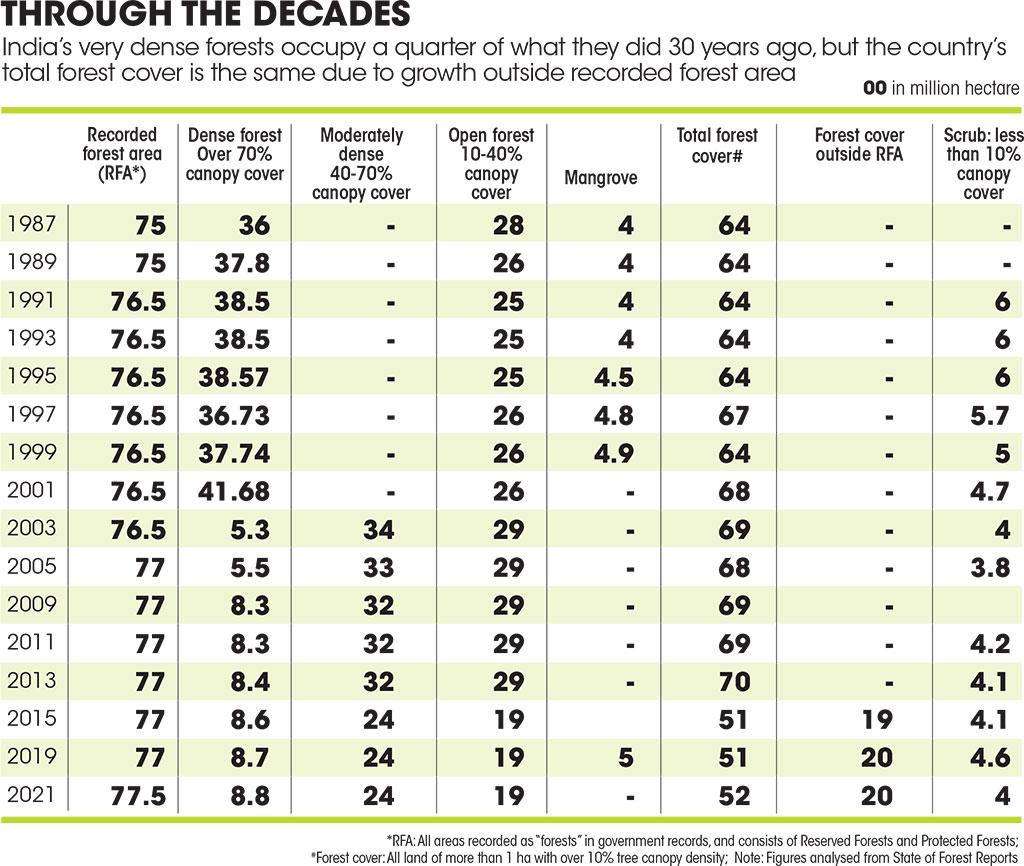 But that still does not answer the question. What is the “state” of the forest land which is specified for use for green cover? What is the forest department doing about this one-third of its land? And if it does not even qualify to be called “scrub”, then what is its state?

This could be forgotten — written off — if the size of this missing forest was not so massive. It is not possible to brush aside almost 26 million ha. This is land, which if available, should be used for growing trees.

If the remote sensing technology, used by FSI can count individual standing trees on land, it certainly can assess the state of this land — recorded as forest on paper. Otherwise, we have paper forests, not real ones.