The rights of the people were supposed to be settled under Section 4 of the Indian Forest Act; but they were not, eventually 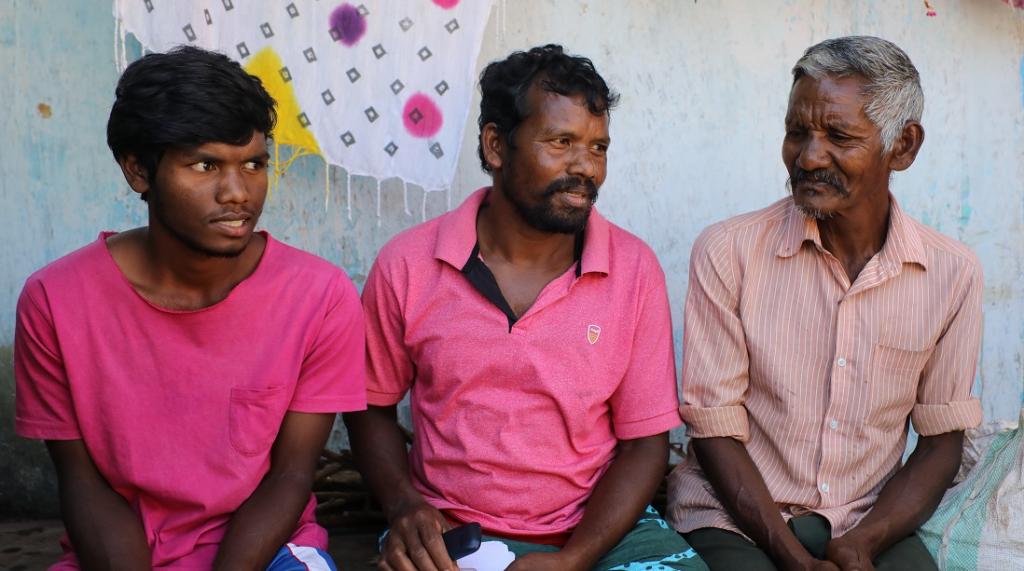 Chinayya (Right), the son of Vanthala Ramanna, with his son and grandson. They still live on land proposed to be a reserve forest and are technically 'encroachers'. Photo: Vikas Choudhary / CSE

In 1967, Neil Armstrong had not yet taken the giant leap for humankind, Indira Gandhi had not nationalised coal and in the Panasalpadu village of Andhra Pradesh, Vanthala Ramanna was still a young and unmarried man.

It was also the year when the Andhra Pradesh government decided to notify 150,000 acres of land in the coastal Visakhapatnam district as a reserve forest. This included Ramanna’s village too.

In these 53 years, humans have set foot on the moon and coal has been denationalised; Armstrong, the former prime minister and Ramanna are all dead.

But his forest land settlement is still pending, as is the status of the land that was to be declared as reserve forest in 1967.

Meanwhile, the land remains “proposed to be a reserve forest.” Neither the Indian Forest Act (IFA), 1927, nor the Scheduled Tribes and Other Traditional Forest Dwellers (Recognition of Forest Rights) Act, 2006, known as Forest Rights Act (FRA), have given any relief to the family.

A Section 4 notification under the IFA — the first step to start the process of notifying a reserve forest — was issued January 9, 1967.

Vanthala Chinnayya, Ramanna’s son born in 1973, is now a grey-haired grandfather of two, technically lives as an ‘encroacher’ on forest land.

While the world around has changed, for Ramanna’s family, nothing has changed for four generations. They still live on land proposed to be a reserve forest and are technically ‘encroachers’.

Around 71 acres of land in Panasalpadu, along with Ramanna’s six acres of patta land (land with title deed) were within the proposed reserve forest boundary.

The issuing of the Section 4 notification on January 9, 1967, should have ideally started the process of settling the rights of Rammnana and the 28,200 people in the area.

Huge swathes of forest land across India are stuck at what is called the ‘Section 4 forests’ stage.

There is no legal category of forest land called ‘Section 4 forests’. The IFA recognises only Reserve, Protected and Village Forest.

However, because the state forest departments fail to follow the law of the land, this has become an ad-hoc category. Combing through the forest department’s land records, one will invariably find ‘Section 4 forest’.

Under the provisions of the IFA — with some minor variation in the 14 states that have passed their own state forest acts — once Section 4 is issued, the state has to appoint a Forest Settlement Officer (FSO) to settle the land rights of the people living within the identified boundaries of the proposed reserve forest.

The FSO has to be a non-forest department official. The restrictions within a reserve forest are stringent.

Hence, the idea is that the FSO will either remove the lands belonging to the people as well as commons from the proposed area of the reserve forest, or these lands will be acquired under the land acquisition act.

The claimants have to approach the FSO within three months of the publication of the Section 4 notification, or else their right is considered extinguished. The claimants also have the right to appeal against the decision of the FSO in the Forest Court.

Only when this process of land settlement is complete, including the appeals, can the state government issue a notification under Section 20 of the IFA (or the relevant section of the state forest act) to finally declare a piece of land as a ‘reserve forest’.

However, for various reasons, this process was never completed in much of the forest lands across India.

What this means is that neither are the land rights of the people living in this 5,277 sq km of land settled, nor are these lands reserve forests.

This land is an in-between forest. These lands are a lacuna in the forest governance of India, detrimental to both the rights and livelihood of people and forest protection.

Buchiram Reddy, a 91-year-old retired forest officer from the united Andhra Pradesh forest service told Down To Earth (DTE), that because a revenue department official is given the extra charge as FSO, s / he has to do the survey and settlement, over and above his / her usual duties.

“Settling land rights is not an easy task. But despite the additional work, the FSO only has one helper. He simply doesn’t have enough manpower to complete the task,” he said.

Litigation, according to Reddy, was one of the reasons for the delay in completing the process of notifying reserve forest land.

“Because the FSO is a revenue official, with no stake in forests, they often see the settlement process as a money making opportunity. They award land to people who do not have a genuine claim. In that case, we appeal against the award. But due to the slow pace of judicial process in our country, these cases have remained pending,” Reddy said.

Reddy, who retired from the Anti-Corruption Bureau of Andhra Pradesh, where his expertise was such forest cases, said these court cases led to the rights of genuine claimants getting stuck.

This litigation process happened in the reverse in Panasalapadu.

The FSO awarded 71.83 acres of land to 81 people in Panasalapadu November 21, 2007. This was appealed against by the Narsipatnam Divisional Forest Officer within a years in the District Court, Visakhapatnam in 2008.

The appeal was against the award to Panasalapadu and 25 other villages in the division. Ramanna’s son, Chinnayya, was one of the respondents.

The court asked the settlement to be done again. The people, with the help of the non-profit Samata, challenged the order in the united Andhra Pradesh High Court.

The high court, in 2009, ordered the settlement to be done again within six months, along with providing legal assistance to the people. But nothing has been done till now.

“In 2009, after the High Court judgement, I met the Revenue Divisional Officer. He asked me to go to the Mandal Revenue Officer. When I met him he said my patta is being processed, but it never came,” Chinnayya said.

“The villagers had pattas issued by the British in 1932, but then the Andhra government came up with a new law and suddenly, they had to prove the ownership of their land again,” Ravi Rebbepragada of Samata said.

The villagers now don’t have any title for their land. The Integrated Tribal Development Authority takes care of developmental needs because of this being a Schedule V area. But the villagers can’t sell their land or get bank loans.

“I wanted to get a loan for cultivating coffee on my land, but I didn’t get it. I grow paddy,” Ramanna said.

Meanwhile, the fourth generation of the Ramanna family is still landless.

FRA was passed to address this very problem in the forest settlement process. The law calls it “the historical injustice”, which it aims to undo.

However, the law has been challenged in the Supreme Court by retired forest department officials and animal conservation organisations.

“The Union government, through the nodal agency for the Act, Ministry of Tribal Affairs (MoTA), is not directly involved in implementation matters. Therefore, it is clear that issues of implementation need to be resolved at the state level in terms of the statutory provisions,” the minutes of the meeting noted.

Meanwhile, in Panasalpadu, the rights recognition process hasn’t taken place till now. Last month, the villagers of Panasalapadu filed their claims under FRA, but are yet to get the land titles under the law.

While Ramanna was failed by the IFA, it seems for his son, justice is being delayed, and therefore denied, under FRA.