The Kenyan biosphere reserve is a UNESCO World Heritage Site 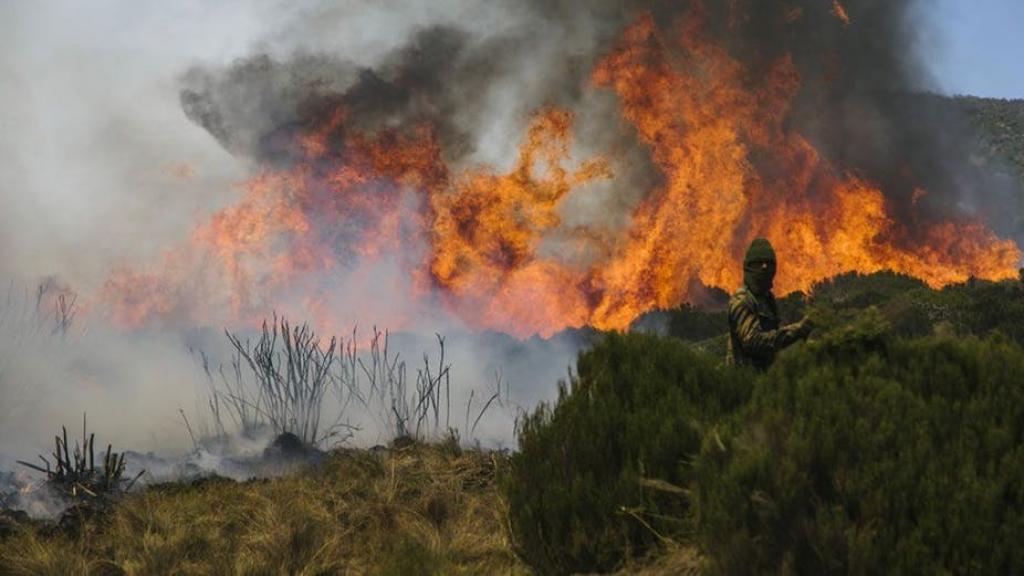 Raging fires are destroying parts of Mount Kenya National Park and surrounding areas. So far they’ve affected almost 20,000 hectares of land and killed wildlife. Fires on Mount Kenya are a regular occurrence, but the size, number, and severity varies from year to year depending on weather conditions. Some years, very little of the mountain burns, while other years there are large fires. This year over 100 forest fires have been reported.

Mount Kenya is the second tallest mountain in Africa. It’s a world heritage site and contains an incredible wilderness made up of lakes, glaciers, dense forest, mineral springs and rare animals.

The majority of fires on Mount Kenya are caused by people when they clear land with fire for domestic animal grazing, to gather honey, for cannabis cultivation and charcoal production. Also open burning on nearby agricultural fields, to prepare for planting or after harvest, can cause fires to spread into natural vegetation on Mount Kenya.

But the most important factor that affects fire risk is weather. Under dry, windy conditions a small fire can easily spread and become difficult to extinguish.

In a recently published study on fires between 2004 to 2015 we set out to identify where fires were happening. We did this by using satellite image data. This has been used in the US before and can help provide burn severity information after a fire.

Detailed fire history information isn’t available for Mount Kenya, so we wanted to see if remote sensing techniques like these can provide some of the missing data.

By using these techniques we could help predict future fires and where preventative efforts should be focused. We found that fires, mostly caused by people, coincide with dry seasons and vary greatly in size.

Based on our findings, we make a number of recommendations that we believe could help manage the risks better. This includes implementing fire danger rating systems that would discourage activities at certain times of the year when there’s a major fire risk.

We found that fires on Mount Kenya occur mostly in the Upper Montane Forest and Ericaceous Bushland vegetation, so those areas would be good places to target for monitoring and fire suppression efforts.

We found that the size of fires ranged from 150 hectares to almost 6000 hectares. The fires typically coincided with the two dry seasons (January to March and July to September), but most burned in the earlier dry season preceding the “long rains” (March to May).

This could explain the recent fires too. Since the region didn’t receive much rain during the 2018 “short rains” (October to December), the vegetation is probably very dry. Combined with hot weather and high winds that the area has experienced this year, it would be easy for a fire to ignite and spread – as we’ve seen.

Much of the vegetation on Mount Kenya is adapted to fire, like the Ericaceous Bushland. But there are still ecological effects that follow fire, like increased erosion and water runoff and wildlife losses.

The country’s water quality is also affected since Mount Kenya is the catchment area for the Tana River and Ewaso Nyiro River on which millions of Kenyans depend.

There are also long term implications.

While fire doesn’t necessarily lead to permanent forest loss, reduction in forest cover on Mount Kenya – one of Kenya’s water towers – has affected dry season water flows. This in turn impacts farming irrigation and hydroelectric power generation. The water towers are critical for Kenya’s water supply since the lower elevations are mostly arid or semiarid.

Since most fires are human caused, the best way to prevent them would be better monitoring and enforcement of human activities on Mount Kenya. However, it’s a very large and remote area and management agencies don’t have the staff or resources to cover the whole mountain.

Another approach that might prevent large fires on Mount Kenya would be to implement something similar to the US National Fire Danger Rating System. This system uses weather and fuel conditions to warn citizens about fire risk.

National maps are created on a daily basis and fire hazard conditions are posted on signs for visitors entering national parks and forests. Warnings include details about the safety of setting fires outside (for instance recreational campfires in the US). Such information would be useful in discouraging or prohibiting activities that pose a risk to major fires on Mount Kenya.