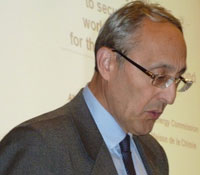 Following the stiff opposition in India to the proposed 9,900 (1,650x6) MW Jaitapur Nuclear Power Plant (JNPP), near Ratnagiri in Maharashtra, the French government is doing its utmost to allay the fears of civil society by sending its top officials to explain the safety of Areva’s Evolutionary Pressurised Reactors (EPR) which are to be to be used at Jaitapur.

Bernard Bigot, chairperson of the French Alternative Energies and Atomic Energy Commission, told reporters on Monday that nuclear safety authorities from Finland, France and the UK have approved the design of the EPR reactors. The evaluation of EPRs was carried out after the April 2011 earthquake in Fukushima, Japan, which was followed by a massive Tsunami, triggering a nuclear accident in the 40-year-old Daiichi nuclear power plant. Bigot was speaking to media persons after meeting Srikumar Banerjee, chairperson of Atomic Energy Commission (AEC).

“Various reports have given the green signal to the EPR design as it was found that there are no difficulties in the design. We are hopeful that the first EPR reactor will be working in Flamville in France by 2014. Besides, matters are also going well from the technical point of view, for the reactors in Finland,” he said. The interim report came out on November 10, while the complete report will be available in January, Bigot added.

There has been a great deal of opposition to the EPRs over the faulty design which has allegedly led to the delay in executing the nuclear projects in Finland and France. Anti-nuclear activists had questioned the safety of EPRs, but Bigot said that the first reactor at Flamville would be functional when installation begins at Jaitapur.

Referring to problems caused by earthquakes, Bigot declared that the Jaitapur plant was designed to withstand powerful jolts. “The plant can sustain an earthquake measuring up to 7.5 on Richter scale,” he said.

Reasserting French government’s stand on addressing safety concerns raised by various activists and organisations, Bigot said, “It is always necessary address the concerns and satisfy objections instead of setting up a project against popular resistance. Transparency is our top priority and it is the only way to move forward, when it comes to nuclear power. Nothing should be kept hidden.”