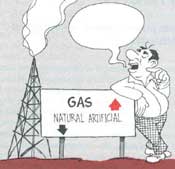 NATURAL gas is formed under the earth's surface when organic debris, under conditions of high temperature and pressure breaks down into methane and other smaller hydrocarbon molecules. Similar conditions simulated in the laboratory did not yield the requisite percentage of methane in the end product. Whereas natural gas contains 80 per cent methane, best results obtained in the laboratory did not exceed 60 per cent.

For three years, geologist Frank Mango from the Rice University in Houston, us, tinkered with the idea and hit upon the perfect recipe for natural gas Was. He heated a mixture of large hydrocarbon molecules, hydrogen and carbonich rocks to 190'c. for several days, with the resulting gas yielding a greater proportion of methane. The rocks used by Mango were similar to those found in the neighboorhood of natural gas pockets. These contained transition metals like ruckle and vanadium, which Mango believes act as catalysing agents speeding up the breakdown process of hydrocarbons into methane (New Scientist, Vol 147, No 1996).

Though other geologists agree with the basic procedure, they caution that to simulate a process in the lab which in nature takes millions of years to complete is very difficult. Secondly, rock chemistry alone may not be determining methane formation.