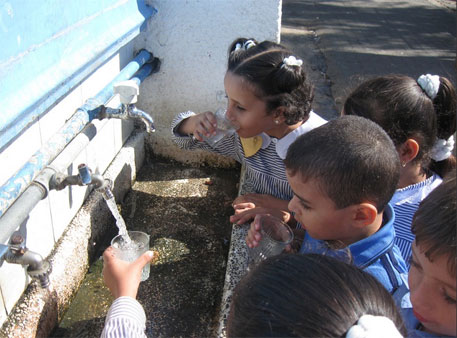 The ongoing air strikes by Israeli warplanes for more than a week now have not only claimed more than 150 lives in Gaza Strip but have also created a humanitarian crisis. The International Committee of the Red Cross (ICRC) has warned that as a result of the recent conflict, hundreds of thousands of people in Gaza are without water.

Since July 8, Israeli warplanes have struck more than 1,300 targets across Gaza, which is home to around 1.8 million Palestinians. Some reports also suggest that the Israelis had targeted water wells in different parts of Gaza where 90 per cent of water is now unsafe to drink.

"Water and electrical services are also affected as a result of the current hostilities. If they do not stop, the question is not if but when an already beleaguered population will face an acute water crisis," said Jacques de Maio, head of the ICRC delegation in Israel.

Gaza’s water system had been deteriorating for years. These strikes at a time when temperatures are on the rise have added to woes of the civilians. Health experts and rescue teams are worried as hospitals, refugee camps, schools, and homes all need water and electricity in order to function. According to ICRC, following the deaths of several municipal water technicians over the past few days, Gaza’s water service provider has suspended all field operations until the safety of its staff can be guaranteed. The non-profit has also urged parties in conflict to avoid harming civilians or civilian objects, and protect them from the effects of military operations. This includes protecting water technicians, water networks and electrical supply systems.

Maude Barlow, an expert with Council of Canadians and Food and Water Watch, has said that more than four decades of Israeli occupation has made it impossible to develop or maintain infrastructure for water in Gaza, causing the contamination of drinking water and many deaths.
It is believed that Israel has blockaded Gaza since 2007, denying the Palestinian people there basic rights.

Water as a weapon of war

If the situation continues for long, it would not be wrong to say that water is being used as a weapon of war in the conflict between Gaza and Israel. The tactic is already being used in ongoing conflicts in parts of Africa and West Asia. When water supplies in the besieged Syrian city of Aleppo were recently deliberately cut off by armed groups for eight days, at least 2.5 million people were deprived of access to safe water for drinking and sanitation. Before this, in 2000, the Syrian regime deregulated land use and gave vast quantities of land and water to its wealthy allies, severely diminishing the water table and driving nearly one million small farmers and herders off the land. This year in April, days before elections in the country, Iraq’s waters were seen becoming a weapon of war.

A US report, released in 2012, had said that beyond 2022, says the use of water as a weapon of war or a tool of terrorism will become more likely, particularly in South Asia, West Asia and North Africa.