Give native knowledge its due place 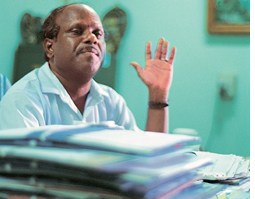 Ethnobotanist and director-general of Amity Foundation's Institute of Biotechnology at Thiruvananthapuram, Palpu Pushpangadan, tells P R J Pradeep that India can learn a lot from China about making native knowledge the basis of development

Now there is a skewed economy with a vast population of the underprivileged and a minority who go with first-world traits. The heavy dependence on western models at the cost of the native is showing in all fields. It may not be sustainable for long.

Statistics are being dished out that show that the Indian economy is developing at a fast pace.What makes you disagree? What statistics tell is important but what actually matters is what you see on the ground. As a man who has travelled across India, I see many problems. I have no hesitation in saying that India is a country of the malnourished. A malnourished people add up to an unhealthy nation.

In China, studies have shown that 65 per cent of the people have above average iqs. In India it is less than 20 per cent of the population. It is chronic malnutrition that over the generations that makes for this difference.

How do Chinese overcome this problem given its huge population? For India, the numbers are often cited as the obstacle.

Numbers do matter but with better planning and political vision, it is possible to eradicate malnutrition from the country. Low dietary inputs at a formative age damages a child's health. This also has forward and backward linkages and begins with the mother's health, and, in fact, still before that, with the care for the girl child.

How is China different in this aspect? China, from the days of the revolution, has made concrete policies aimed at correcting basic flaws. When I first visited China, I asked for cold drinking water at a hotel and they told me that the Chinese don't drink simple cold water. I was surprised to learn that the practice of drinking tap water was illegal in China. You get plenty of clean, boiled water everywhere at state expense. So starting from clean drinking water they have put systems in place. All of them carry a card and can get food at dirt cheap rates at any place. No one goes hungry in China for want of money. And it shows in their health. It also shows in their productivity. Look at the deluge of Chinese products in our markets.

Now think of India where millions of people have to go without food, even though we talk about the Green Revolution and food surpluses.

What are the differences in policies? The fundamental difference in the Chinese and Indian approaches to healthcare is one of assimilation and adaptation. The Chinese use western models but in an adapted form where native Chinese models have been given a pride of place. Native healthcare knowledge is part of the Chinese system, but in India there is a prejudice against indigenous systems. Our healthcare means modern medicine.

A yurveda, sidha, unani and other streams available as native medicine are frowned upon by policy-makers. Health management is becoming costly. The Chinese use native healers, herbal medicines and knowledge with great results. They also use the western model wherever necessary, but with prudence. I look forward to a day when ayurvedic practitioners, village healers and ancient home remedies get their due place in our policy.

Is it possible to restore native medicare streams in India? Why not, there are enough resources still available. It needs determined policy support. Simple practices that Indians follow merit support. For example, our food habits have a large spectrum of medicinal ingredients. If we can promote this with scientific reasons to go with, a lot can be done. The support of science is essential. Western science and healthcare go by validated methods and objective reasoning. We have no choice but to adapt those.

How can we set priorities right? Chairman Mao was a genius and could assimilate the best of what the West offered and adapt it with whatever was the best in China. This is where I wish our communists learn from China.

By investing heavily in food, clean drinking water and hygiene, the government will save immensely on healthcare. In China they give importance to mother and child care and have very low infant mortality rates. The opposite is true for India.