The Haryana government's recent decision to promote glass syringes is in the midst of a storm. It has, in fact, created clear factions; one that supports the move and the other opposing it. The fact that the Union ministry of health and family welfare is supporting the state's decision has further irked international agencies 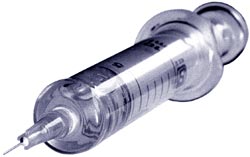 The Haryana government's recent decision to promote glass syringes is in the midst of a storm. It has, in fact, created clear factions; one that supports the move and the other opposing it. The fact that the Union ministry of health and family welfare (mohfw) is supporting the state's decision has further irked international agencies, such as the United Nations Children's Fund (unicef) and the World Health Organization (who). While these agencies are promoting auto-disable (a/d) syringes (which are used only once), the Haryana government says that reverting to glass syringes is 'safer'. According to B S Dahiya, director general of health services (dghs), Haryana, glass syringes were never banned in India, they were forced into obscurity as disposable syringes were being vociferously promoted.

While the Haryana government's decision drew flak from various agencies, it has also found ample support.
"Who says glass syringes are bad? If properly sterilised or autoclaved, they are better than the disposable ones. Boiling the syringes for 20 minutes can kill almost all the viruses such as that of Hepatitis and hiv," says Dahiya. When asked about the threat of infections, if the glass syringes are not properly sterilised, he claims that trained staff in most hospitals continuously monitor the sterilisation process.

Supporting the Haryana government's decision is the mohfw. " We do not want to promote disposable syringes as they are recycled and repacked," says Sobhan Sarkar, deputy commissioner (health), mohfw. He further says that glass syringes will continue to be used in immunisation programmes.

According to Dahiya, as compared to glass syringes, the disposable ones are collected by rag pickers, repacked and sold in the market. Under the Biomedical Waste (Management and Handling) Rules, 1998, the syringes should be destroyed in a prescribed manner to ensure that they are not recycled. But this is hardly done. A recent study conducted by New Delhi-based non-governmental organisation (ngo) Vatavaran reveals that of the 40,000 syringes used every day in Delhi, only 40 per cent are destroyed. The remaining 60 per cent are washed, packed and resold.

Environmentalists too support the state's decision. "Glass syringes are better as they generate lesser waste than a/d syringes. But the challenge is to ensure proper sterilisation and not use the syringes too many times," says Ravi Agarwal, coordinator of New Delhi-based ngo, Srishti, which deals with waste-related issues. Estimates point out that India annually generates 120 million syringes as immunisation waste alone (see: 'Flawed follow-up', May 15, 2003).
While there is a distinct group emerging which supports glass syringes, at the same time there is an equally strong one opposing it. "The world over, technology has moved away from glass syringes to disposable syringes to a/d syringes and now to uni-inject as sterilisation and maintenance of glass syringes is a big problem," says a representative of Hyderabad-based international organisation, Programme for Appropriate Technology in Health (path).

The Indian government's move is in sharp contrast to a recent declaration by the who, the unicef and the United Nations Population Fund. As per the declaration, by the end of 2003, all immunisation campaigns being organised by these agencies will only use a/d syringes. "Sterilised glass syringes can be used in hospitals and institutional set-ups, where we have facilities for sterilisation and autoclaving. But what about outreach camps for immunisation? How will a health worker carry these heavy equipments to far-flung areas?" asks the official from path.

Andhra Pradesh is already making headway in the field of a/d syringes, which are being used in immunisation programmes in 12 districts of the state.

Evidently, sterilised glass syringes will reduce the amount of waste generated and minimise the risk of infection. But the poser remains: who will ensure that they are properly sterilised? Till a feasibility study about the efficacy of glass syringes in India is conducted the debate promises to continue.