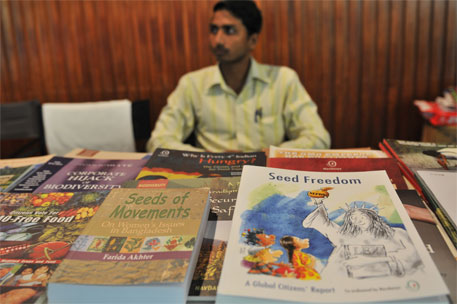 A global citizens’ report depicting the concentration and restrictions in the global seed sector as a result of the Intellectual Property Rights (IPR) regimes and corporate convergence was released on October 1.

Titled, Seed Freedom, the report has been written by over  hundred organisations, experts, activists and farmers, coordinated by Navdanya, an Indian non-profit working for sustainable agriculture and seed sovereignty.

It also captures the movements in the defence of seed freedom in different continents like America, Africa, Europe and Asia. It focuses on the need to stop seed laws that are preventing farmers from saving and exchanging their native varieties.

The report features voices and grassroot level examples, like the cultural implications of corn in Andes region, efforts of women farmers in India to keep their traditional seeds alive and the description of seed system in Africa. Prominent personalities working in the seed and food sovereignty sector who contributed for the report include Pat Mooney, Jack Kloppenburg and Salvatore Cecarelli. The report also contains names of over seven hundred folk and traditional rice and vegetable varieties of India.

According to Shiva, the global report focuses on three aspects. First, seed is the birth right of every farmer and food producer. “Farmers’ rights to save, exchange, evolve, breed, sell seed is at the heart of Seed Freedom. When this freedom is taken away from farmers they get trapped in debt and in extreme cases commit suicide. This is what has happened in India,” she says. Second, seed laws which are coming up in various countries, including India. “Though we have stalled the Seed Bill in India, legislations like these are coming up all over the world and there was a need to oppose them united at the global level,” she adds. Third, how seed freedom is threatened by patents on seed, which create seed monopolies and make it illegal for farmers to save and exchange seed. “Patents on seed are ethically and ecologically unjustified because patents are exclusive rights granted for an invention. Seed is not an invention. It is embodiment of bio-cultural diversity and contains millions of years of biological and cultural evolution of the past, and the potential of millennia of a future unfolding,” Shiva says.

The organisations will also launch a global campaign on seed freedom from October 2 to October 16—World Food Day. During this period, the Global Citizens Report on Seed Freedom will be released in Paris, Rome, United Nations headquarters in Geneva, Stuttgart, Istanbul, and at the CoP 11 currently underway at Hyderabad. The campaign aims to defend the cause of seed freedom and reverse the provision of patents on seeds.