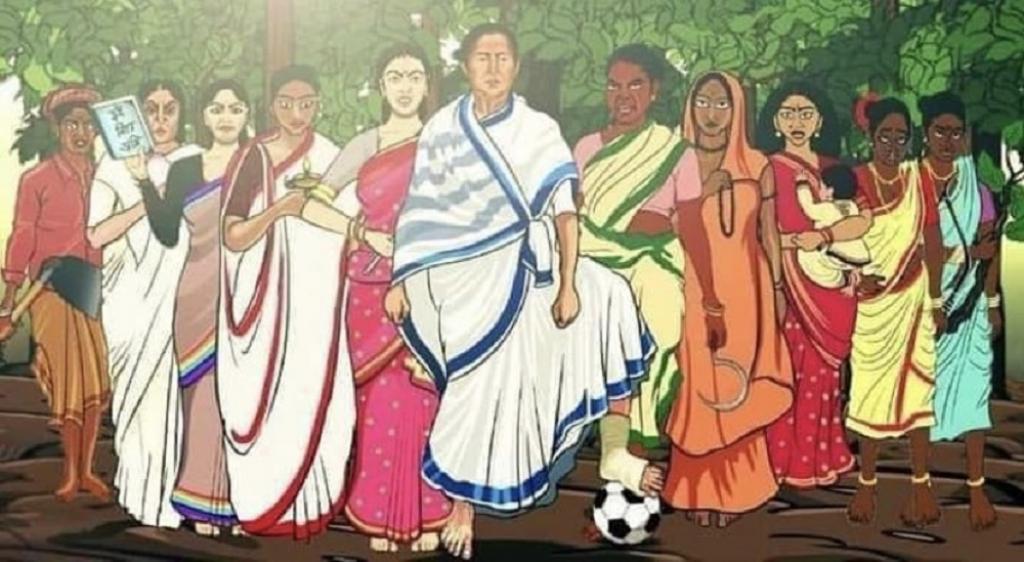 This painting showing Mamata Banerjee surrounded by other women has gone viral on social media. The artist is not known.

Women in West Bengal, cutting across social strata, demonstrated their political agency in the just-concluded Assembly election. They have come a long way from the days of voting under the influence or instruction of the family patriarch or the community, experts said.

Women account for 49 per cent of Bengal’s population. Their voter share during the eight phases of the election increased as the election progressed, according to poll data. It was more than half in some phases — exceeding the participation of male voters.

The incumbent All India Trinamool Congress (TMC)’s campaign was called Bangla Nijer Meyekei Chaye (Bengal wants its own daughter), projecting Mamata Banerjee as the chief ministerial candidate like the past two Assembly elections in 2011 and 2016.

A number of experts pointed to Mamata Banerjee as being a major factor in the political sensitisation of Bengal’s women voters as well as their gender assertion.

Working women such as agricultural labourers and others in rural Bengal and in other parts may have many complaints against the TMC government. But somehow, they feel this state is their safe space and their existence is not threatened here. For some reasons, they believe Mamata Banerjee is someone close to them and someone whom they can trust.

The participation of women voters during past Assembly and parliamentary elections in Bengal shows a steady increase, coinciding with Mamata Banerjee being elected as chief minister in 2011 and 2016.

Women in Bengal also voted on issues of daily existence in this election, having been sensitised about their independent selves and their fundamental democratic right to cast their vote prioritising their own issues.

In this election, there were certain issues that women voted for. For a lot of women, it was more basic things like Roti-Kapra-Makan or food-clothing-housing, given the still-continuing damage of demonetisation as well as the coronavirus pandemic and lockdown. After all, it is women who have to manage the family.

The ruling party floated a number of schemes during its tenure that appealed to women and made them vote for it.

The Swasthya Sathi card being issued only in the name of female heads of households, gave them a much-needed sense of entity. There were monetary benefits, of course. However, it was the recognition of women in family and society that influenced them to come out in large numbers as voters.

Women activists also urged the newly elected TMC government to speed up work on a number of women’s issues.

Ruchira Goswami, professor at The West Bengal National University of Juridical Sciences, said women could be voters and campaigns could be designed to allure them. But in reality, their participation in the workforce in Bengal, along with the rest of the country, was alarmingly low.

In Bengal, women form a fraction of the organised sector. They participate largely in the informal and unorganised sectors and also in unremunerated household work. Ensuring more participation of women in the workforce and ensuring their rights and demands are issues the newly elected government in Bengal must focus on, along with developing self-help groups and other income generating schemes.

The BJP pushed the idea of a traditional (Hindu) ‘good woman’, which was not well-accepted by the state’s women, according to a number of experts.

Women voters in Bengal not only supported Mamata Banerjee but also rejected the party (BJP) which had brought a number of laws at the Centre that were perceived as ‘anti-people, anti-citizen and anti-women’, Goswami said.

“Women may have voted in large numbers. But will they expect a more gender-sensitive policy or laws from the state government? That is too early to say,” Goswami added.