Inhabitants forced to enter forest areas that are home to man-eaters, other wild animals

The Sundarbans span over 4,000 square kilometres and consist of 102 islands Photo: Gurvinder Singh

The nationwide lockdown to curb the spread of the novel coronavirus disease (COVID-19) has forced the four million inhabitants of West Bengal’s Sundarbans area — famous for its mangrove cover — to choose between their lives and their livelihoods.

The Sundarbans have a unique geographical character: The area spans across 102 islands and has a thick forest cover that has become the source of livelihood for the area’s inhabitants and is also home to man-eating tigers and other wild animals.

The people of the region — who usually subsist from cottage industries across the area — were forced to venture into the thick forest cover, at the risk of their lives.

They were strictly prohibited from venturing into the forest during the lockdown, but often do so and lose their lives in the process.

Three people died in a week after they were attacked by man-eaters, according to local media reports. The youngest among them was 36-year-old Rathin Sarkar, a resident of Lahiripur village in Gosaba block who was killed on April 20, 2020.

The Sundarbans area is home to 88 tigers, a 16 per cent jump from the 76 recorded in 2014, according to data from a tiger census released by Prime Minister Narendra Modi last year.

The lockdown put an end to alternate livelihood schemes being run by non-profits and the administration to prevent people from going into the forest, said Prasenjit Mandal, the chairman of non-profit Sundarban Foundation, that runs a thread-spinning unit in the area.

“Most of the villagers now have no alternative but to bring something from the forest for their livelihood,” he said.

Sourabhi Roy has been out of work since a thread-spinning unit in her village shut soon after the lockdown was implemented on March 24.

The 65-year-old widow used to eke out a livelihood by working in the unit. She is now, however, dependent on free ration kits distributed by the administration and non-profits, for her sustenance. Her village, Bijoynagar on Sundarbans’ Bali islands — a few metres away from the mainland — is one of the most dangerous places to live in the area, as wild animals often venture into human habitats. 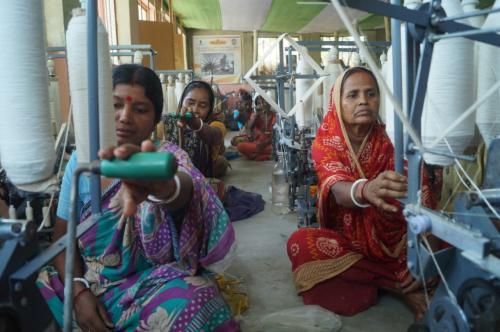 Thead-spinning units, a major livelihood source, have stopped work during the lockdown. Photo: Gurvinder Singh
Roy, who lost a son and a daughter after a tiger and crocodile attacked them almost a decade ago, questioned her sustenance on the ration being given out by the government.

“As if the dangers of wild animals were not enough, pangs of hunger are now going to kill us,” she said. “I might not survive longer if the situation remains the same for the next few weeks,” she added.

Roy is joined by thousands of widows from the Sundarbans, whose husbands or children have become the victims of tigers and other wild animals. The widows were eking their livelihood by working in different cottage industries, but have no work since the lockdown.

“We have to be very economical in our consumption of food grains or we would starve. The pandemic is like a curse to us,” said Subala Mandal, a 45-year-old widow involved in beekeeping to sustain her family.

“We also have other expenses on medicines and looking after our families,” she added.

Apart from the lockdown, the Sundarbans area also faces the brutality of inclement weather, adding to the woes of farmers, who said their standing crops were damaged because of frequent rains and hailstorms lashing Bengal in the past few days.

Suparma Deb Sharma, a 35-year-old farmer in the Sundarbans, said he borrowed money to cultivate paddy in his land. “Regular rains and hailstorms are destroying the crops. I was planning to earn money by selling the harvest but now everything will be lost,” he said.

“The administration has already banned the use of pumps for drawing ground water for irrigation due to depleting water level. The farmers are allowed to depend on canals for cultivation,” said Debasish Koley, a farmer.

Biswajit Deb Sarma, in-charge of Sundarbans co-operative, an initiative of the state government’s animal husbandry department, said around 8,000 farmers suffered because of unfavourable weather, out of which 2,200 farmers were in tbe area’s Basanti block alone.

“The crops of yellow petite lentils and paddy are getting damaged due to the prevalent weather conditions. Beekeepers are already out of business due to the lockdown,” he said.

The present issues will have a long-term affect on farmers and would also impact the co-operative’s functioning, said Sarma. “It seems that financial crunch would set in once the pandemic subside forcing farmers to take farming on a smaller scale,” he added.

The situation may worsen post-lockdown, according to Prasenjit Mandal, who said most people from the island, who work as migrant labourers in other parts of the country, would add stress to the farming land, once they return home.

“It might generate unemployment and could also lead to other illegal activities,” he said.