A shuttle service from Ludhiyana to Ambala covers around 50 km dropping migrant workers to a relief point, as an initiative of Highway Help Photo: Highway Help

Thousands of migrant workers — stranded in the Solan district of Himachal Pradesh because of the countrywide lockdown against the novel coronavirus (COVID-19) — are mired in debt.

The migrants claim to have received no help either from the 2,000 industrial units that operate there or from the state government.

The industrial area is estimated to have an annual turnover of more than Rs 60,000 crore, according to a media report. It also accounts for 89 per cent of the state's economy, according to The Tribune.

A major chunk of migrants were forced to take long journeys on foot or hitch rides on hired private vehicles to go back home. Many migrants reportedly borrowed money and slipped deeper in debt.

A large number, however, are still stuck and wish to return home. There is still no clarity on transport from the state government’s nodal officers, helplines or the state’s control room.

Faeem, a migrant from Banpur village in Uttar Pradesh’s Muradabad said he was tired of calling helpline numbers and nodal officers.

“A few times, when people on the helpline responded, they did not give me a clear reply,” he said.

Faeem’s mother is alone and sick in his village, a reason why he was stressed for a long time.

Several others like Faeem said though they registered themselves on portals for online registration of migrant laborers — initiated by both the HP and UP governments — they get no follow-up calls or updates.

Co-ordination with other states

Onkar Sharma, the nodal officer-in-charge for the movement of migrants in the state, did not respond to phone calls or text messages requesting comment for this story.

An official on the condition of anonymity, however, told Down to Earth some trains for UP did start after obtaining consent from the state.

Saligram Chauhan, a senior officer operating the helpline for migrants from Bihar who are stuck in Himachal Pradesh told DTE that discussions between the Bihar and Himachal Pradesh governments resulted in the state agreeing to pay for trains to send back migrants.

“At present, two trains from Kalka in Himachal to Kiul in Bihar could be arranged. The first one on June 1 left with 1,486 migrants. Nearly the same number is expected to board the train on June 2 as well,” Chauhan said.

A further arrangement of more trains, however, is not yet clear.

“The matter was stuck only with Bihar, while UP and other states paid for trains and buses for its natives stuck in Himachal Pradesh,” he added. 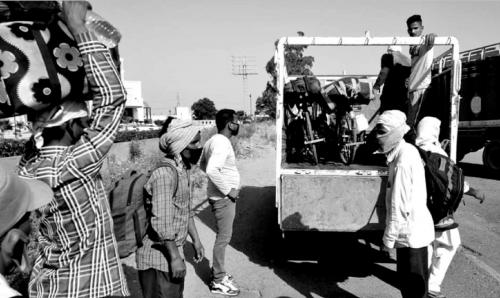 The migrants live in shanties, slums and congested dwellings in industrial areas and are at great risk of infection from the SARS-CoV-2 virus that causes the COVID-19 disease. A severe mental health crisis among the migrants has also emerged as a consequence of the lockdown.

Sushil Yadav, who is from Bihar’s Chhapra district said his savings were depleted three months into the lockdown.

“I had to borrow money to pay local grocers to feed my family and pay rent for my room. I have sleepless nights worrying about clearing my debts,” Yadav said.

Aditi Vajpeyi, a member of the Himachal Pradesh Workers’ Solidarity group said the labourers wished to return home, but were now under debt.

“They are facing the burden of clearing room rents and ration debts, making matters worse,” she said.

Another issue that has harmed migrant workers was the alleged inefficient distribution of relief and rations. Several migrants said they did not receive any ration kits from the government.

Chand Ram, who is from Bihar’s East Champaran district said nobody in his cluster received rations. Ram said his debt would have reduced had he received ration.

“Ration kits were distributed to several migrants repeatedly. It was found, however, that many people stored multiple kits, while some complained of getting nothing,” Sudhir Kumar, additional chief executive of the Baddi Barotiwala Nalagarh Development Authority told DTE.

He said the authority was now keeping track of those who received ration, adding those who did not receive any kits can approach his office.

Vajpeyi, however, insisted that a mechanism equipped with adequate relief ration with regular follow-ups must be provided to the families of stranded migrant workers without having to make repeated demands.

She also urged for a status update of the arrangements on the public domain through the media to provide information and clarity to the migrants.

Several migrants who walked to the UP border through Haryana’s Panchkula, around 40 kilometres away from Baddi, were caught by the city police.

“My entire group of 25 people was caught by Panchkula police at the Baddi-Panchkula border. We were put in a waiting centre for close to 10 days. We were released when a bus bound for the UP border came to fetch us. From the UP border, we took a bus to our respective districts,” said Ramesh Kumar, a worker from Bareilly.

Many were dropped back to Baddi by the Panchkula police, after noting their contact numbers and Aadhar card details. They were assured of being informed as and when buses for UP would be ready, said Vinod Prasad, a migrant worker from UP’s Bijnor.

He said he did not have Rs 15,000, the amount a private operator asked for to drop him to Bijnor on a sharing basis.

Private bus operators operated from Baddi with the permission of the administration, but charged exorbitant amounts from the migrants.

Around 30 organisations, including Himachal Pradesh Workers’ Solidarity, People’s Union for Civil Liberties and the National Alliance of People’s Movement (NAPM) wrote to the Union home ministry and the state chief minister demanding urgent action and coordination for the movement of stranded workers.

“The Uttarakhand High Court in a recent order had categorically put the responsibility on the host government to ensure migrant workers’ rights are protected,” said Meera Sanghamitra of the NAPM.

A few factories in the area still run their operations, despite a chunk of migrant workers leaving the state. The owners of these factories have not pushed for sending the workers home as there is a fear of loss.

“The infection cases are spiking. It will be difficult to adhere to norms like social-distancing in factories and I don’t want to risk getting infected,” said Prem Pal Singh, a migrant from UP’s Pilibhit.

“It is unimaginable to manufacture around 3.5 crore wooden boxes for the apple harvest without an adequate number of workers,” said Ashok Jain, the owner of a cardboard and wooden package factory at Baddi.

“The state apparatus must intervene, otherwise this small-scale industry will die,” he said.

Brijender Mehti, a contractor who appoints migrants in factories and charges 10 per cent of their monthly income as commission, said factory workers were initially in a hurry to sack workers without paying their dues when the lockdown was announced.

“Now, the reverse is happening as most workers are not willing to join these factories and want to go home,” he said.

The state apparatus is attempting to retain migrants, with some joining factories as well.

“The suspension and dilution of labour laws along with the provision of extension of working hours for adult workers from to 12 hours from eight hours — enforced by the Himachal government from May 21 to June 20 — should be immediately withdrawn,” said V Suresh, the general secretary of the PUCL.