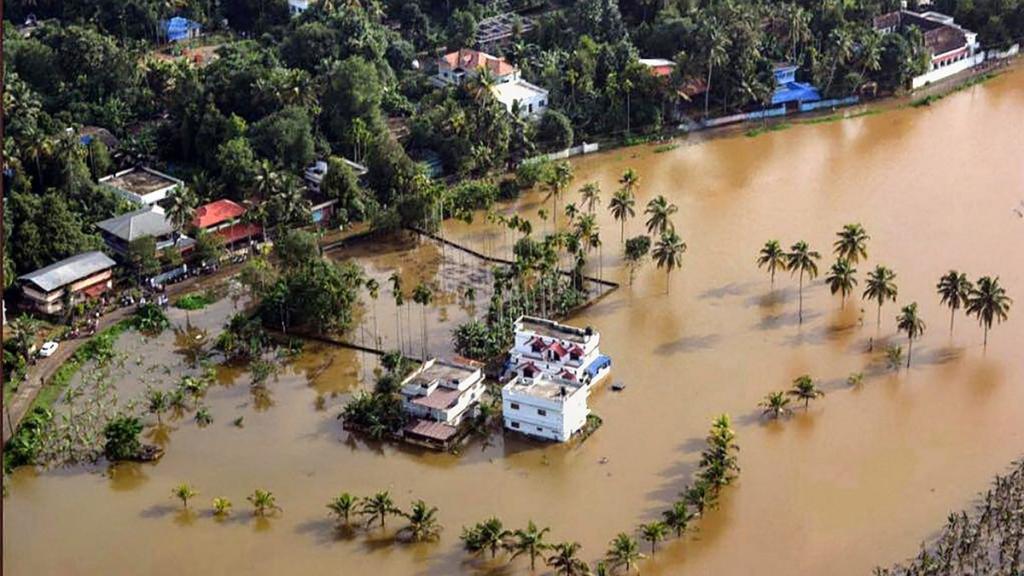 Could poor response on part of the Kerala government have caused the massive floods of 2018 in the state? A recent report by the Comptroller and Auditor General (CAG) has pointed at severe lapses on the part of the government in planning, capacity building, flood forecasting and dam management.

The report made some startling observations about the way the floods of 2018 and 2019 had been handled by the state government.

It stated that the flood plains of Kerala had not been identified and restricted so far. It noted that more than 14.52 per cent of the state’s total area was flood-prone.

Despite this, no large-scale flood hazard map was available in Kerala. The susceptibility map of the state developed by the Kerala Disaster Management Authority did not conform to Central Water Commission (CWC) criteria for flood-prone areas.

The report said the Kerala State Water Policy 2008 was not updated under the National Water Policy. It lacked provisions for effective flood control and flood management.

The report pointed out that the Disaster Management Plan of 2016 involved provisions for a State Emergency Operations Centre.

Such a centre was to be equipped with an intelligent decision support system capable of predicting and issuing early warnings on significant hydro-meteorological hazards.

However, the system failed two years after its completion in 2019 to give an early warning about climate hazards. This was because its effective functioning was dependent on the receipt of externally sourced real-time data. The real-time data is yet to be made available.

Provisions in the Kerala State Water Policy 2008 require preparing a state-level master plan for water resources development and also for formulating master plans for the major rivers of the state. It also stands for the constitution of a state-level authority for coordinating all water-related activities at the river basin level, but they were not complied with.

The report said a full-time residential training institute for civil defence was established at Thrissur five years ago, but it had not served the intended purpose.

The memorandum of understanding about the Aapda Mitra scheme was approved in November 2016. But procedural delays at different stages had resulted in emergency responder kits being handed out only by December 2019, the report said.

This was exactly a year after the first batch of Aapda Mitra volunteers had completed their training.

“The skills acquired by the volunteers for disaster mitigation were not used for the benefit of deserving local communities despite the severe floods affecting the state in August 2019,” the report said.

The Aapda Mitra scheme is a central sector scheme for training the volunteers in disaster response. National Disaster Management Authority (NDMA) is the implementing agency for this scheme.

The report said the Kerala government had also not submitted the list of reservoirs or areas where the CWC had to establish inflow forecasting stations.

“During the last five years, the state government failed to push forward any project to avail real-time data on rainfall and streamflow and it failed to deliver reliable data on a real-time basis,” it further said.

The CAG report was also highly critical of the continuing encroachments on river beds, which obstructed water flow during floods.

The airport authorities had even failed to construct a diversion canal adequate to carry the Chengalthodu waters during heavy floods into the Periyar river to avoid potential risks of riverine flooding to the resident population, the report noted.

It pointed out that only six rain gauges against the requirement of 32 gauges were available for rainfall estimation in the Periyar basin.

This, according to the CAG, raised concerns as the basin had witnessed heavy floods every monsoon since 2018.

Siltation in major dams was another matter of concern. “The government must depute an expert committee to suggest immediate measures to correct faults pointed out by the CAG,” S Usha, environmentalist, told this reporter.

No dam in Kerala had an EAP (Emergency Action Plan) despite the direction in this regard from the National Disaster Management Authority to have it by 2009, the report said.

The EAP is a written document prepared by each dam operator. It contains plans to prevent or lessen the impact of the dam’s failure or apparent structure.

The report said most of the significant reservoirs in Kerala were almost complete before the extreme rainfall in 2018.

They could not accommodate the additional flow, compelling the authorities to release a substantial amount of water from reservoirs at the peak of the rainfall in a short period.

The report pointed out that almost all dams released water only after the water level crossed the FRL (Full Reservoir Level) or reached the MWL (maximum water level).

The dam managers should not have solely relied on the India Meteorological Department (IMD) prediction for dam management. Variation in IMD forecasts could not justify the delayed release of water from dams, the report said.

“The CAG has confirmed the concerns we have been raising in the last three years. Despite the state continuing to reel under annual floods and other extreme weather events, the government is least bothered about evolving long-term mitigation measures,” VD Satheesan, leader of opposition in the Kerala Assembly, said.

“On the other hand, it is pushing forward several environmentally hazardous infrastructure projects which would further aggravate the impact of future calamities,” he added.

MM Mani, former Kerala electricity minister and currently a member of the state legislative assembly, accused the CAG of acting at the behest of the Centre to discredit the state government.

He told this reporter:

Kerala had witnessed unprecedented rains and floods in 2018 because of climate change. Nobody anticipated such a situation. We had no option other than releasing water from dams based on expert advice. Kerala has set an example in flood management at that time through a coordinated approach. I doubt the integrity of the report.

The report seems to have vindicated earlier concerns about the preparedness and response to floods in Kerala.

Amicus curiae Jacob P Alex in 2018, had informed the Kerala High Court that the sudden release of water from different dams simultaneously during the heavy rain in August 2018 had worsened the situation.

On its part, the government had rubbished Alex’s claims that dams in the state lacked both effective flood control zone and flood cushions.

However, the court found merit in the amicus curiae report and observed that all the 79 dams in Kerala were not operated or used for flood control and moderation.

In March this year, the Interdisciplinary Centre for Water Research at the Indian Institute of Science in Bengaluru released a study that identified faults in managing the water levels in the Kerala dams as the main reason that aggravated 2018 floods.

The study had pointed out that there were no rain warnings or warnings about the amount of water reaching the dams.