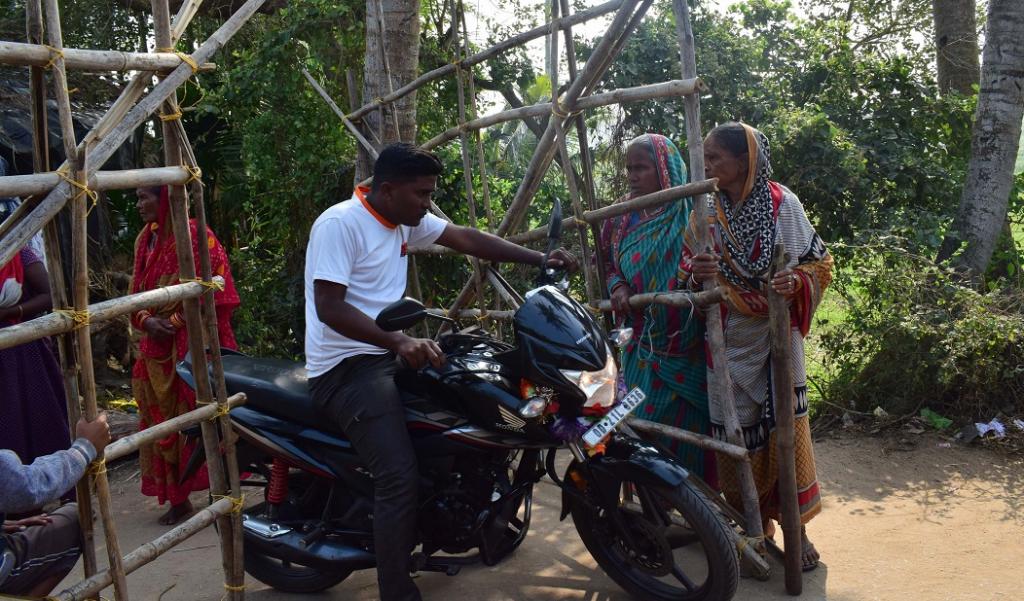 On the road to Dhinkia, a coastal village full of greenery near the port of Paradip in Odisha’s Jagatsinghpur district, around a dozen policemen stood near a few police vans. The road ahead of the vans had been dug to prevent them from entering the village.

Around 500 metres away, at the village’s entry point behind a bamboo gate, were at least 50 women who stared blankly towards the road, with fear as well as anguish clearly visible on their faces.

Weeks ago, the women had thwarted the police’s effort to arrest Debendra Swain, the samiti (council) member for Dhinkia Gram Panchayat. More than a hundred women had instantly rallied around to force the police to leave the village.

Since then, bamboo gates have been erected at three entry points to the village. “We guard the gate around the clock and keep a constant vigil to ensure that the police and administration do not enter our village at night to arrest our people,” Latika Parida, a woman in her mid-sixties, said.

So why are these women guarding their village?

They have been angered by the fresh land acquisition drive launched by the district administration for the proposed integrated project of Jindal Steel Works Ltd (JSW).

That project includes a 12 million tonnes per annum (MTPA) steel plant, a 900-megawatt power plant, a 10 MTPA cement plant and a captive port.

The JSW project is supposed to be set up more or less in the same area that was acquired by Odisha’s Industrial Infrastructure Development Corporation (IDCO) for the ill-fated steel project by Korean steelmaker Posco.

That project was stuck for more than a decade before falling through in 2017 due to stiff protests by villagers.

JSW needs around 3,000 acres of land for its project. IDCO had acquired 2,200 acres in the villages under Nuagaon, Gadakujanga and Dhinkia Gram Panchayats of the district for Posco, most of which would pass on to JSW.

The administration now wants to acquire 748 acres more for the new project, which come under Dhinkia Gram Panchayat.

The women in Dhinkia have accused the administration of intimidating people to make them agree to dismantle their betel vines and clear the way for the project.

They allege the police has slapped several cases against villagers as the administration has gone about demarcating and dismantling betel vines.

“The administration has stopped water supply to our betel vines. They want to destroy our livelihood for the benefit of the company and we will allow that over our dead bodies,” Kuni Mallick, a young woman, said.

Erasama tehsildar Choudhury Pragyananda Das said the administration has demarcated over 90 betel vines so far, of which 38 have been dismantled in Gobindpur and Patana villages.

“We are proceeding with our work in accordance with law and dismantling the vines with the agreement of the vine owners by paying compensation at the rate of Rs 17.50 lakh per acre,” Das said.

He refuted the allegations of forcible land acquisition. He said he was not aware of water supply to the betel vines being cut and would look into the matter.

In Gobindpur, however, many villagers said they had agreed to dismantle their vines with a heavy heart as the administration had not left them with any other choice.

Surendra Das, whose vine was demolished in a recent drive, said the government’s decision to push Posco’s project had already cost the area dearly with thousands of betel vines and lakhs of trees including fruit-bearing trees like cashew nuts gone forever.

“Now they are coming up with JSW’s project and I dread what devastation awaits us. Pana (betel), mina (fish), dhana (paddy) and kaju (cashew nut) are keys to our survival. If these are destroyed, we will be reduced to nothing,” Das said.

Fatigue is clearly palpable among the villagers after the decade-long anti-Posco struggle. The men especially seem to avoid confrontation with the administration.

The reasons are not far to seek. There have been too many police cases pending against hundreds of villagers. Besides, the people who led the anti-Posco movement have become silent about JSW’s project.

But the women are still ready to face the administration’s might. At the public hearing at Gobindpur November 26, 2021, while most of the village men refrained from speaking, an elderly Satyabati Swain accused the administration officials of being the company’s goons.

“We will not bow to the pressures from the government and company. We will reorganise to fight them and stop the project,” Swain, who was arrested during anti-Posco agitation, said.

In fact, when Posco first entered the scene in 2005, the women were the first to organise themselves under the Naba Nirman Sangathan. There have been instances galore where the women persuaded their menfolk to fight against Posco’s project.

There were quarrels within families over the issue but the women were successful in convincing their husbands that the steel plant would ruin their lives and livelihoods centred on betel vines.

The women turned up in hundreds at every meeting and protest march, outnumbering the men many times. They fought with the police as the administration went about its work of dismantling betel vines for Posco’s project and acted as shields for their men.

Stiff opposition to Posco’s project forced the administration to scale down the capacity of the steel plant from 12 MTPA to 8 MTPA, while the area was reduced from 4,004 acres to 2,700 acres.

This time around, as JSW comes with its project, the residents of Dhinkia are highly alarmed because their land is at stake.

Police have slapped several cases on the people of Dhinkia as the voice of protest against the JSW project has been raised from there. On the other hand, an eerie silence prevails in other villages whose land has already been taken by IDCO during the land acquisition drive for Posco.

Of the 748 acres to be acquired, 350 each fall under Patana and Malaha while the remaining 48 acres are in Dhinkia. “It is a conspiracy to break unity among the three villages and acquire the land easily,” Debendra Swain said.

Villagers across the three Gram Panchayats admit that though many men have changed their views on industrialisation, perhaps due to fear or allurement, the women have been unshakable in their stiff resistance to the steel projects — be it that of Posco earlier or JSW now.

A government official engaged in land acquisition work said unlike the women in Dhinkia, women in other villages in the affected area may not be vocal at the moment due to several factors but it is clear that they have only disdain for administration.

“If a survey in the eight villages under the three Gram Panchayats is done, one will not find a single woman supporting the industrial project. There is a lot of pent-up anger and if they manage to organise themselves and their men as in the past, we are heading for another conflict,” he said.