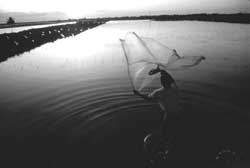 contrary to the statistics published by the United Nations Food and Agricultural Organisation (fao), which indicate that the global fish catches are stable, fisheries scientists at the University of British Columbia (ubc), Vancouver, Canada, have documented evidence that catches have been declining for over a decade. This new evidence means that the true state of the oceans is far worse than what anyone has previously realised. "The global catch trend is not increasing, it is not even stable, but rather it has been decreasing steadily since the late 80's," states Reg Watson, one of the study's authors.

At present, only the fao maintains global fishery statistics. As an un organisation, the fao only receives and is not able to verify the statistics reported by member countries, even when they are suspected of being wrong. No mechanism exists for independent verification of catch reports.

"The bottom line is that the downward trends in global fish catches have been obscured. Fisheries management and economic decisions are being based on flawed data," says Daniel Pauly, another author of the study. The fisheries scientists say that "vast over-reporting by China combined with the large and wildly fluctuating catch of a small fish called the Peruvian anchoveta, have painted a false picture of the health of the oceans by inflating the catch statistics and implying that business as usual is sustainable." "These earth-shaking findings are the most significant fishery and food security results in decades," says Jane Lubchenco, a professor at Oregon State University, usa. " They call into question the very basis of international fisheries management," added Lubchenco ( www.nature.com , November 29, 2001).

Using catch data collected by the fao and a statistical analysis that compared the predicted fisheries against those reported, the scientists showed errors in the official fishery statistics. According to them, the huge discrepancy between what is reported and the true state of global fisheries is largely due to mis-reporting by countries with large fisheries. "Many countries over and under-report their catch statistics, but none has as big an impact as China," says Pauly. Although Chinese waters cover only one per cent of the world's water surface, the country accounts for 40 per cent of the deviation between reported and corrected, the scientists found. "Our studies showed that whatever leaders set as production targets is what is officially reported. If you dictate fisheries to increase by five per cent then it is reported to increase by five per cent," says Watson.

The inflated statistics have led to complacency about the need to more effectively manage fisheries. They have also resulted in unwise investment decisions by banks and industry. Pauly hopes that the study will remove what he calls "a psychological weapon" -- the distortions in the global reports submitted to the fao -- that industry has used to justify putting out more boats and building bigger trawlers.

This new picture of the state of the oceans raises concerns about the supply of fish and world food supply, and its ability to keep up with a rising world population. Some governments and industries believe that aquaculture is the solution. But Watson and Pauly warn that it is a fallacy to believe that fish farming can make up the shortfall, and they caution against their results being used to call for more aquaculture.