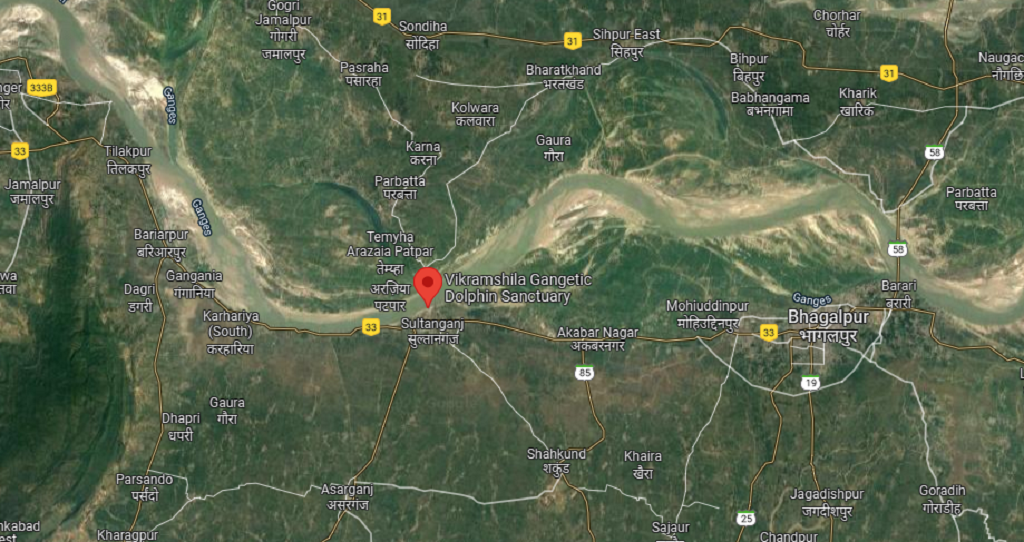 Till last week, Bhagalpur Smart City Limited officials, along with other private agencies, were constructing the riverfront in the area under the Vikramshila Gangetic Dolphin Sanctuary (VGDS) in Bhagalpur in violation of Wildlife Protection Act, 1972.

The sanctuary, spread over 50 kilometres along the river, is considered a safe hub for the endangered dolphins. Bihar is home to around half of the estimated 3,000 Gangetic dolphins in the country.

Last week, the construction work near Barari Pul Ghat in Bhagalpur was stopped because it was in violation of the Wildlife Sanctuary Act and did not have proper clearance and permission, said a forest department official April 27, 2022.

For the last eight days, the construction work remained closed due to lack of no objection certificate (NOC) from the forest department as construction of the riverfront was in VGDS, an ecologically sensitive location in river Ganga, they added.

”We have been forced to stop construction work of the riverfront as agencies engaged in construction have not obtained NOC under the Wildlife Sanctuary Act for their work,” Bhagalpur Divisional Forest Officer Bharat Chintapalli told Down To Earth.

“Our first concern is conservation and protection of endangered Gangetic Dolphin in the VGDS and we cannot ignore danger to it,” Chintapalli said.

Construction of concrete buildings has been prohibited within 200 metres along the bank of Ganga, Singh said. In case of the riverfront construction in VGDS, it is a matter of serious concern.

The National Green Tribunal has also barred construction of buildings within 200 metres along the bank of Ganga.

However, sources in Bhagalpur Smart City Ltd said the forest department decision to stop construction of the riverfront was informed to the concerned department in Delhi for early clearance to restart the work.

Gangetic dolphins live in a zone where there is little or no current, helping them save energy, experts said. If they sense danger, they can dive into deep waters, Singh said. The dolphins swim from the no-current zone to the edges to hunt for fish and return, he added.

The species is found in India, Bangladesh and Nepal. It is blind and finds its way and prey in the river waters through echoes.