Government quells homestead land rights protest with yet another assurance 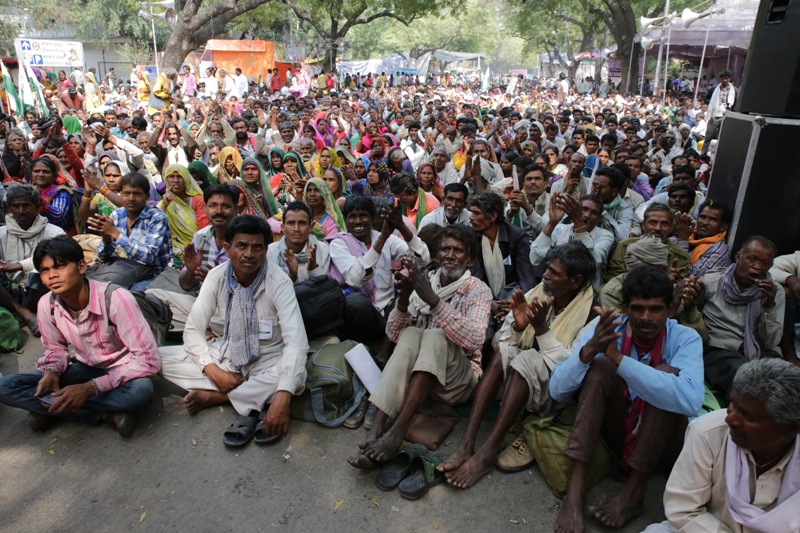 Following a two-day protest by more than a thousand landless rural poor at Jantar Mantar in New Delhi, activists claim Prime Minister Narendra Modi has assured protestors that the government will bring the Bill supporting homestead land rights for them before the Parliament.

Land rights activists, who met the prime minister at the Parliament on March 15, are demanding that the government allot at least 394 square metres of land to the landless poor in rural areas.

The protest was organised by Delhi-based non-profit Ekta Parishad and called “Parliament of the Landless”. P V Rajagopal, founder president of Ekta Parishad and one of the two activists who met Modi, said the rally was held to protest against the failure of consecutive governments to bring the draft land reforms Bill in Parliament.

“According to the socio-economic caste census, there are 106.9 million landless families in the country. Dignity, security, identity will come to the poor if they have a proper address,” he said. Rajagopal has been advocating for land rights for more than two decades.

Backtracking on the Agra agreement

In October 2012, more than 100,000 landless poor had started marching from Gwalior to New Delhi to demand homestead land rights. But the rally was called off in Agra when then Union rural development minister, Jairam Ramesh, agreed to bring the land reforms Bill in Parliament.

“That agreement constitutes a 10-point agenda which the government has to implement at the earliest but no concrete step was taken to address our issues,” said Rajagopal while talking to Down To Earth.

The 10-point agenda consisted of bringing a national land reform policy through which homestead land rights would be given to the landless. The agreement also included setting up of a fast track land tribunal to solve all land-related disputes, formation of a task force to oversee the land reforms process and implementation of the Forest Rights Act.

“The UPA government had drafted the National Land Reform policy but didn’t introduce it in Parliament. They also formed a task force which became defunct after the new NDA government came to power. No concrete measures have taken up since then to address our issues,” he added.

In February 2015, more than 8,000 people had held a protest on Parliament Street in New Delhi to demand the implementation of the 10-point agreement.

“At that time again, the new NDA government had promised people to bring the Bill in Parliament, but there have been no developments yet. That is why we held the protest again this year,” Rajagopal said.