Indira, Manmohan, Modi: Why all see civil society with suspicion 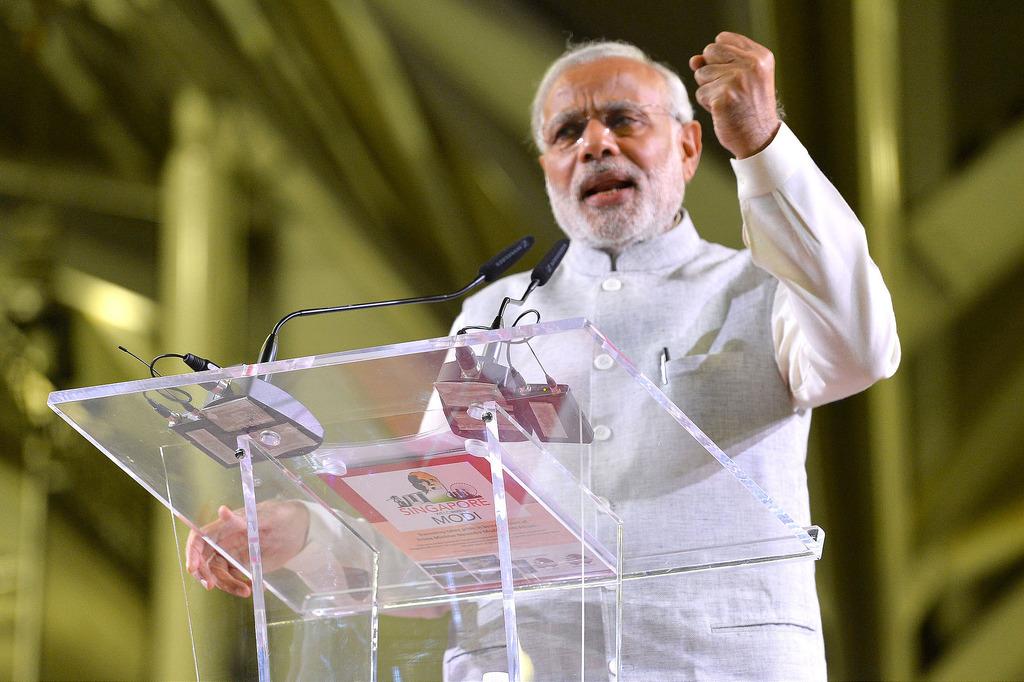 Looking at the activists arrested and their respective field of work – both issue and geography-wise – it clearly emerges there is a pattern to government’s crackdown. Credit: Narendra Modi/Flickr

For over 20 hours now, the arrests of five human rights activists and campaigners from across the country have been raising questions, literarily as heavy and dense as the clouds over Delhi today. Are the allegations against them tenable?  Is this just a legal persuasion or part of a larger scheme to selectively target certain groups of people leading charges against government’s policies and programmes? There are many such questions.

The Supreme Court in a few hours will hear a petition challenging the arrests of five known activists (Maoist ideologue Varavara Rao, lawyer Sudha Bharadwaj, activists Arun Fereira, Gautam Navlakha and Vernon Gonsalves) in a sweeping police raid on August 28. But irrespective of the outcomes, it is clear that the National Democratic Alliance (NDA) government (read its political leadership) has just pushed the relationship between the government and the civil society to an unfathomable depth.

Since it came to power in 2014, NDA has not hesitated to crack down on civil society groups, often questioning their credibility and dubious agenda to “destabilise India’s development”. Before, the relationship between the two wings already took a beating when anti-corruption campaigner Anna Hazare took on the then United Progressive Alliance government headed by Manmohan Singh during 2011-13. It is widely believed that Hazare’s campaigns ultimately led to the ouster of the then government as corruption emerged as the main issue in the general elections in 2014. NDA led by Narendra Modi just yielded electoral fortunes out of this.

One way, the latest arrests are just a new episode in this long-running feud between the government and non-government organisations, bundled together as civil society.

Arrests preceded by years of antagonism

Looking at the activists arrested and their respective field of work – both issue and geography-wise – it clearly emerges there is a pattern to government’s crackdown. Each of them has been raising voices over tribal and dalit rights over resources and for human dignity. The geography of their works is more pronounced in term of attributing intent to their arrests. Wherever there are violent or consistent protests against land acquisition for development projects or against high caste dominance over resources, these arrested activists are found the strongest voices supporting the former. Many of them are in fact engaged in long-running legal battles with governments.  So, the arrests are preceded by years of antagonism between government and civil society groups.

At the same time, these arrests come at a time when there are widespread protests by various groups – from farmers protesting market glut, to forest dwellers fighting for land allotments under the Forest Rights Act to socially disadvantaged groups demanding punishments for perpetrators of violence against them.

Just a back of the envelop calculation points out some 300 such protests in 2017. And each of this protest/campaign has a deep engagement of civil society groups both as defenders of rights and justice and also as active supporters. They are being now termed as the urban Maoists or Naxalite.

Hey @vivekagnihotri, I volunteer to be on your list. Let's tag @vivekagnihotri with the hashtag #MeTooUrbanNaxal and help him build his list. We should all help this man in his noble endeavour. https://t.co/zY1Azarv8l

In 2017 India was rated as the country with maximum environmental conflicts in the Environmental Justice Atlas. The country had 271 cases. These cases invariably involve government and industrial houses in one side while in the other side are the communities and legitimate supporters like the ones arrested.

But it is not for the first time that government under a particular political ideology has cracked on civil society. Starting from the late Indira Gandhi to Manmohan Singh to the current Prime Minister Narendra Modi, all have questioned the credibility of the civil society.

This has been pronounced particularly when each of their governments faced a rough patch. The late Gandhi took alleged civil society groups to be backed by “foreign hands” and her allegation was for her political opponents as well. This was just before her imposing internal emergency and ultimate defeat in general elections in 1977. The former Prime Minister Singh as well alleged the hand of foreign players behind many campaigns led by civil society groups in an interview with a science magazine.

This was at a time widespread corruption cases were being reported involving his cabinet colleagues and the economy was slowing down. And Modi and his government are already known for their repulsion to “NGOs”. Modi has been target of many rights campaigns related to the communal riots of 2002 in Gujarat when he was the state’s chief minister. Often his ministers allege foreign funding of civil society groups works against the country’s development agenda.

Immediately after Singh’s interview that alleged foreign hands behind many campaigns by activists and rights groups, the then UPA government began an extensive scrutiny of NGOs that received money from foreign donors. The Directorate of Revenue Intelligence and the Central Economic Intelligence Bureau probed 77 NGOs that received money from the US and Europe. The list of NGOs for scrutiny was prepared much before the interview; coinciding with the anti-corruption campaign of Hazare. The Ministry of Home Affairs informed Indian missions across the globe to keep a tab on the activities of these 77 NGOs.

To join the dots, Singh’s statement coincided with the boom in business related to natural resources— opening of mining, extensive forest clearances for infrastructure and industries, and private land acquisition. These were (and even now) widely protested by communities in Chhattisgarh, Jharkhand and Odisha. Civil society groups played supportive roles in these protests, including those who have been arrested now under the NDA regime. It was clear that the then UPA government didn’t know how to manage this dissent. That was why the reaction appeared vindictive.

The NDA government just continued with this strained relationship. It intensified the earlier government’s crackdown on funding of NGOs. It further put conditions on them for compliance of audit. The first law that it wanted to amend was the land acquisition one that gave certain rights to communities whose lands were to be acquired. After widespread protests that include the opposition from the Congress party, it had to abandon this.

In June this year the news site firstpost.com reported, “In a closed-door, high-level meeting, Prime Minister Narendra Modi has asked top security officials to work with the state police to monitor how NGOs and groups suspected to be involved in anti-national activities are funded. Top sources said Modi recently expressed concerned over the subject, and that the Ministry of Home Affairs will engage with states to deal with the matter.” The news site also reported, “On 1 June, Minister of Home Affairs Rajnath Singh launched an online analytical tool to facilitate closer monitoring of the flow and use of foreign contributions organisations registered under the FCRA receive. The tool enables decision-makers in various departments of the government to scrutinise the source of the funds and their actual use in the country.”