Over 6,000 companies are required to spend on corporate social responsibility. But two-thirds have defaulted and there is no penalty 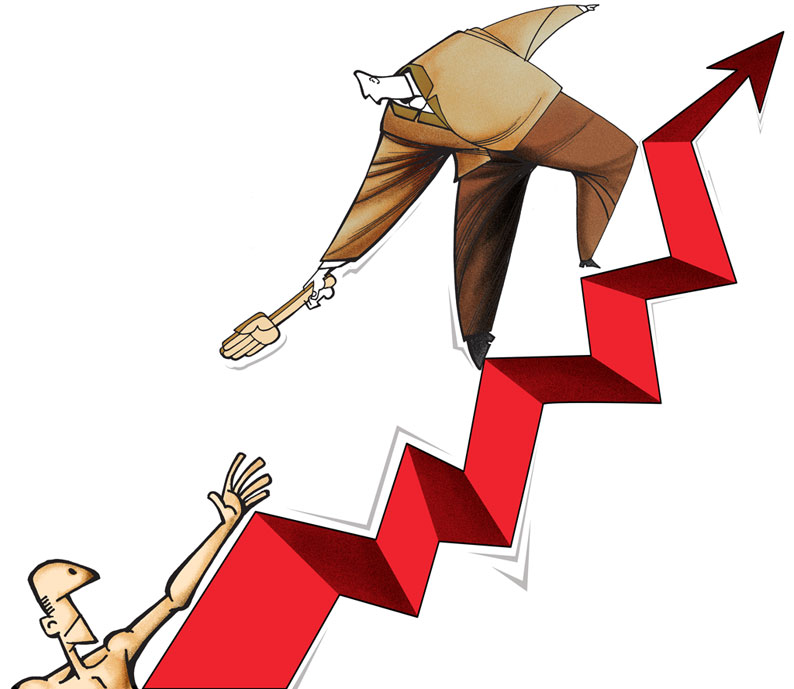 For India's corporate world, it is a unique season. Chief executives have been nervous about their annual reports, but for a completely new reason. As a senior vice president of an insurance firm says, companies are not just monitoring the net profit, but another key aspect: the spending under corporate social responsibility (CSR). For the first time companies are filing their annual reports that will show their legally mandated expenditure on CSR.

On April 1, 2014, India became the world’s first country to legally mandate CSR. The Companies Act, 2013, made it mandatory for companies with a net profit before tax of at least Rs 5 crore, or a net worth of at least Rs 500 crore, or a turnover of at least Rs 1,000 crore to spend two per cent of its average net profit before tax of the preceding three years on CSR. Some 6,000 companies are required to invest in CSR under this provision. But according to the preliminary data with the Ministry of Corporate Affairs (MCA), two-thirds of the companies have failed to meet the two per cent spending mandate.

All eligible companies are required to constitute committees to set CSR objectives and monitor their activities. They are also required to mention CSR details in their annual reports. The investment can be made in areas like education, health, sanitation and environment. The CSR activities can be channelised through a foundation formed by the company. However, the activities should not target welfare of employees and should not be in the area of operations of the company.

As companies file their annual reports, it seems that India’s experiment with corporate social spending has been part success and part failure. Down To Earth spoke to senior officials of several companies about their assessment of the CSR investments. Most of them agreed that while spending at the company level has gone up, confusion over the legal provisions is holding many companies back from spending. An assessment of consumer goods company by financial daily Mint says that though this is the first year of implementation, CSR spending has went up by 57 per cent over the previous years.

MCA had expected that CSR would generate Rs 10,000-12,000 crore in 2014-15. “But investments worth only Rs 4,000 crore have been made so far,” says Jatinder Singh, secretary, PHD Chamber of Commerce and Industry. The corporate affairs ministry has already set up an internal committee to assess why the investments under the CSR laws have been below expectation. Going by their annual reports, companies like Reliance Industries Limited, Wipro, ITC, Hindustan Unilever and Mahindra & Mahindra have not just met the target but exceeded it. However, there are also companies that have been unable to meet the target. Bharti Infratel Limited and Dr Reddy’s, for instance, have spent 1.8 per cent and 1.74 per cent of their profits, respectively, on CSR (see ‘Who stands where’). 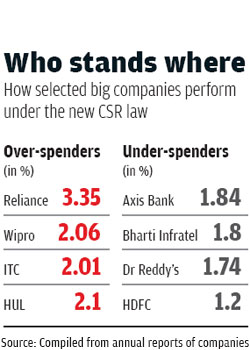 But most of the companies are spending on areas mandated under the law. “A lot of the funds appear to be going for education and health. These investments also help in improving company’s brand value,” says Rajiv Kumar, senior fellow at the Delhi-based think tank, Centre for Policy Research, and former secretary general of the Federation of Indian Chambers of Commerce and Industry (FICCI). Multinational corporations like Reliance Industries Limited and Bharti Infratel Limited have spent majorly on rural health and education. Similarly, Dr Reddy’s, which is spending most of its CSR money on education and health, is just continuing the company’s CSR spending policy. In 2013, a survey of CSR activities of 50 companies by audit firm Ernst and Young showed that most of the spending was on health, education and rural develop-ment. All the companies, the survey found, had initiatives in the education sector.

No penalty for defaulters

Notwithstanding the good performers in the first year, the Act suffers from a major flaw—it doesn’t penalise a defaulter but just requires that the company “explain” the reasons for its failure to spend. Many companies are now precisely doing this. For example, Bharti Infratel Limited, in its annual report, says: “Out of the total CSR allocation of 192 million (Rs 19.2 crore), a balance of 19 million (Rs 1.9 crore) was left unspent due to extensive time spent on research and deliberations on social concerns/locations of intervention.” Similarly, Dr Reddy’s has explained its inability to spend the mandated amount to lack of “receiving system”.

Recently Maneka Gandhi, the Union minister for women and child development, criticised corporate houses for not taking the CSR target seriously. This was in response to Corporate India’s unenthusiastic response to Prime Minister Narendra Modi’s call to corporate houses to donate or use the CSR route to fund his flagship Swachh Bharat Abhiyan. But many corporate officials point out that there is a confusion over the law because of the constant change it is going through. In the last one year, rules have been changed more than a dozen times—either deleted or clarified, leading to new interpretations. For example, just a day before the law came into force, the government brought in changes in the list of activities eligible for CSR funding by including activities promoting healthcare and preventive healthcare. In January this year the government clarified the types of organisations through which the CSR money can be spent. “By then, we already had our strategy ready based on earlier rules. But we had to change our strategy, which disrupted our spending,” says a senior official working with a telecom company.

By October, when annual reports of all the companies are usually in, India would get an overall picture of how its legally binding CSR spending has performed. Hopes are, however, high. “Gradually, companies may start incubating social responsibility as part of their business,” Kumar concludes.